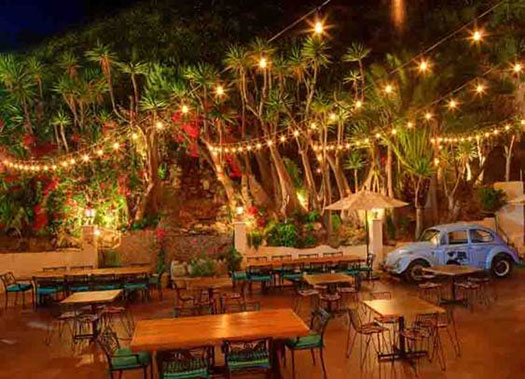 Looking for a new spot to stargaze? Whether you're interested in the celestial kind or the celebrity ones, stars are abundant at the World Famous Malibu Inn. The beachside eatery, along the most iconic stretch of the Pacific Coast Highway has been revamped but still maintains its history.

In 2011 the Malibu Inn went through a make-over complete with pool table and murals. The LA Times calls the look "Thrift-store chic." The re-design did not completely change the historic setting, rather it just added to it. The place that was the hang out for the likes of Gloria Swanson in the '20s and was once owned by Neil Young, now hosts the biggest names in town.

Recent high-profile visitors have included Adam Sandler, Britney Spears, Pierce Brosnan, Gerard Butler, Cuba Gooding Jr., Courteney Cox and Haley Joel Osment. But don't worry, even if an A-lister is not there when you stop by, you'll probably catch a glimpse of a celebrity in the kitchen since the menu was designed by Top Chef Season 7 runner-up Angelo Sosa. The stars reportedly flock to the establishment for the Fried PB&J Sandwiches and the Fish and Chips and Popcorn Shrimp.

The Malibu Inn is also known for its star-studded music scene. Samantha Ronson has a residency every Wednesday night and 45 Grave will be putting on a frightful Halloween show. On December 1 supergroup Attika 7 featuring Hell's Angel and Sons of Anarchy actor Rusty Coones will perform.