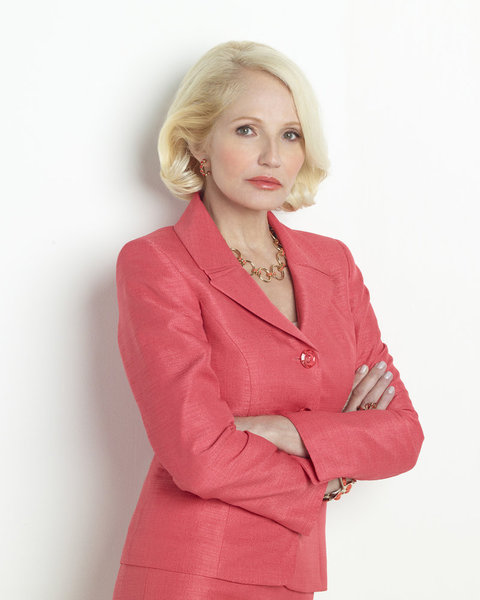 If you had asked people back in 1967, if they could have learned a lesson from a small-minded bigot like Archie Bunker, they most likely would have said, ‘No way.” That’s the reaction a lot of people are having to what they assume is a very similar role being portrayed by Ellen Barkin on the freshman sitcom The New Normal.

In a recent conference call interview, Ellen was quick to point out that there’s a lot more to her character than meets the eye. True, Joan Forrest is a very vocal, uber-conservative just like Archie was. But “Glee’s” Ryan Murphy and his co-creator Allison Adler have shaped a much more intelligent and educated supporter of all things right wing.

Being a non-apologetic liberal, Ellen wasn’t sure how to approach the job. She recalled, “This character was unlike me in her politics. And so I thought, ‘Wow, I’m going to have an enormous amount of work to do.’ But quite frankly, I just flipped me and I found it all inside me — her passion, her commitment, her incredible outspokenness and sometimes inappropriate outspokenness.”

Ellen soon realized that this might be one undeniable similarity she shared with Joan. She admitted, “I can be in appropriate. I’m overly opinionated. I, on occasion, talk first and think later and I realize, ‘Oh God, should I have really said that? And so, I have a very strong connection to this character on a human level, and politically I just flip her?”

Still Ellen is rooting for Joan to learn a very important lesson on the show about a woman who becomes a surrogate for a gay couple. She conceded, “What she will hopefully learn is that her idea of normal no more applies to her family than it does to a same sex family. She is a 58-year old great-grandmother, which means that for three generations women have had babies between the ages of 15 and 16. And  there are a lot of people in the world that do not consider that normal either.”

Ellen and Joan may speak out of school from time to time, and both might have their lessons to learn. But Ellen is clearly someone who cares deeply about the topics that matter to her and thirsts for new experiences.

For related stories check out:
In Honor of "Parenthood:" Our Favorite Craig T. Nelson Role