Our Archive Interview with Chuck Lorre 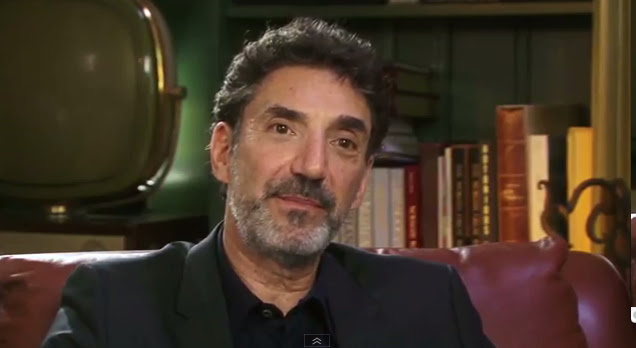 Courtesy of the Archive of American Television

A few months back we had the honor of interviewing Chuck Lorre on behalf of the Archive of American Television. Sitting face to face for almost four hours with the creator of Two and a Half Men, Mike & Molly and The Big Bang Theory was at once intimidating and exhilarating. Here is one of the most prolific names in television chatting with us about his entire career — from his days as a wanna be rock star to his rise to Executive Producer of three of TV's top rated shows. His reputation proceeded him, which made the interview that much more nerve-racking, but we found Chuck to be charming, straightforward and an enthralling storyteller. The whole interview is on the Archive's website if you want to see more, but here are our favorite moments.

On Getting into the Business
Before he was a writer/producer Chuck was a struggling musician. He described his existence joking, "I think the word is poor." He had a two-year-old son and a baby on the way and played nightclubs and bar mitzvahs to make a living. During the day he'd do cold call sales pitching random products door-to-door. Here's the story of his serendipitous stop at the office of DIC comics that kickstarted his career as a writer.

On Writing His Famous Vanity Cards
At the end of every Chuck Lorre production after the credits roll, there is always a Vanity Card with Chuck's thought for the moment. When we asked why he started doing them he replied, "If there's a second of airtime that can entertain the audience, why wouldn't you use it?" He talks about the cards and at the end of the clip mentions a few he regrets writing.

On Casting Jon Cryer in Two and a Half Men
When he created Two and a Half Men, he knew Charlie Sheen would play the lead, but when it came time to cast the brother on the show, he sat with network executives who said, "Let's talk about who's going to pay Charlie's brother and let's not EVER hear the words Jon Cryer." Apparently before Men, Jon had been in a string of failed pilots and the suits were a little gun shy. Here's how Chuck changed their minds.

On Replacing Charlie Sheen on Two and a Half Men
One of the low points of Chuck's career, was the scandal surrounding Charlie Sheen and his departure from Men. He said he though the show would just end at that point. But he began thinking about replacing Charlie with Hugh Grant. He tells the story of how he ended up hiring Ashton Kutcher instead.

On Creating The Big Bang Theory
When Chuck talked about the beginnings of The Big Bang Theory, he called it "A Beautiful Mind without the paranoid schizophrenia that took away some of the comedy of it." Hear how the show started.


On the Red Carpet with the Cast of Breaking Bad