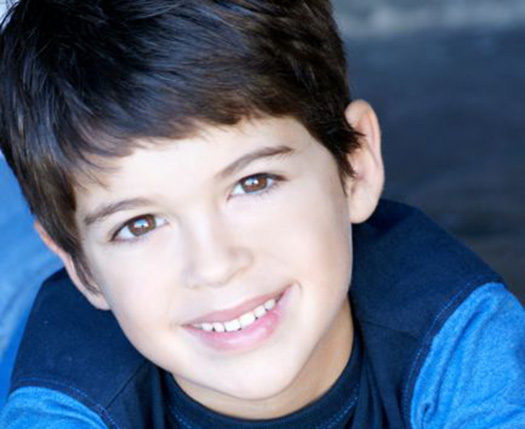 At the age of ten Joshua Rush is practically a veteran in the business and has wisdom beyond his years. He started acting in his mom's corporate videos at the age of four. In a recent exclusive interview he stated, "I've always just been a ham. I've loved being in front of the camera. It feels like home to me."

Since his first professional TV appearance in Private Practice in 2009, Joshua has appeared in Criminal Minds, Heroes, Chuck and CSI: NY. And he's lent his voice to Family Guy and Gravity Falls. But this holiday season he leaps to the big screen alongside some pretty big Hollywood names. In Parental Guidance, opening December 25, he plays the grandson of Bette Midler and Billy Crystal and the son of Marisa Tomei. When he's not acting, he's a self-proclaimed nerd. He loves playing with computers and even provided some tech support for Ms. Midler on set. We spoke with Joshua about his co-stars, his influences and what he'd be if he weren't an actor.

On His Acting Influences
"My parents, my mom and my dad, my teachers. Everyone around me is an influence to me because you can learn a little nugget from everyone."

On What He'd Do Other Than Acting
"I'm a complete nerd. I'm an official geek because I have a PC in the house along with my Mac and iPad and all that. I just love science and technology. I love STEM — science, technology, engineering and math. It's just a passion for me. I would be a nano technologist if acting didn't work out for me."

On Describing a Nano Technologist
"A nano technologist basically creates robots that enter the bloodstream or go inside of bacteria — very, very small things that help us understand life."

On Playing with Mac Coding Software Terminal
"I love messing with terminal. I go on line and I search for weird things you can do to your Mac in terminal. I wouldn't recommend doing it because it can completely mess up your Mac. It's bad. Just little things like you can change black into white, turn things to orange, invert the colors. Just can just change little things. It's a lot of fun though, but you can also completely mess up your computer."

On Advice for Kids Being Bullied
"If you're being bullied, don't let it affect you. Because you, at your heart, is who you really are. So it doesn't matter what other people think of you."

On What He's Most Passionate About
"I would say I'm most passionate about science and technology. I'm a really big Apple guy but I just looked at Windows 8 and it's good. I'm in between in. I don't want to become a PC, but I don't know."

On Which Pop Culture Icon He'd Be for One Day
"Probably Genghis Khan. To rule most of Asia and Europe that would be pretty awesome. If I could be Genghis Khan right before the downfall of his empire so I ruled most of the world, basically, that would be cool."