Made in Chelsea's Spencer Matthews Talks About the Show 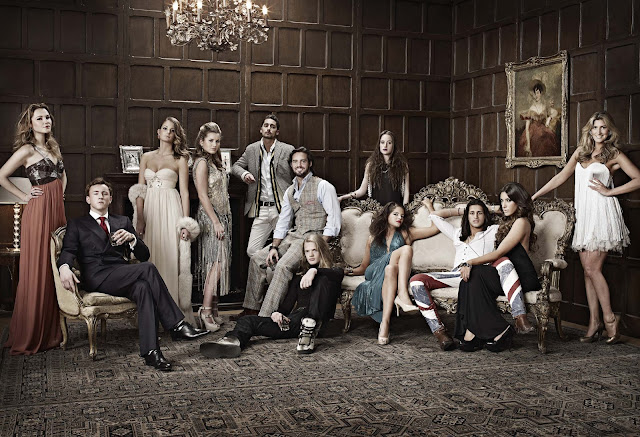 Americans have had a fascination with the British pop culture since the Beatles. We just can't get enough of the royal weddings, the boy bands, the Shakespearean actors and the socialites. Which is why the arrival of Made in Chelsea, the hit reality series in the U.K., has Brit gawkers buzzing. The show follows a group of eight socialites who hail from some of the most posh areas of London. We'll follow them to elite polo fields, hip nightclubs, chic parties and so much more. Now you can eavesdrop on what its like to be rich, beautiful and carefree every Monday night on the Style network.

One of the central figures of Season 1 of Made in Chelsea (the series is in Season 4 in the U.K.) is Spencer Matthews. The nightclub PR manager-turned-stockbroker spends most of his time pining away for his childhood sweetheart Caggie while dating a series of other girls. The heir to the Eden Rock Hotel fortune speaks fluent French (he spent most of his childhood on St. Barts), went to the same school as Margaret Thatcher (though clearly not in the same graduating class) and has ties to the royals (his brother is rumored to be dating Pippa Middleton). Are you getting a clearer picture of the kind of social circles a viewer can see while watching Made in Chelsea? And as an added bonus, in between seasons of Made in Chelsea, Spencer took a go at being the British Bachelor during that show's fifth season.

In a recent exclusive interview, Spencer talked about why he signed up for the show, how it's changed his life and being the U.K. Bachelor.

On Why He Signed Up for a Reality Show
"I'm not a particularly private person by nature so I knew that it would play on my mind. And I've always been fascinated by cameras, film, theater, anything to do with production. And I thought it would be a nice opportunity to experiment with some of the elements of media that I studied at USC. It's also a nice opportunity to work with some of your best friends, which we get the opportunity to do and just have a good time. I was fairly young at 24 and I thought I could get away with it. [My employer] was kind enough to say, 'If you want to give your media career a crack and it doesn't go so well, then we'll take you back.' So it was kind of win-win for me."

On Describing Chelsea
"Affluent. Young. Trendy, Carefree. It's an interesting part of London. It's very different from the rest of London. You know you're in Chelsea when you're in Chelsea. It's the place to be, no doubt, for our age group in particular, as hopefully the show will portray."

On What Americans Will Like About the Show
"I have no idea if it's going to be popular or not. I really hope so. The reason I did it, given the current economic climate or especially two years ago, it seemed a particularly distasteful thing to do at the time. And I actually wasn't expecting it to be popular within the U.K. at all. I had my sights set on the U.S. before the show. I wanted it to go to the States and hopefully, given that Britain has become quite trendy, given the royal wedding, American have always enjoyed the actors, the performers. I think it might be a particularly interesting, insightful look into some normal yet posh people within the U.K."


On If the Show Has Changed Him
"No absolutely not. It has changed some of the people — some for better, some for worse — but I don't feel as if I've changed at all. My day-to-day life has obviously changed. I'm not at [London-based brokerage firm] iCap anymore, for example. [Made in Chelsea has] become a full-time job. I think we're in 26 countries now. It blew out of proportion a lot quicker than I thought it ever would. Obviously I'm busy in a different way now. I've always been a hard worker. I've always had a lot on my plate, but it's different now obviously given the nature of my career change."

On Being the UK Bachelor
"It was pretty fun. Looking back on it, I met some pretty interesting people. [I] made some close friends. I made friends with quite a few of the lads behind the cameras. It was quite a long production. It was nine weeks away. Obviously one can't complain. My biggest concern was living up to the girls' expectations because you're painted to be the ideal man and I'm not sure I'm that. So I felt like I had a lot to live up to. It was just interesting. Twenty-four birds getting out of the car and they're supposed to all want your attention. And what if they don't want your attention? It made me think a differently about the whole dating scene. I've never dated 24 girls at the same time."

Watch Spencer on Made in Chelsea Monday nights at 11 p.m. EST/10 p.m. Central on Style Network.