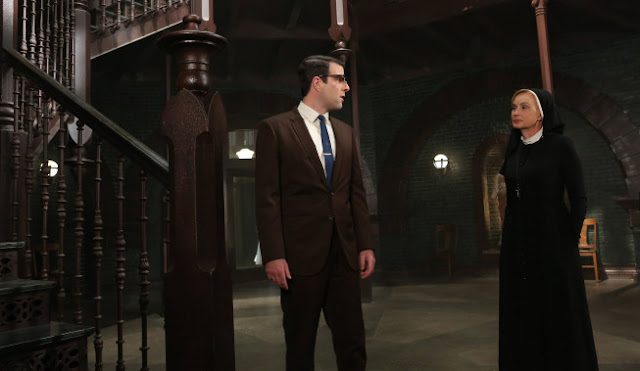 How is it possible that American Horror Story just keeps getting better and better. We admit we were a little unsure this season if the over the top gore could captivate us the way the mystical ghosts of Season 1 had. But once it was revealed that Zacahry Quinto’s Dr. Thredson was Bloody Face, we were hooked. And like the show, the conference call interview with Zachary Quinto a few weeks ago was just too good to put down. So we made it a two-parter. Here’s what Zachary had to say about his AHS:Asylum cast mates, Season 3 and what makes a good horror story.

On His American Horror Story Cast Mates
“Evan [Peters] is fantastic… I really love what Lily [Rabe] is doing, now that she’s got the devil inside. I think that’s just delicious… She’s doing such great stuff with that. That’s really fun for me to watch. And I can’t take my eyes off Jessica Lange. I just think she’s so committed to just her ferocity of instinct. It’s so riveting and inspiring at the same time. So I love working with these people. I wish I had more to do with James Cromwell. I have never really crossed paths like the doctor in the asylum, but maybe there’s something to look forward to there. We’ll have to wait and see.

On Being Friends with Sarah Paulson
“There’s less awkwardness to cut through… It strengthens the connection that the characters share, whether it’s friendship or torture or hostage, whatever it may be… I love going to work anyway, no matter who I’m working with, but in particular with Sarah… She’s doing such wonderful work on the show that I also just love watching her character and the journey that she’s taking. She’s gone to so many extreme and challenging emotional places, and done it so beautifully and dynamically. I just think her work is so incredible, so it’s been a joy for me, really, this whole experience.”

On Coming Back for Season 3 if Asked
“I just read today that the show got picked up for a third installment, so that’s very exciting. I’m so glad it’s doing well and people are really responding to it and FX has been really great and so supportive and, I think, innovative in the stuff that they’re doing. So it’s great to work there and be a part of it. I haven’t had any conversations with Ryan about what he’s thinking for the third season, so I have no idea. I love my job and I love the people that I do it with and I always want that to be the case. So I know he has plans and if they involve me, I’m sure I’ll have a call at some point. But I don’t know anything about it. I’m just focused on getting through the rest of this season and moving onto the next phase of stuff that I have lined up.”

On What Makes a Good Horror Story
“Stories that reflect societal fear back at the audience on some level, on some visceral level, is the most compelling kind of horror. That’s what this show is doing in a lot of ways… Tackling issues that have relevance to our modern society through another point of view, or another time period, filtered through different perspectives and really getting to the root of what drives us as a society, as a culture, as an audience. That can be really scary and that’s what’s really happening in a lot of ways with the characters that we’re all playing this year, and the scenarios in which they find themselves.”

On Doing an Installment Series Vs. a Movie or Long-Term Show
“It is creatively more engaging because if you are going back to the show for another installment, then you’re definitely going to be playing a completely different character than the one you just played. So there’s no sense of stagnancy or fatigue because you’re constantly recreating and reinvesting in the character."

"Then from just a business standpoint, or in terms with the challenge with television, sometimes getting what you can get. In success, you can get into a situation where you are obligated contractually to a show for years at a time — sometimes six, seven years if the show is enormously successful. And that can be outrageously beneficial and satisfying. It can also be really frustrating, I imagine. I spent four years on one show and there were its own set of challenges with that, but that’s the other cool thing about it is, there is no stuck because there’s always a finite amount of episodes. So I think it’s structured really beneficially and I think that’s why actors like James Cromwell and Joe Fiennes and Jessica [Lange] come to an experience like that. It’s attractive in a different way for somebody that’s used to doing features and used to having more flexibility with their schedules. We can come and do this and then still have that in other ways.