Our America with Lisa Ling Is a Learning Experience 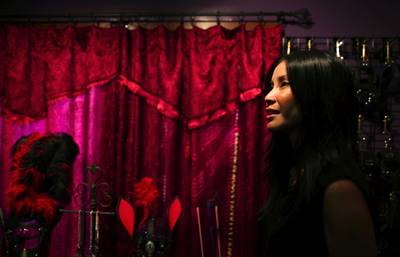 Photo courtesy of OWN: The Oprah Winfrey Network

Lisa Ling is back and we're very excited. It's hard to believe its already Season 4 of Our America, one of the flagship shows of the OWN network. Lisa and her crew allow us as viewers to peek inside the world of places we would never otherwise see and have a look around without judgment or sensationalism. From people who practice bondage to childhood obesity, Lisa explores the tough topics with a gentle and loving touch, and incredible sense of dignity and respect. At a recent press event she revealed some of the episodes this season and discussed what she hopes people will learn from each of them.

Lisa would like her viewers will take something away from each episode just as she has. "I'm proud of the fact that during every single episode of Our America you will learn something. There's take away value to everything. I feel like I've become a better person as a result because I'm more understanding and open-minded. And my hope is that people who are watching this will do that as well."

While most people, like Lisa herself, assume people who practice bondage are freaks, this season Our America explores the subculture. With the success of Fifty Shades of Grey, Lisa couldn’t help but wonder who these people were who were indulging is this behavior. What she found out was they are just normal people, lawyers, doctors, your neighbors and co-workers. Lisa stated, "There are things that all of us probably wouldn't want to share with the rest of the world or there are things about us that we think other people would judge us on. And our whole purpose is to try and allow people to watch our shows without judgment so that they might have a better understanding of how people live."

Lisa opened up her own life to the camera when she featured her dad, Doug, in the episode about seniors. She said, "The intention of this show is to give a people a sense of how different people are dealing with aging because it will inevitably happen with us and already so many of us are trying to figure out how to deal with our own aging parents. And I'm just so grateful that OWN has allowed me to do this because this is the show that I've been so, so excited to do."


In another episode Lisa explores one of the more than 3500 new religions that have sprouted up across the country in recent years. She stated, "We get that sense that people these days are really struggling and they're really hungry for purpose and meaning and there are a lot of broken souls out there." She continued, "It was fascinating on the level that to see how people who are so broken… feel so drawn to these spiritual practices or one charismatic leader. To watch that process and how easily people can be influenced by these 'religious' practices is really interesting… These are people who say that the apocalypse is around the corner and they are willing to die for Christ."

Lisa also follows the lives of two adult men who were abused as children and how it had affected their lives. She divulged, "Our hope with this show is that parents will get a sense of what to look for in their own kids or least have the conversation about people who you can trust. I've never seen a show about this topic like the one that we've down and so I'm really proud of this one."

In "Families of Killers" Lisa sits with parents and relatives of people who have committed unspeakable crimes. She interviews the brother of the Unabomber and coincidentally is in the home of a man whose son shot up a school just as the events of the Newtown tragedy are occurring. She recalled, "I was in his house about to start the interview when we got the news and we incorporated that into the story because for him it was like he could actually recount what happened to him and you could easily see that happening with the father of Adam Lansa when Newtown happened."

Lisa knows it's difficult to sometimes have pity on these people but she said, "We spend time with the families of people and try and better understand the kinds of things that they've gone through… Imagine that grief and that pain of showing up at a school looking for your kid only to find out your kid is the killer." She once again goes in without judgment to hear their side of the story.

In the last episode of the season, Lisa explores the topic of polyamory — the practice of having numerous simultaneous loving relationships. Lisa revealed, "This show, of all of the shows on alternative lifestyles, has provoked the most conversation amongst my friends. Because when you really think about it, it really goes into whether monogamy is realistic for people. Certainly there are people who are in really happy, monogamous relationships, but there's a reason why our divorce rate is as high as it is." She continued, "With this show what was interesting to me is the notion of can one single person fulfill all of your needs? If we're really going to dig deep inside of us most of us would probably say, 'No it's impossible.'"

Ling encourages viewers to watch with an open mind and says, "Every show has been a different kind of experience but each one goes really, really deep… I'm really excited about this season."

Tune into the premiere of Our America with Lisa Ling tonight at 10 p.m. EST/9 p.m. Central on OWN.

For related stories check out:
Lisa Ling's Passion for Journalism Shines on Our America
Go Out and See Our America with Lisa Ling