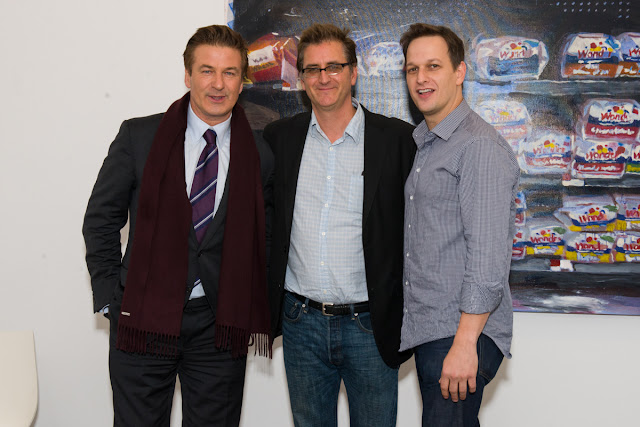 Born in New York and raised in Georgia, artist Brendan O’Connell had to travel all the way to Paris to find his inner talent. While in the City of Lights writing a novel about painters, he decided to teach himself to draw to better understand one of his characters. Brendan instantly realized that he had found his bliss.

Within a couple of years he was doing caricatures on the street outside Notre Dame and not long after he was making a living as an artist. Upon returning to the U.S., Brendan found inspiration in the most unusual place — Walmart. There, he would sneak photos of commonplace items and people performing their mundane errands and turn them into vibrant masterpieces.

His titles read like a grocery list including “Blond with Yams,” “Fiber and Ketchup,” “Cheerios,” “Fritos” and “Pine Sol.” But his work has captured the attention of the art world.


Among his supporters is David Moos, the former Curator of Contemporary Art at AGO in Toronto. As Brendan recalled, “He came to my barn in Connecticut, which was probably the most significant thing that had happened to my art career. And he wandered through and he said, ‘Your Walmart is your very big idea and you need to go from the guy who gets thrown out of Walmart for taking pictures to the guy who is embraced and given free reign to explore his path.’”

David’s prophecy came true. A few years later, as Brendan recounted, “Walmart called me and they were like, ‘We actually like what you do. We’d like to give you permission.’”

And now David is influencing Brendan’s art again. As he explained, “He’s called me twice, saying, ‘You have to go to North Dakota or Arkansas or some remote part of America and you actually have to set up in the corner of a Walmart and just paint everyday people. Just have them sit down and you paint their portraits.’”

Brendan intends to do just that. And his lucky subjects will have the opportunity to buy the onsite creations at bargain basement prices by art world standards. If they don’t scoop up the paintings, Brendan is sure someone will. “New York would essentially become a secondary market. But he said the amazing thing the way the art world is covetous of stuff and life, you’ll have Rubell chartering his private plane to go to North Dakota so he can get it for 80 bucks instead of for $20,000.”

Before that happens, Brendan is turning to the common man for help by asking his fans to pitch in and send him photos for his Everyday Walart offshoot. As he explained, “My last two favorite paintings came from photos that people sent me as opposed to ones I took, which I love that because I’ve been in more Walmarts than anybody I know who doesn’t work for the company. So you start to get a familiarity blindness where if somebody goes in and just thinks of it in an artful way, they’re going to come up with something more interesting just from the freshness of it.”

In addition to all that, Brendan founded the EveryArtist.me project whose mission to spark next generation creativity. His hope is to inspire kids to find their own voices and help solve society’s great challenges in the future. And along the way he might just help them find beauty in most unexpected places, just like he does everyday.

Visit Brendan O’Connell’s official website to learn more about the Walmart project. Find out how to upload your own photos for Brendan at the Everyday Walart Facebook Page. And go toeveryartist.me to get involved in sparking creativity in the next generation, by supporting EveryArtist.me's national art event this Fall.
Posted by Pop Culture Passionistas at 2:00 AM