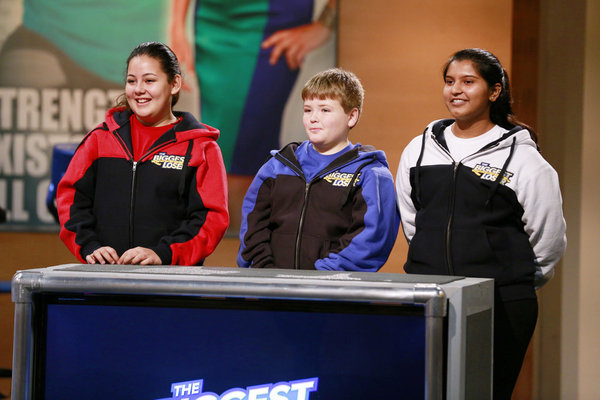 We warned you a few weeks ago that we could make The Biggest Loser our Inspirational Pop Culture Moment every week. And while we promise we won't be that predictable, we were truly inspired by this episode of the show.

As the episode began the remaining seven contestants were told that they could all win immunity this week if they collectively dropped at least 70 pounds. This is a tough challenge, indeed, considering they lost 61 at the last weigh in and they all had big numbers. So they were relieved to hear they may be able to lower that collective weight loss number. But the fate was in the hands of the kids who are part of this season's focus on childhood obesity.

Three kids — Sunny, Biingo and Lindsay — have been working remotely with Jillian, Bob and Dolvett to become more active, focus on healthy diet choices and get into better shape. This week it was time to test how far they have come to date and in doing so, possibly help their adult counterpart on the ranch. They have the chance to lower the total collective weight loss goal by ten pounds.

The challenge was two-fold — brains and brawn. In the brains part of the challenge the kids were asked to identify the lower calorie meal between two choices. They got four out of five right, lowering the total wight loss amount by four pounds, but more importantly showing that the message about healthy eating was getting throughout to them.

And then in the second part of the challenge, their physical fitness was put to the test. At the beginning of the season they were given a fitness test, which each of them did far below average on. Now they would be retested. If they improved over their last score the adults would get another pound off their total goal.

First up was Bingo, who crushed his original sit-up mark of 18 by doing 35 this time. He also did 32 push-ups, 9 more than the initial test. Lindsay was able to 79 chin-ups more than doubling her record of 37. She also was able to do the shuttle run in 32 seconds instead of 35. And in the most inspiring moment of the week, Sunny, who took 13 minutes to run a mile the first time, set herself a goal of doing it in 10. She crossed the finish line, accompanied by all of the players in the game, in 9 minutes and 59 seconds.

It brought tears to our eyes to see these kids, setting their goals and exceeding them. A true inspiration for all kids everywhere.