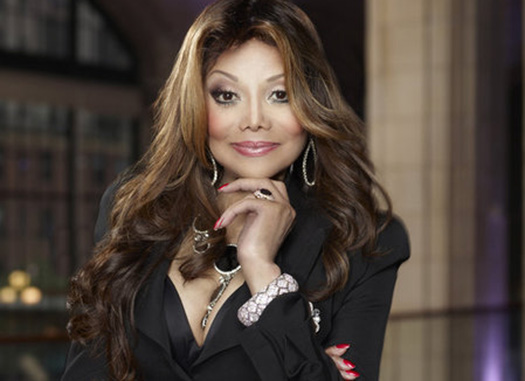 The last time La Toya Jackson was on Celebrity Apprentice, she made it pretty far. In Season 10 she earned of total of $65,000 for her charity, AIDS Project LA, but was pretty badly beaten down by bullies like NeNe Leakes and Star Jones. Now La Toya is back for the All-Stars season and she has something to prove. In a recent conference all interview she talked about her hesitation about returning, what she learned the first time and which star she was excited to meet.

On What She Learned from Her First Time on the Show
“It’s such a fascinating show and I love the fact that he has given us this opportunity to promote our networks and what we’re doing as far as our charities are concerned. But I think I learned that personalities are individuals and you have to really be strong and steadfast no matter what happens, what you go through, stand by what you truly believe in and don’t let anyone deviate and you go into that road of deviation… But it’s fascinating, it’s intriguing, it’s everything. I am so happy and so proud to be a part of this… I love what Mr. Trump offers to all of us… I learned this time you cannot really let your heart or emotions get too involved because if you do, this is business and you’ve got to keep it business and you can’t let your emotions or your heart be a part of it. And I think Donald is very, very good at that. He knows how to separate the two.”

On Having Any Hesitation About Going Back on the Show
“ I wanted to do it in the very beginning but the second time around I was a bit hesitant because I knew what I was faced with the first time. And I said, ‘You know what, you never give up, you always have to keep believing, you have to believe that you’re going to be the winner, you’re going to come through this really straightforward and strong.’ And I went for it. Because if I have learned anything, I have learned what Trump has taught us all that we need to put our best foot forward and don’t let anybody, anybody block us from anything that we wish to do or want to do. And I felt it was very, very important to bring awareness as well to my charity, which was National Network to End Domestic Violence. Because this show is so big and so wonderful, he has given us this opportunity to bring this awareness to our charities where everybody sees it and that interest goes there and then they start giving to the charity, which is incredible. And it’s wonderful all the people who need it.”

On Who She Thinks Is Her Biggest Competition
“In the beginning of the show I thought the biggest competitor would be probably Penn. I just felt that. I don’t know why but I did, of course, and Trace, of course. However, I felt that I would have a lot of problems with Omarosa and that was just a feeling. Because you can tell in the beginning when you see the people sizing you up and saying little things to you but you’re still polite to them at the same time you’re going, ‘Oh my God, it’s going to be war at some point.’ And you know it’s going to happen, you know it’s going to come. And yes of course it’s going to be an interesting season, let’s put it that way. And Bret was a threat because Bret, as we all know, Bret has already won, so at this point you’re thinking, ‘Oh no, Bret’s here, what are we going to do?’ So yes, it’s very competitive. And that’s one thing that you have to really, really mentally get yourself prepared for because people will do anything, and I do mean anything, to win.”


On Her Charity
“I was playing for National Network to End Domestic Violence. As you all know domestic violence occurs all over the world and as we’re speaking now there are women, and of course men, that are just going through abuse at this very single moment. And they have no shelter, they feel that they have no lobby, they have nowhere to go. So I’m here to let them know that we are doing something about it and there are shelters, there is an 800 number that’s right there for you to call and get help. But this year, this charity that I’m playing for, National Network to End Domestic Violence, was actually formed by the people themselves. So they went out and they got together and said we need a charity, we need a place to stay, something to do and have people come and donate for us. So I thought that was very commendable of these little kids and women who were basically really suffering to get together and do something and say this is what our charity is going to be about and this is what it is. And it needs awareness. And people are just watching and just donating and I’m so happy. You can never, ever, ever have enough. And I truly believe that no one charity is better than the other but just bringing awareness to it is what I’m here for and I am very proud and pleased to be happy working with Mr. Trump to bring that awareness to it.

On Which Celebrity She Was Most Excited to Meet
“I have to say that I was really, really thrilled and I do mean thrilled [to meet] Bret [Michaels] because he’s a big rock star. And I thought he had already won and he’s wonderful and I just could not wait to meet him. And I never really expressed that to him because once you get there you get in work mode immediately because you know that competition is there. But I was truly looking forward to meeting him and he’s such a wonderful person. And I will always, always adore Bret as well as Penn Jillette who is such a sweetheart.”