Sasha Roiz and Bitsie Tulloch Talk About Grimm After Dark 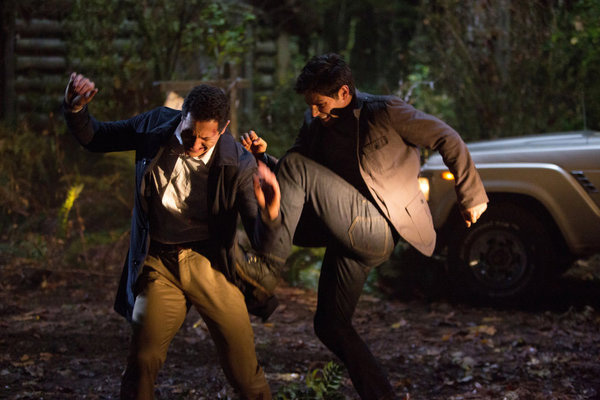 After what seemed like an eternal wait, the mid-season premiere of Grimm aired last week delivering an action packed hour of TV. We doubt any fans of the show were disappointed. Some loose ends were tied up as others unraveled completely. In a recent conference call interview, we talked to Sasha Roiz (Captain Sean Renard) and Bitsie Tulloch (Juliette Silverton) about their explosive love scene, Adalind’s manipulation, Nick’s confrontation and what happens next.

When we last saw Grimm Nick Burkhardt (played by David Giuntoli) he had just found out that his fiancé (Juliette) was having an affair with his boss (Renard). And though he had yet to discover the mythical reasons behind the attraction, he was mad as hell. This episode starts with him going off to confront the lovers only to be interrupted mid-route to investigate four murders, that he was responsible for committing… oops.

In the meantime, the Captain and Juliette engaged in a passionate love/hate scene. The scene required a stunt coordinator and eight hours to shoot, but the actors were thrilled to be taking the show to a new level. Bitsie explained, “We’ve not see the likes of [this] on Grimm so far. It’s a great way to deal with what’s going on between the two of them and also to highlight how little control they have over it. This is not some slow burning love like they literally can’t control the lust. And obviously it gets to a violent place and neither them is really wanting this to happen, they can’t help it. Obviously Sasha’s character understands more of what’s going on coming from that world and Juliette is just like all right, well, I guess par for the course, I’m already losing my mind.”


And then Sasha has the chance to be racy again, when immediately after almost being intimate with or killed by Juliette, he goes off to an encounter with Adalind. He talked about their relationship. “It’s very antagonistic and she’s definitely a thorn in [the Captain’s] side and she’s out to thwart all of his plans. She’s also incredibly conniving and manipulative just the same as Renard is. So she knows how to play him. What I love about some of the writing is you really don’t know who’s playing who sometimes. There’s always a turn of the tables and so it will be interesting to see what transpires. But she certainly has presented herself at a very difficult time for him. He’s very vulnerable at this point and so she’s found a weakness and her timing couldn’t be better.”

And while Renard is off being manipulated by Adalind, Nick is piecing together just where his boss fits into this mythical world, and how he managed to steal his girl away, not mention the all important “key.” He goes off to confront him in the woods. Sasha commented, “I was actually surprised it’s as soon as it is. I thought it could even be dragged out until the end of the season. But I’m really glad that we had a chance to finally confront each other because I think it’s something the fans had been waiting for for a long time. And as characters and actors had been waiting for as well. So I don’t think it’s a moment too soon.”

He may have walked away pretty unscathed from his fight scene with Bitsie but his altercation with David was a different story. He revealed, “It was 2 o’clock in the woods on a Friday. We were just exhausted from the week and we’re doing our best for this really long fight sequence where there were some stunt men, in fact, because there were some things you can’t do… We did end up hurting each other, David and I. But that’s par for the course. It’s fun to do it and it’s just challenging.”

By the end of the scene in the woods, the two men realized that although they were coming at it from different sides, that in the end they probably need each other. And so they set off to break the spell.

So what happens next? Sasha said, “It’s really Nick’s choice at this point whether he wants to move ahead.”

For related stories check out:
An Interview with the Executive Producers of Grimm
Jennifer Morrison Talks About Once Upon a Time