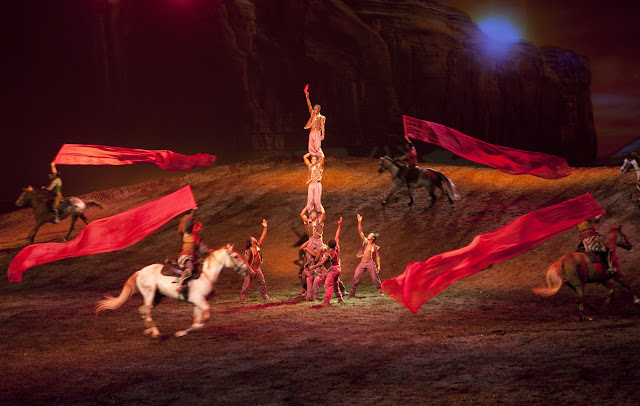 He may be best known as Captain Kirk, leader of the Starship Enterprise, and Denny Crane, a lawyer from Boston Legal, but William Shatner is also a man with a big heart. This week we had the pleasure of attending Cavalia's Odysseo, a horse spectacular by the creators of Cirque du Soleil. Shatner, a life-long and well-known horse lover, shows and breeds equine at his farm in Kentucky and rides competitively with Saddlehorses and American Saddlebreds nationwide.

He came to the big tent in Burbank, California, to not only see the spectacle but also to share it with others. Before the show, Artistic Director Normand Latourelle, presented Shatner with a check equal to the amount of 1,000 tickets to Odysseo, so Shatner can pass those out to his charities. In all, ten organizations will get 100 tickets to Odysseo.

Shatner talked about his organization, the Hollywood Charity Horse Show, that also does a performance every year in April. He stated, "For about 30 years now, we've raised several million dollars for local children's charities." This year they have teamed with Cavalia to raise funds and bring these kids to see the magical performance.

Shatner also works with All Glory Project, which deals with veterans coming back from war. She noted, "It just so happens that veterans, and their physical and emotional needs, are some of the same as children who have emotional and physical needs. A lot of the charities that we devote money to are therapeutic riding charities." And so the vets will also benefit from Shatner's generosity.

We sat next to a woman from LA's Children Hospital, a recipient of funds from Shatner's charity and now she has been given 100 tickets to bring sick kids and their families to escape from their stressful lives for an afternoon of wonder.

After the check was presented, the curtain rose and the show began. It was as awe-inspiring and breathtaking as we had hoped (more on that later). When it was over Shatner tweeted, "What an amazing show this afternoon at #OdysseoLA Media Preview. This show is a hit. Thank you for such a treat! My best, Bill."