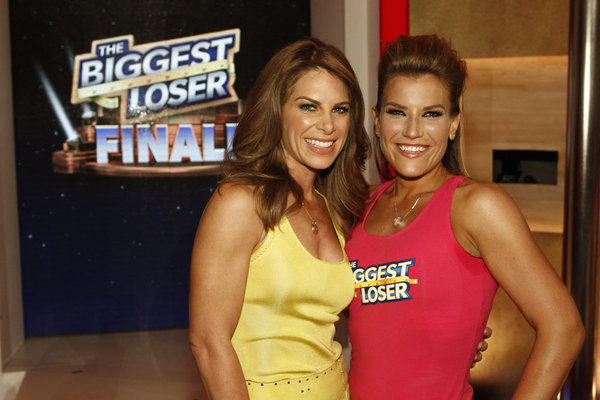 Tuesday night Danni Allen won the title of The Biggest Loser by losing 121 lbs. After ten weeks on the ranch and an emotional fight to overcome her demons, Danni was victorious, beating out runner-up Jeff Nichols by just one pound. We talked to Danni in a recent conference call about her journey on the ranch and what she learned through the process.

Initially Danni was part of Jillian Michael’s White Team, which one-by-one was eliminated right from the start, leaving her as the sole surviving member by the fifth week. She recalled, “I was all by myself crying in my bed because I had no more team. I was all by myself, I didn’t know what I was going to do. I didn’t think I was going to make one more week.” She said she never dreamed that she’d “be standing at the top with the confetti falling down and the giant check for $250,000... But the best thing was that week I did learn that it was up to me to change things, it’s in my hands to change my stars. And I was able to do it, and I think that’s the best story for everyone out there, and we’re challenging America. If I can do it, you totally can do it.”

Danni said that losing all her team members early on and being forced to stand alone was the best thing that could have happened to her. She noted, “It forced me to confront myself. I was the girl that had the disease to please. I was always worrying about everyone else and not worrying enough about myself. Well when my team left, I had no one else to worry about but myself, and I was finally able to put into perspective that you have to help yourself before you can help anyone else.”


Right from the beginning Jillian asked her the hard questions that helped her come to terms with why she had become so heavy and what was holding her back from taking off the weight. Danni said, “She asked those questions that no one would ever ask me before, because she knew I didn’t ask them myself and I hid them in a corner. So being able to confront those hard questions and those demons, and let them out and expose them gave me the tools to fight them. Some of them have been cured. Some of them I’m going to fight for the rest of my life, but at least now I know I have the tools to keep that going… awareness is the best gift that I got.”

She explained that her biggest demon was the feeling of not being worthy of deserving. But on the ranch she realized, “Being me is enough to deserve anything, and as long as you’re a good person and you can do what you can to pay it forward, that’s enough. And I just had to realize, you are enough. And you can be more. So once I got over that feeling of undeservedness, and just always felt the ‘why me?’ I kept saying, why did I get this? Why was I lucky enough to have this? And you know what? Why not me? And why can’t I go for that one in a million opportunity? There’s one, right? At least there’s a chance. You can’t get something if you don’t try, and so the ‘why me’ turned into the ‘why not me’?”

She credits much of her progress t the support of Jillian. And since much of their time on the ranch was one-on-one, they formed a very tight bond. Danni stated, “She was there for me 100%. Yes, she was my trainer. She was there for the physical part, but she was also my therapist. She was there to really help work on me mentally, because she knew we couldn’t get anywhere without fixing what was behind the scenes and what had been guarded. And once we got that process, it became a great bonding moment.”

She continued, “Jillian Michaels seems like this hard, rough exterior, but she is a beautiful person inside and out, and when she shared and exposed her stories, that made me feel comfortable to really open myself up, and we both exposed ourselves to each other. And with that I think developed a bond, and a trust for each other that we knew that if we just confided and trust in each other, we can do amazing things and miracles would happen. Truly for the first time, she helped me learn what it was like to dream again, and I will be truly and eternally grateful for that. She is one of the best people I have been able to surround myself by.”

The Biggest Loser will soon start casting for Season 15. Do you wanto go on the ranch? Find out more at http://thebiggestlosercasting.com/.