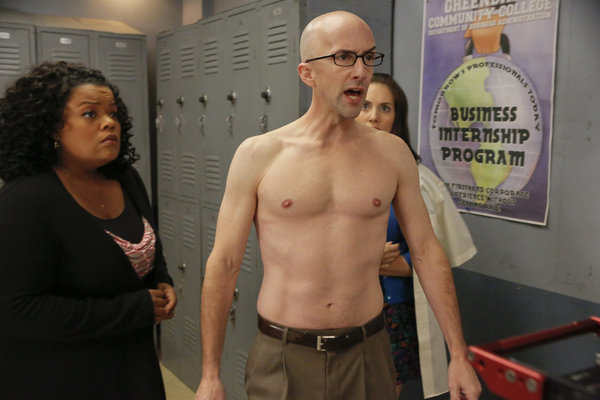 We all know and love him as the well-intentioned but floundering Dean Pelton on the NBC show Community. What some people may not know is that Jim Rash is also an Academy Award winning writer. He Nat Faxon penned the script for the 2011 feature film The Descendants. They also have a new movie coming out this summer called The Way, Way Back. So it is only fitting that Community tapped into his talent to write an episode of the show. His episode, “Basic Human Anatomy” airs this Thursday, April 25. In it, Annie and Shirley try to take down the school valedictorian and Abed and Troy swap bodies a la Freaky Friday. In a recent conference call he talked about how the script came about, which character is the most fun to write for and writing for himself.

On How Writing the Episode Came About
“The discussion to possibly write was actually before this season. It came up in talks during our hiatus. They just were curious if I had any interest. And I absolutely did if it worked out and there was a slot... So they end up having this open area where they were looking for another episode. And I went up and ended up pitching a couple of different ideas and then we obviously landed on the one that we did.”

On Being at the Table Read for His Script
“I mean it's weird because whenever you're at a table read… you're trying to also be an actor at the same time that you're listening to the script and trying to do both at the same time. It was such a dream come true to be able to write on a show that obviously I've been a part of but more importantly have been a fan of [creator] Dan [Harmon's] vision, a fan of our writers from beginning to end, jealous of our writers from beginning to end and of how their brains have worked and guided Dan's initial vision and what the show has evolved from year to year. So all those things that was like a scary challenge to be able to have the opportunity but also not want to let the show down by any means. And then from table read to getting to shoot and working with our director at the time Beth McCarthy-Miller and sitting side by side with her. And she was so giving as a director to allow me to chime in and then also such a great guide for the script that had a lot of heart in it. An important thing Community has always done is balance the absurd and fun with real emotion for the characters and what they're going through. So it really was a dream come true.”


On Which Character Is the Most Fun to Write
“It's always fun to write Jeff Winger's stuff. Because he pretty much just hates everything. And he's a great person just to shut people down. So he's a great character to write for the pace of scenes, because he's usually the person who's moving it along. But in this particular episode I just had so much fun, because I knew that Donald was going to be playing Abed. It was fun just to write what Abed's thought process is in understanding what's happening or how Abed would process all these things. So it was a challenge to write his brain and then subsequently obviously to write Troyisms is fun as well… The style of this particular episode it was more of getting into Troy and Abed's brains and then having this conundrum to figure out for the actors who's in which body.”

On Writing Dialogue for His Own Character
“It was fun… I've written pilots with my writing partner Natt Faxon. And we've developed shows that were for ourselves that didn't go past a pilot script phase. So it's certainly always been a dream to write for myself, for my voice. And although the Dean is a character that is not like me or probably what we were writing when we were writing for our voices, it's obviously something that I have in four years incorporated a lot of my own mannerisms and stuff like that, which I think is inherent with anybody who takes on a part for that long. So I think there's something that’s fun to get a chance to write for yourself and do some things that you love to do or that you find that's your point of view and what you find funny. And so with the Dean, even though I know him based on Dan's guidance and creation, I still understand that and enjoy writing his voice.”

On What Makes for a Great Episode of Community
“My favorite episodes of Community are the ones that really do balance something that's in a way heightened and absurd. It's Community's version of what can happen. And Dan's created a world where these things can happen. Where we can have these paintball episodes. And we can go to quote unquote space in our own real context. But yet there is always a way of moving the character forward. There was always a nugget that gave us some insight into one of them or pushed an emotional journey for them forward.

"This device of Freaky Friday allowed an opportunity to explore a friendship even deeper, because I think one of the many great relationships that have been created over the four years are that of Troy and Abed. And then you also have this sped along relationship between Troy and Britta… And both of them are in interesting places. And all these characters are. What Community's done well is see that while they love each other they're each trying to figure out what their next chapter is. For Troy specifically to have this moment of acknowledging that he's probably not ready for this but that he loves her so much and all of them so much. It's a great way to do something insane and weird and a choice he makes. Yet understand why he made that choice and get to write the heartfelt understanding of who Troy is. And who Jeff is for understanding that and who Britta is for understanding that and for Abed for being a friend who commits to the point of almost inadvertently helping just based on the idea that he knew that he was supposed to do something he just didn't know what it was."

For related stories check out:
Alison Brie and Danny Pudi Talk About Changes on Community
An Interview with Jim Rash from Community