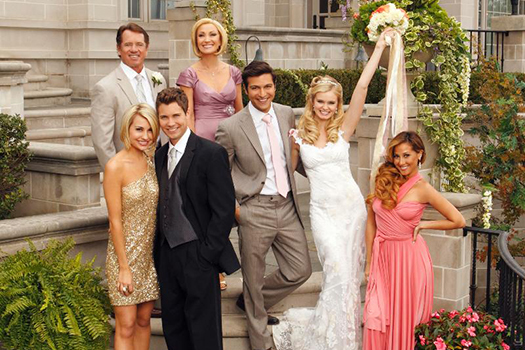 The plot of ABC Family's new original movie Lovestruck: The Musical, which premieres on April 21, sounds like a combination of Dallas meets Back to the Future.

Mirabella (Sara Paxton) is a  Broadway singer and dancer who quits show biz to get married. Her mom, Harper (Jane Seymour), a former dancer turned choreographer, gets angry when her daughter, the star of her next big Broadway show, quits and runs off to Italy to marry a womanizer (Alexander DiPersia). When Harper arrives at the wedding site, she swigs a strange potion and is transformed to her former self from 30 years ago (Chelsea Kane). Harper's ex (Tom Wopat) also drinks the potion and he, too, turns back the clock (Drew Seeley) and the two work together to mend the ill-fated mother-daughter relationship.

In a recent one-on-one interview we spoke with Sara about making the film and some of the pop hits she sang on screen. Her resume does not include a lot of singing or dancing, but she did grow up performing in musicals and is a big fan of movie musicals. Although she took tap and ballet as a kid and considers herself more of a singer than a dancer. She said, "We had this amazing choreographer, Michael Rooney and he made me look like a professional dancer."

As for the songs Sara explained, "Every generation will get something out of this movie because there's Madonna 'Like a Virgin.' And there's an Usher song and Lady Gaga." Sara sings "Like a Virgin" and also the big "Everlasting Love" grand finale. Plus she sends several of the original song penned specifically for the movie.

The actress said she can relate to Mirabella's rebellion against her mom, because she went through that herself, trying to establish her independence. But she differs from her character when it comes to the idea that you would have to give up your career for a man. She states, "I'm very career driven and it always comes first me… Maybe I just haven't met that person that makes me want to slow down."

We asked Sara our standard Passionistas question of who she would choose if she could be one pop culture icon for one day. She picked Britney Spears. She explained, "I grew up loving classic rock music — The Beatles, The Rolling Stones — and then one day I heard 'Baby One More Time' on the radio and I thought 'What it this?" I was eight and it changed my life. I loved her dancing. I taped, yes kids, I taped these special on HBO and I would rewind and replay them and try to do the dance moves. If I could just be in her body for one of the concert and try to do those dance moves I don't now what I would do."

Watch Sara pull off her own dance moves in Lovestruck: The Musical, premieres April 21 at 8 p.m. EST/7 p.m. Central on ABC Family.