The Best of the Upfronts to Date — Part 2 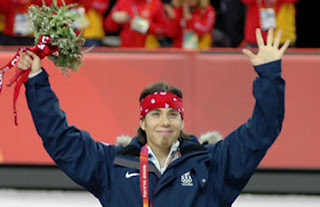 Photo by Noelle Neu via WikimediaCmmons

The Upfronts, the yearly event where networks pitch their upcoming seasons to ad buyers, continued this week with presentations by Discovery, Game Show Network SyFy and IFC. Here's our picks for what they have to offer.

GSN — Speed Skater Turned Game Show Host
We admit, we don't watch a lot of Game Show Network fare. But starting June 25, GSN is offering an intriguing option that we at least have to check out once to see. Olympic Gold Medal Speed Skater Apolo Anton Ohno is going to step up as hot of the new version of Minute to Win It. We love ourselves some Apolo, so we'll need to take a long, hard look at how he handles his new role.


SyFy — Jamie Foxx
Oscar-winner Jamie Foxx is bringing his talent — and his scary side— to Syfy. He will be writing, directing and producing a five-part mini-series that promises to be a mixture of Tales from the Crypt and The Twilight Zone and will explore themes of th seven delay sins, like envy and superficiality. Foxx promised he'd be signing on some big names and would probably make an appearance himself. Watch for it around Halloween.


Syfy — The Jim Henson Creature Shop
Syfy, home to one of our favorite reality competition series — Face Off — is developing another reality show that has us very excited. The Jim Henson Creature Shop will pit aspiring creature makers against one another for a chance to win an apprenticeship with the Creature Shop. Here's how they described it, "Teams of amateur creators will face off to build elaborate and awe-inspiring creatures, ranging from animatronic monsters and fantastical puppets, to life-like beasts and beyond!" And the judge? Brian Henson, Jim's son and chairman of the Henson franchise.

IFC — Giving Comedy Central a Run for Their Money
IFC is trying to capitalize on the recent success of indie comedies Portlandia and Comedy Bang Bang! with a few more new scripted series. One, which sounds intriguing to us is Comedy Timms Industrial Piping, a stop-motion animation with baby dolls playing the characters of 1980s soaps life Dynasty, voiced by Nick Kroll, Elizabeth Banks and more. Plus IFC has ordered the pilot Two Idiots, which is created and written by Megan Mullally and Tina Kapousis. You can't go wrong with Megan Mullally involved.

For related stories check out:
The Best of the Upfronts to Date
Face Off's McKenzie Westmore and Ve Neill on Past Contestants