Celebrity Siblings: The Swon Brothers Talk About The Voice 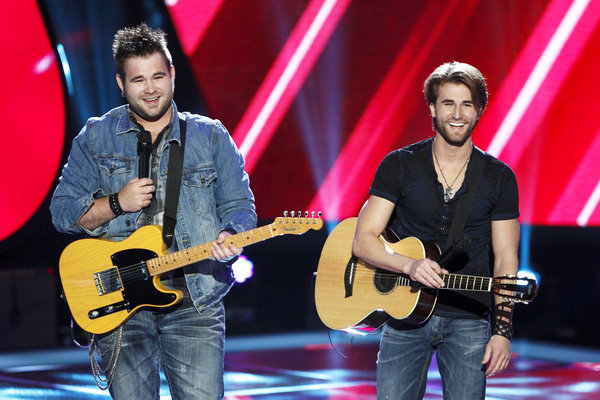 On Season 4 of The Voice, The Swon Brothers have made it past the Battle Rounds, into the Knock Out Rounds and are gearing up for live shows which start tonight. The two brothers, Zach, 28, and Colton, 24, grew up in Oklahoma singing gospel music and have spent years in Nashville knocking on doors trying to find success in the music business. They credit their close relationship with taking their act as far as it’s gone to date — and we love a good sibling team. Here’s what the brothers had to say about being on The Voice this season.

On Song Choice
Zach: We just try to pick songs that we think will connect well the audience and we've already had a ton of our Twitter followers say that we picked their favorite song to do. So it really meant a lot to us that we did our job… Going forward we'll pick songs that will define us as artists because we're thinking about the future and we want people to get a grasp on the kind of music we want to put out. And we want to give after it's all said and done.

Colton: We came into this thing knowing we're going to have to pick songs that show both of us and show that brother harmony. So it makes it a little difficult at some times, at some points, but for the most part we just got our stamp on no matter what we're doing and make people like it.

On the Pressure of Doing Live TV
Zach: The main concern I have when comes to the actual music part of it, it's going to be awesome, it's going to be fun. The stuff that worries me is like falling on stage or something like that, that doesn't have anything to do with music. But other than that man, I'm ready to have good time. And it's going to be the funnest part of the show I think.

Colton: My brother is pretty clumsy, so I see where he's worry about that. So other than that, bring on the live shows, we're ready.

On Getting the Judges’ Comments Last Week
Colton: It's really a scary thing to get satisfied in this competition. It was really great to finally get some props from Adam, because we hadn't received that yet. And so we're doing our job as artists, growing our fan base even throughout the four coaches' opinions. So it was really nice to see him give us some props. Usher is always a character, has always got something really cool to say, or just some witty thing to say. And so it was really cool. But at the same time we weren't satisfied and we won't be until we go home. Or we're in that finale. And that's just the outlook you got to have on this thing. You can be here one day and gone the next. So you’ve got to take everything to heart, but at the same time keep building and growing as an artist. And never get too comfortable.


Zach: I don't ever want to get this feeling that I'm safe on this thing, because that's when you start slacking. It's a great feeling to win the Knock Out, but today's a new day and we're already preparing for next week. So that's basically the way I want to look at until we win the thing. Hopefully that would be a great way to end it. But just the fact that these coaches are taking the time to listen and to give their input, it really means a lot. That alone is worth being here. We've knocked on doors our whole lives trying to get advice and comments from people of that stature. And to have people really open their ears and their hearts to listen to us, it's a dream come true. So that makes the whole show worth it for sure.

On the Fan Support
Colton: To have such great support and a fan base and just friends and family come out and just say, "Hey we're supporting you, that we'll follow you on Twitter or we're going to download you're music." All that stuff it has been really crazy to see. And to see yourself on country charts — we've charted almost every time and it's because of America and a big part of that is back home in Oklahoma. And to see that you really realize how many people care and you also realize how many people you know… It's a really, blessed feeling to know that they're going to get behind us in this thing… We're going to do our part and entertain, but it's going to come down to our fan base and support system to help us win this thing. And we know that. So they're our record label right now and they hold the power in their hands.

On Why Viewers Should Vote for Them
Zach: They should vote for us mainly because we're going to make a difference in the music industry with or without The Voice. This is what we're going to do no matter what. So they might as well get used to us being around. We just feel lucky that we have the support that we do, man. I think when it comes down to it, it's going to be of hopefully they can see our character and see that we're not trying to be something we're not. And I don't think we'll be everybody's cup of tea, but hopefully we'll be enough to stick around, because we definitely aren't done yet.

On Working with Blake Shelton
Colton: As we expected, he started acting more like a big brother. And he's teaching us that we're on the Number 1 TV show in America. And he's still just being really down to Earth and just being a good pal. And he's letting us enjoy the moment… He's made it so we're really at home, that's what it feels like.

Zach: We've been fortunate to meet a lot of people over the years of traveling to Nashville. We've been very lucky. And some of them, I'm not going lie, some of the celebrities are not what you expect. But Blake is definitely one guy that is what you see is what you get. He’s just been a friend. And the more it goes along it goes from someone that's just critiquing you to someone that actually wants to help you. And you can tell that he's very genuine and he's really invested in all of his, all of our teammates. And that being said, we couldn't picked better people to do this with and go to the live rounds with. But it's really cool to see someone at that level actually care. And I think it's going to go way beyond the show. He's a very genuine person and we feel very blessed.

Watch the Swon Brothers on The Voice Monday and Tuesday nights at 8 p.m. EST/7 p.m. Central on NBC.

For related stories check out:
The Voice Contestants Talk About Choosing Their Coaches
Contestants from The Voice Discuss the Difficult Battle Rounds