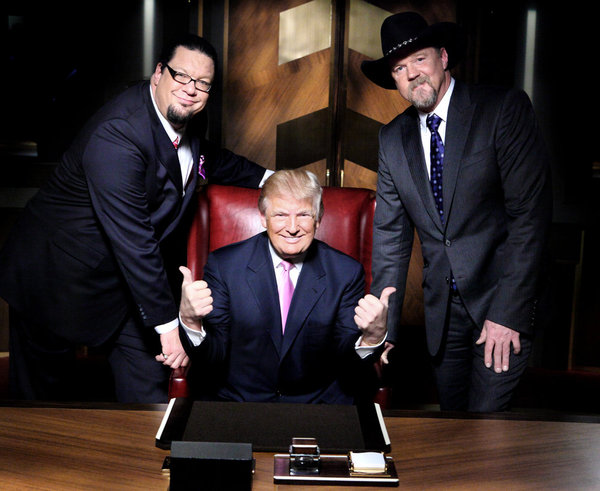 The live finale of All Star Celebrity Apprentice aired on Sunday night. In the end Donald Trump pitted celebrity magician Penn Jillette against country superstar Trace Adkins. Trace came out victorious after raising $664,000 (plus the $250,000 prize for winning) for The American Red Cross. We spoke with all three a few days before the finale aired about this season of the show.

On Keeping the Show Fresh
Donald Trump: “To a large extent it’s the people. Having people like Penn and Trace and so many of the others, Little John, everybody loved his performance and the job he did and so many others. A lot of it has to do with that. You don’t like to change the formula too much because it works... We do change things a little bit every season, but you don’t want to go too much with the big change. It’s like changing football or changing baseball. You don’t want to change too much. But largely it’s the people. It’s the demeanor. Some of the players became great players by watching and by having previously performed. So we do get quite a bit of change into each season actually.”

On Comparing Their Two Seasons
Penn Jillette: “For me it’s no comparison. The first time around I was a little skeptical and uncomfortable and guarded. And then as I grew to trust the show and trust Mr. Trump and I’m afraid to say Trump myself. The second year every show I enjoyed more than the show before and I just had a blast. There was no comparison for me.”

Trace Adkins: “I parrot those sentiments exactly. My first season was much more stressful. This season I came in much more confident. I had a good handle on how this game was played and I knew how to play it and knew how to win it. And so I just felt much better this season.”

On Being Competitive By Nature
Penn Jillette: “It’s very new for me. I’ve never played sports. I’ve never been a game player. I’ve always been in my own little world. And I’ve never really focused on any sort of competition thing. And I actually enjoyed it. Maybe I’ve got to start playing chess or something.”

Trace Adkins: “I, on the other hand, am an old jock and yes, the competitiveness started at a very early age with me and it continues on today really. The business that I’m in — country music — it’s a competitive business. To be relevant in this business means to be competitive and that’s how I continue to be relevant because I continue to be competitive.”
On Whether Trump Expected Penn and Trace to Do Well
Donald Trump: “I wasn’t surprised by them. I would normally tell you I am surprised because a lot of times somebody steps up that you don’t expect. Trace has already done this and he’s already been in the finals, so I expected he’d be good. And Penn was fantastic the first time also. So I didn’t expect that honestly that they would do poorly and I certainly could have seen them getting into the finals absolutely.”

On What Got Them to the Finals
Donald Trump: “They have a tremendous stamina. You look at Trace, he’s got actually stamina but people don’t know it. I think he’s got a very strong hidden stamina… They’re both very smart guys and all of that stuff which you have to be. But they have a great stamina. A lot of people on this show I’ve seen don’t have stamina. The most amazing in a sense was Joan Rivers because when she won she was 77. And I was firing baseball players that ran out of gas that were hitting homeruns 500 feet and they were just exhausted. One was an MMA guy, he was exhausted. They were great, but they were exhausted. And Joan Rivers just kept going. It was amazing. So obviously it’s a different kind of stamina but these two guys had a great strength.”

On Deciding the Winner Before the Finale
Donald Trump: “Sometimes I know and sometimes I don’t. I will tell you honestly in this case I don’t. A lot of times I will have a pretty good idea as to who it’s going to be you know. I’ll give you an example when Brett [Michaels] won. They flew him here in an ambulatory plane. So he’s in an ambulance. He was almost dead three days before with the heart and the whole thing. He could barely walk on the stage and honestly if I didn’t choose him I think I would have been run out of town. It was amazing… It was a very hard thing but it would have been very hard to choose anybody else.”

Celebrities for the next season of Celebrity Apprentice are being selected now. Stay tuned for details.