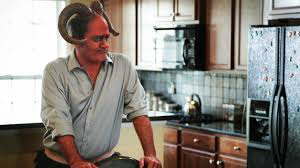 Your Pretty Face Is Going To Hell premiered on April 18 on Adult Swim. The live action workplace comedy stars Matt Servitto (Banshee and The Sopranos) as Satan, Craig Rowin (College Humor Originals) as Claude and Henry Zebrowski (The Wolf of Walls Street and White Irish Drinkers) as Gary. We recently spoke with the three actors about the new series.

Craig started by describing the premise of the off-beat comedy. "The show is basically the everyday inner workings of hell. Not the cliched hell but actually in our American daily life the closest thing that all of us can relate to as hell — your day job."

He continued, "This is the story of Gary, who's an associate demon trying to make his way through the corporate life of hell and Satan is the district manager who's not happy with anybody's work. And I play the intern on the first episode. It's just those monotonous work-related things but then in addition that we also have to go to Earth and our job is to keep our quota of souls coming. We sign over people to Satan and make sure that the people of Earth are being fairly distributed down in hell."

All three actors were very anxious to sign on to the project as soon as they read the pilot script. Matt recalled, "At the time my agent was dismissive of the script and the audition, at a time when I was auditioning for more high profile televisions shows. And I read it and was like, "Oh, no, no, no. This is where you're wrong. I really want to do this series.'"


Craig added, "I got the script and I saw that this is not your average TV show. This is once in a lifetime. My goal is always to work on a project that I'd actually want to watch and this is the show."

The inventive plot is the creation of Dave Willis (Aqua Teen Hunger Force and Squidbillies) and Chris "Casper" Kelly (Squidbillies, Harvey Birdman: Attorney at Law and Stroker & Hoop). Henry noted, "They are brilliant writers… Their specific skill set that came from Aqua Teen and Stroker & Hoop is rapid fire comedy… because it's short, it's really fast and it makes you watch it a bunch of times because you're going to miss stuff."

All three actors were big fans of Dave and Chris' work and enjoy starting with their fully fleshed out scripts and taking them further through improv. Craig stated, "The scripts are just funny on the page. And for me personally, in contrast to Mr. Matt Servitto, I have not even close to as much experience but I have a lot of experience doing improv. To me the best way to be comfortable in a scene was actually to interact with the people around you."

He added, "The most fun things were reading the lines from the script and then not stopping when they stopped and keep going with Henry and Matt… And some of my personal favorite moments on set were just going when the script said to stop."

Since the show revolves around the re-imagined world of hell, all three actors are in heavy red make-up for that devilish look. Henry talked about the process which involves an hour-long application of an alcohol based spray paint. "It's the same stuff they use on swim suit models, for Sports Illustrated… but they did it on big gross men… As an actor and a comedian it's amazing to look in the mirror and not see yourself… you look like a puppet, like a cartoon. It's everything I've ever wanted because I'm having problems with me. I'd love to be a cartoon."

The role of Satan is a bit of a departure for Matt, who has made a career mostly out of playing cops like Agent Dwight Harris on The Sopranos and Deputy Brock Lotus on Banshee. But he did say he called on this experience for Satan claiming he based him a bit on the typical curmudgeonly police sergeants who is always calling the detectives in his office to yell at them.

It was also a bit of a departure for Matt to do comedy, but he says he's learning from his co-stars, "Henry and Craig are true comedians and sketch guys and writers. And I'm just slumming in their world. I'm in awe watching the way the work goes on there. It's an open playing field at any given moment on set in regards to what's going to happen and what's going to be said."

We asked all three actors what they are most passionate about. Henry was quick to say, "I am a very big follower and believer and enjoyer of the paranormal and the occult and horror films." So "Your Pretty Face…" is right up his alley.

Craig replied, "My passion, outside of doing TV and comedy in real life, is watching TV and comedy. I even have a podcast that I watch TV with comedians. I just like talking about pop culture and TV and escaping the actual horrific realities of life."

At first Matt joked, "I like gardening and puppies. Can you be passionate about rainbows?" But then admitted, "Truly comedy is the one thing I love to watch and engage in… But if I wasn't doing this, I'd be in the other theater of the absurd, which is the political scene probably as a reporter or some sort of commentator."

We also posed our favorite Passionistas question to the three actors. "If you could choose one pop culture icon from all time and walk in their shoes for one day, who would you pick and why?"

Henry said, "I've been thinking a lot about Jackie Gleason. I'd love to live Jackie Gleason's life for a day at the highlight of his career when he could do whatever he wanted. He knew where the good food was and I would have liked that. That would have been fun."

Craig shocked us a bit with, "Arnold Schwarzenegger. As a weak man and a people pleaser who likes not offending anybody to be one of the strongest people who doesn't give a shit about anybody. And is willing to ruin relationships for the instant gratification. And he was in Terminator I, Terminator II and unfortunately Terminator III, which was a terrible movie with a great ending. And he was in a movie with Johnny Knoxville recently and he was in Erasur' and Red Heat and True Lies and every big movie that's ever existed. In the movie Pumping Iron, the documentary, he actually wore a t-shirt that said 'Arnold is numero uno.' To be that egotistical is amazing."

Matt was disappointed that Henry took Jackie Gleason because that would have been his first choice so instead he went with Lucille Ball. "I adore her. I love watching 'I Love Lucy' with my folks and laughing our heads off. I loved her offscreen persona being rosy and smoking and drinking. And I love to smoke and drink and I don't get to do much of either one. It was just devil may care. And I thought she was beautiful. I thought she had it all. She had Desi Arnaz, come on."

Watch all three actors on Your Pretty Face Is Going To Hell Thursdays at Midnight on Adult Swim.