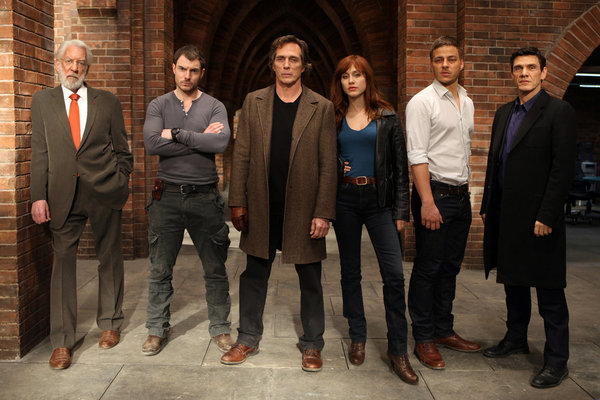 NBC’s new global crime drama Crossing Lines premieres this Sunday. Set in Europe the show follows an elite team of international cops trying to solve cross-border crimes and bring these global criminals to justice. It was created by Edward Allen Bernero, mastermind behind Third Watch and Criminal Minds along with Rola Bauer, Jonas Bauer and Tim Halkin, Emmy-nominated producers of The Pillars of the Earth. Rola, Jonas and Tim run a production company set in Munich and set out to make an international crime drama with the help of show runner Ed. The whole series is filmed in Europe. In a recent conference call interview Ed and Rola talked about the seed of the idea for the show, filming in Prague and what viewers can expect to see in the upcoming season.

On How the Project Came To Be
Rola: ”We have been working predominantly in the limited eight-hour miniseries —The Pillars of the Earth. And we wanted to get into the one-hour series. We looked around at all the different show runners who were available or interested in working in a different independent way and were introduced to Ed Bernero. I'm sure you're aware of Ed's pedigree and his many, many years of experience. So we're considered ourselves very luck to be able to have a chance to brainstorm with him and talked about this idea. And he just immediately broke the story. I mean he said, ‘Oh my God. I have been wanting to do something in this direction.’ At first I thought, ‘Oh, this is Hollywood speak.’ But he truly did have it in his head because he broke the story in literally a matter of weeks. And we have met and we're starting to work together in February. And we went straight to an order of ten episodes on the middle of July. And we started shooting in the beginning of October. And we shot ten episodes and had them all wrapped in the can in the third week of February. So it happened in literally one year from meeting and getting to know to developing, producing it and delivering it.”

On The Seed of the Idea and Casting William Fichtner as Carl Hickman
Rola: “We were concerned about what was happening in Europe, how similar it was to what has happened in the U.S. and how could one create a new team, a team European FBI that could transcend the boundaries and help people. And that's how it started in that… We sat with the broadcasters and we told them our wish list as filmmakers, as producers and the people we would like to have for each of the roles. And Bill was number one for us in the role of Hickman. We had to give them three names and he was number one. I have been hounding, tracking, stalking Bill for many years on working [together]. And when I gave his name to Ed, he was like, ‘Oh I love him. That'd be great. That would be fabulous.’ And so once we had a script we sent it to his agent.’


On Whether Carl Hickman Is Committed to the Team
Ed: “It's an interesting question and actually something that Bill and I talked quite a bit about during the whole season about how committed the character is to the team and when he commits completely to them. For both of us the complete commitment is going to happen more next year even. He was pretty betrayed by the police world. And he's very reluctant to join another group and be part of another team. What happens in the pilot in the first two hours is certainly something that sets him on the course. But the most important moment is when Louie asked him if he wants to feel like a cop again, because Bill and I had many conversations about his state of mind and what he feels like and how he feels betrayed and sort of lost his identity not only with his [getting wounded] but also with the betrayal of the police department and his leaving the NYPD. So it's an ongoing process for him. It's something that he the Hickman character may never fully embrace being part of the team… There's also quite a large element of the characters all in some way, shape or form using each other too. That it's not all just for the same goal. You find out through the whole season that almost everyone has a little bit of an ulterior motive for being where they are and joining this team in the first place.”

On Why They Filmed in Europe
Rola: “We wanted to protect the look and the credibility of the story. We didn't want to put any of our talent in front of a green screen, which is why we made sure that we had the ability to go to these places. We shot Prague for Prague. We doubled it also for other European cities but we also made sure that Paris and Nice and the South of France were very much a part of what the story location was and not pretending to be something else.”

On What About the Show Will Speak to Viewers
Rola: “One of the things that is the DNA in the project is that as the title says it crosses lines. We're living in a global world. We're connected by the Internet. We are trying to have certain things that are common to each other through television. Hollywood has been an example of it in that films transcend the boundaries and are released everywhere. But what we sometimes forget is how we protect our families. That is what the challenge was about for us. When we started developing the idea and we pitched it to Ed, he loved it because he said for him it reminded him of how America had been when there was not an FBI, when criminals could cross from one state to the other and where essentially there was no sovereign structured entity that could look after people. And from that J. Edgar Hoover had set up the FBI. And over here in Europe it doesn't exist. So criminals can travel the borders, can cross over without being really monitored or checked anymore. And Europe didn't have anything that was proactive. There's Europol, and there's Interpol but they didn't really have a structure like that. And I think what attracts people is that ultimately these crimes we can see them anywhere in the world. And this is a team that is proactive. You've seen it in different features where there have been teams from different parts of the world who come together and crack the case. And I think that's an international subject that allows an audience to really connect from a fear factor of how do I protect my family in a normal situation.”

On Being Excited to See the Viewers’ Reactions
Ed: “This is the longest I've ever gone without something being on the air. I'm more used to being in the studio system here in the States where you do something and it's on that September. So just in general I'm just excited about people seeing the show. This is the first time I've ever had the benefit of having the entire thing completed before it ever went on. So it's really exciting to me to know where it's going and that it's all put together in the way we wanted it to be put together… I'm always most excited to see how people accept the family of the show that the character moments come to mean more as the show goes on than they would have in the beginning. So most of the things that I'm interested in seeing is how the people react to the fact that they're seeing people with French accents and German accents and Italian accents. It's just something really different for American television. And I'm just interested in seeing how it plays around the world… I love the surprises, too. There's a couple of surprises in the first two hours that I don't know that many people will see coming.”

On What to Expect This Season
Rola: “One of the things that we've seen in this is Ed's created fabulous character arcs and you're going to be in for surprises on the nemesis of what brought Hickman over. You're going to be intrigued to connect the dots. So we still have the crime of the week and we still have the team resolving cases. But there are a number of layers of mystery that come in. And when you start getting towards the eight, the ninth and the tenth episode, there is a real second layer of a story that makes each one of those characters stronger and quite exciting. Ed finished it off by having us have a cliffhanger on the tenth episode. And he's probably going to get a lot of hate mail because of it.”