Jennifer Delilah's Art and Her Connection to JFK 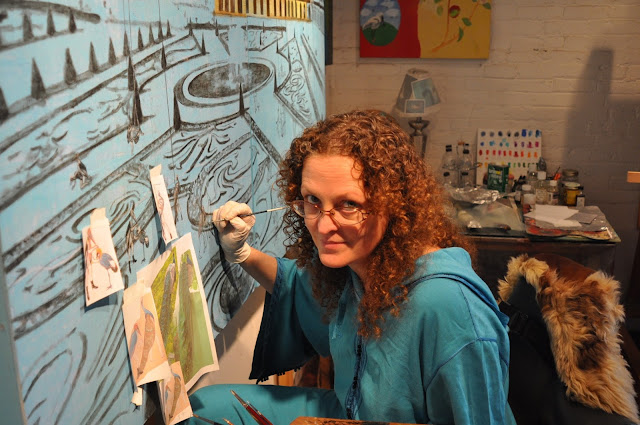 Growing up in a Dallas, Texas, suburb, Jennifer Delilah always surrounded by art. From quilting and sewing with her family to painting with her grandmother, it seemed creativity was in her blood. But there was something else that happened in Dallas that would in some sense influence every piece of art Jennifer ever created — JFK's assassination.

Before she was even born, her dad experienced the tragic event from a peculiar and unthinkable point of view. He was one of two pathology residents working at the Parkland Hospital the day the President was shot and brought in to the emergency room. That event resonated with her family for many years, "There was always this uncomfortable silence around us."

She said her father rarely spoke of what transpired in the hospital other than to say, "It was really scary and everybody in the ER and the pathology department at Parkland Hospital was scared out of their wits. And that's all you need to know."

But she would overhear conversations and realize she wasn't getting the full story. Her imagination kicked in to fill in the gaps. She stated, "I developed this habit of not necessarily taking everything at face value. Not necessarily believing everything I was told… I am in the habit of questioning what people told me, trying to get to the bottom of it. I would try to worm stories out of people and if they didn't provide me with a story I would make something up." 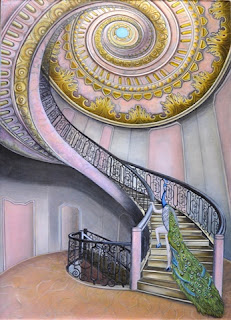 She has used this imagination in all of her works especially in her "Empire" series, done in the style of magical realism. Her goal is to  capture these almost realistic worlds with a twist. She described the style for us, "You look at it and it's a setting that appears to be plausible, like it could actually exist, but the things that are happening within that scene are too strange to believe."

Most of the paintings depict the grand salons and the grounds surrounding the Palace of Versailles. But she has stripped out the artwork that would have existed in the rooms — mythological creatures and aristocracy portrayed as gods — and replaced them with oddities like fantastical birds, city skylines or plantation scenes.

She also added an element of texture to the works by making the walls appear to be a giant beehive. This led her to the realization that if the palace were a beehive, there would most likely be an abundance of birds outside. "That's when I started doing birds that are half humans, particularly female, and half exotic bird."

She continued, "I'm really attracted to the idea of liminal creatures, something that is half human and half something else… I was thinking how satisfying that is as metaphor for being conflicted, having your intellect and your animal self at odds with each other."

Of course, these half-human creatures also add the necessary whimsy into Jennifer's paintings. She noted that humor is very important to her work. "We can approach a subject and be very factual and tell people things that are very hard to hear and they may completely reject it because it's so uncomfortable they can't deal with it. So I started incorporating humor into my work pretty quickly, trying to make things for people so they weren't necessarily offended, shocked or frightened by it."

Jennifer's fascination with history that is predominant in her work was also reflected in her answer to our standard Passionistas question — "If you could be one pop culture icon from all time and walk in their shoes for one day, who would you choose and why?" She picked Oscar Wilde stating, "I would love to see what his process was like — a day of writing and going out to operas, or whatever he did in the evenings. I'd like to go back to a different time frame, one that I always found really attractive."

To see more of Jennifer's work visit her website.


Posted by Pop Culture Passionistas at 10:18 AM