There's Double the Girl Power in the 'Shark Tank' This Season 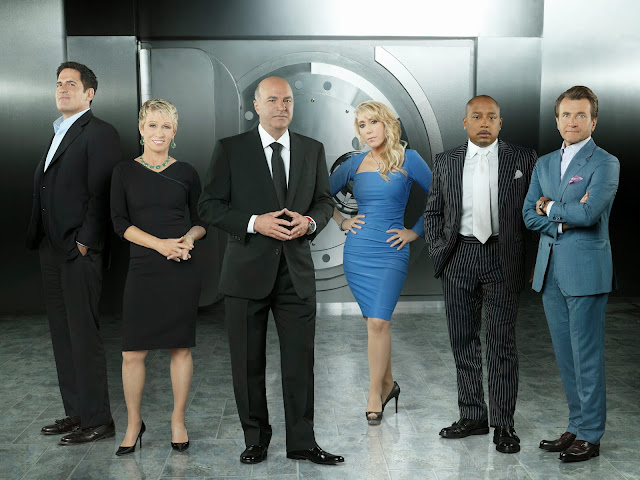 Each year five brilliant, if not always friendly, business moguls have taken a dip in the Shark Tank to lure would be entrepreneurs into their nets. Viewers have become accustomed to seeing either Barbara Corcoran or Lori Greiner seated alongside the four male Sharks — Mark Cuban, Daymond John, Robert Herjavec and Kevin O'Leary. But this year things are going to be different. For the first time the ladies will be on the panel at the same time.

Fans aren't the only ones who have been dying to see the female Sharks in the Tank simultaneously. As Corcoran pointed out, "It's been maybe two years over due, in my opinion. But we're happy we're here."

Just because they're both women doesn't mean they're predisposed to making deals with each other right off the bat. When asked if they've automatically joined forces to enlist would be entrepreneurs, Corcoran said, "Not yet. Not by design. We're almost gender blind. It's just like business as usual."

The inventor and QVC icon continued, "I do not see myself as a woman in business and I didn't grow up thinking that way. I thought I can do anything that I put my mind to doing. And so as I'm sitting up there, I'm just making the right decisions, the smart decisions and my gender has nothing to do with it for me."

Not surprisingly, their male counterparts don't underestimate them just because they're female either. In fact, John admitted he might have dodged a bullet by not sharing the stage with them, saying, "They're really brilliant and they have different ways of negotiating. Lori is very rigid and very laser focused. Barbara is, too, but she goes about her negotiation very, very like the wandering Columbo, Mr. Magoo. And then all of a sudden she comes back and she nails you. And Barbara always does the girl power thing. Fascinating negotiators and I'm not certain if I wanted to be on that panel with both of them because I tend to lose a lot of deals to both of them. So two of them, I would probably really not get a deal done."

Of course, many fans will be eagerly watching to see if there's any fur flying this season but they might not get what they're looking for. According to Barbara, "On the set we have no contention really. But we really should. It would be better for the show because everybody would like to see at least one Shark fight between the girls."

Greiner agreed, "Barbara and I, we get along. We're strong, smart women. We have to respect each other for being where we are. And also, we have fun together."
She added, "A lot of people in the audience, if they're girls, they're rooting for the girls. They want to see that camaraderie."

For his part, Herjavec admitted that he has witnessed that positive vibe at play. "I would have thought it would be a lot more confrontational but they get along well and they bring a different perspective."

But Cuban had a different perspective. "I think it's more confrontational… They go at it. They're both so competitive. And I'll be honest, everybody realizes, now that some Sharks are on and off, that you've got to be at the top of your game or you might be replaced. We have guest Sharks and everything, so that's also raised the game of all the Sharks."

Yet having the two female business powerhouses on the panel together is certainly a major step forward. As Corcoran acknowledged, "The minority has doubled, so it's less of a minority. But back to when we were the token woman on the set, it sends a very bad message. It sends a bad message — I don’t want to say to the young girls at home — some of them want to be Miss America, some of them really want to be in business. So you open that channel. You see two females on a set of guys, looking like they're smart like the guys and right away that is half the power of having two women on the set, before they open their mouths because it sends a visual message."

At that, Greiner chimed in, "Women are equal to men." Not according to Barbara, who declared, "No, women are better than men."

Tune in to watch the battle of the sexes unfold when the new season of Shark Tank premieres on Friday, September 20 at 9 p.m. EST/8 p.m. Central on ABC. And get advice from the experts in the new book Shark Tank: Jump Start Your Business, featuring contributions by the stars of the show.
Posted by Pop Culture Passionistas at 2:00 AM