Chuck Connelly Explores “My America” at the Warhol Museum 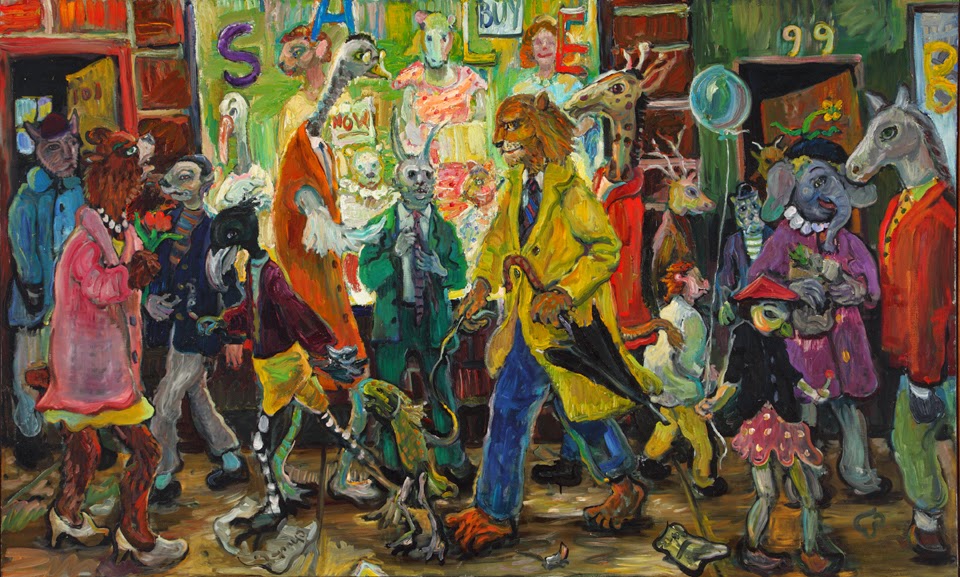 Almost 60 years ago artist Chuck Connelly was born in Pittsburgh, Pennsylvania. But for an artist who admits he “hates going backwards,” what matters is that the painter is back in his hometown for his first solo museum show at the Andy Warhol Museum.


The exhibit, “Chuck Connelly: My America,” is meaningful to Connelly. First of all, it’s dedicated to his late brother Christopher Connelly, Jr.  The artist’s sibling passed away in April and Connelly admitted in a recent one-on-one interview, “My brother was the one I was playing to. He was my biggest fan.”

The location is poignant on several other levels. As he noted, “It means a lot. Everybody I know who is an artist thinks it means something… Also it’s my hometown and I was a big fan of Andy [Warhol] all the time I was growing up. And I knew the Warhols as a kid. I knew his family, so I had a connection that way. I knew his nephews. They were in my classes… And we were competing in who could draw better and stuff.”


But it means more than just a local boy does good. Although he might not have the instant name recognition of his contemporaries like Jean-Michel Basquiat, Connelly has not gone unnoticed during his career.

After graduating from the Tyler School of Art in Philadelphia in 1977, Connelly pursued his artistic endeavors. He spent two years in Germany before coming back to the states, where he established himself in the New York art scene of the ‘80s before settling in Philadelphia in 1999.

There were a few pivotal moments along the way. In the late ‘80s filmmaker Martin Scorsese featured Connelly’s paintings in “Life Lessons,” the famed director’s segment in the film “New York Stories.” As Connelly recounted, “Scorsese called out of the blue. That’s it. I’m off to the races. Nope, goodbye friends, I never liked you anyway… And then that fell apart and nothing happened. And I lived through that.”

In 2008, Connelly became the subject of an HBO documentary “The Art of Failure: Chuck Connelly Not for Sale.” Again it seemed like good fortune might be smiling on the painter. Because of what transpired with ‘New York Stories’ Connelly recounted, “I got so down that they made a movie ‘Art of Failure.’ ‘I’m back.’ And that died down within six months, as well. And I thought nothing matters, nothing lasts.”

Well, one thing definitely lasts — the work of a talented artist — which brings Connelly home again to Pittsburgh. For those still unfamiliar with his work, he describes his style as “expressionist, visionary, American — I always like to throw American in because we’re not getting enough of that — painterly, spiritual, goofy. It’s everything. I have a style perhaps in the way I paint, the way I touch. That’s my thing. But what I paint is also varied, a variety of everything that goes on. I don’t have a particular still life, landscape, portrait. I can do a little pop one day, a little surreal the next, a little minimalist here. I bounce around.”

As a result, the new exhibit is a journey through the artist’s career and his exploration of these many styles. “It starts out with one called ‘Ho-Mo,’ which is Santa Claus. You go then to Germany, I lived in Germany for two years. There’s a painting from there… painted very expressionistically. And then it moves to really hard edge when I immediately went to a more a geometric, a concentric circle kind of drain thing, which has nothing to with that kind of expressionism.”

Connelly continued, “Then we move on to then grandiose, giant landscapy, apocalyptic visions. And then animals in the street — my more frivolous but potent view of humanity walking down the street like animals. And then you get some more regular things like snow outside my window… right out my front steps, snowy from this year when it was snowing then to a still life. One’s more think painted, one’s black and white, one’s colorful — whatever — nothing’s the same."

But despite the wide range, Connelly acknowledges that there is a consistency, which he calls “my touch. I think painting is touch. You can tell when someone’s really painting and feeling it or when they’re just painting by the numbers. You can tell. So that you hopefully can notice.”

For his part, Connelly hopes that because of the exhibit a lot more people will take notice than ever have before. When asked what he hopes people will take away from the show, Connelly replied, “I hope they say, ‘Where the hell’s he been all my life?’”
“I just want people to get it now. I don’t know what they’re getting,” noted Connelly as he jokingly continued in an announcer’s voice, “Now here’s the message, ‘Remember to brush after every meal.’”

He added, “I just want them to get a human struggle — a guy that once thought he had it made, kind of got ignored, had some really rough times, went through alcoholism or whatever… got no gallery, kept going and now he’s got this show at the museum.” He put it into one word, “Perseverance.”

To find out more about the Connelly’s exhibit, which runs now through January 4, 2015, visit the Warhol Museum online. To learn more about the artist go to his official site.