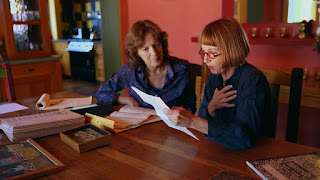 It seems that everybody has one — the enigmatic distant relative with a dark past that becomes the stuff of family folklore. But in the case of Emmy Award-winning writer-director Jane Anderson, her great aunt Edith turned out to be so much more than romanticized, multi-generational mythology. Edith’s journey emerging as an aspiring young artist to being committed to an asylum in 1924 never to be heard from again proves that some family stories are worth exploring. And viewers of the upcoming HBO documentary Packed in a Trunk: The Lost Art of Edith Lake Wilkinson, get to travel with Anderson as she unearths the many mysteries of her great aunt’s tale.


As Anderson recalled, “I can’t pin down the exact moment when my mom explained to me that Edith was a distant relative who had been put into an asylum. What I do know is that I grew up with her work around me probably since I was a three or four year old little girl. So her work was always there.”

Edith’s art inspired the young Anderson, who herself had a penchant for creative endeavors, “I was always in to drawing and painting and I remember my mom had salvaged Edith’s brush case with a bunch of her old brushes and she gave them to me and I painted with them. And unfortunately I wrecked every one of them because I was a stupid little kid. I reckon that if Edith was indeed watching me, she would have been probably amused and perfectly fine about it.”

Compelled to draw, paint and create woodcut prints, Anderson always kept a sketchbook on her many adventures. “I started doing that as a teenager,” she recounts, “And as an adult, I’ve traveled all over the world. I’ve sat on the hill in Africa in the Serengeti and I’ve traveled to obscure parts of the Amazon and Bali and all over. And I always felt as I was drawing in those places that Edith was by my side. And it was never spooky. It was never a burden. It’s always been a lovely, friendly presence. And I’ve always felt an obligation to do her justice.”

Anderson was also fascinated by Edith’s tragic story. But she knew only limited details about her longtime companion Fanny and the attorney George Rogers who mismanaged her money and ultimately had her committed to an asylum. Regardless of the dark details of the past, Anderson is always drawn back to the art itself.

After several previous attempts to bring Edith’s work to the world, Anderson focused her attention on her own career. Directing television shows like The Facts of Life, The Wonder Years and Mad Men and writing projects like The Positively True Adventures of the Alleged Texas Cheerleader-Murdering Mom for which she won an Emmy in 1993.

But it was during a dinner party a few years ago that Anderson’s passion for getting the word out about Edith was reinvigorated. “I realized that I was the exact age when Edith was put away,” noted Anderson. “So again, perhaps, it was getting older, realizing that someday I’d have to find a home for this stuff. Or maybe it was the final tap on the shoulder.”

Anderson and her partner Tess Ayers created a website to spread the word about Edith and her work. They soon approached filmmaker Michelle Boyaner about doing a documentary. “When they decided to do the website they really had to gather a bunch of information,” acknowledged Boyaner. “So when they came to us, we said, ‘Here’s what you know, here’s all the things we don’t know and these are the places we need to go to try to find them out.’”

What followed was a road trip with Anderson in the leading role. According to Boyaner they devised their production plan on “knowing the places where the questions were based so we could try to find the answers. We just literally booked it and took three trips to Provincetown, went to West Virginia, went to Maryland, Northern California to go visit with family who had pieces of it but not really with an agenda then try to find out everything we can when we get to each of these places.”

But first, Boyaner had to convince Anderson to appear on camera in the doc. With only one photo of Edith in their possession and more questions than answers about her, the team needed a face for the film.

As Boyaner explained, “When Jane and Tess came to us and said, ‘Could you do this documentary about our Great Aunt Edith?’ I said, ‘Well, the story I’d like to tell is a little bit different. I’d like to actually follow you guys in your journey and tell her story as we’re on the road and making discoveries.’ So that it would really have the heart and the movement of something living and breathing that was happening as we were filming it.”

She continued, “And to me the most important thing was for it to feel like it was alive and breathing and happening and not a historical documentary but actually like a journey and for people to feel like they were on the journey with us.”

As a result, the film becomes as much of a story about Anderson and Ayers as it is about Great Aunt Edith. But the revelations they make about the long lost relative are both historicially important and mystically charged.

While Anderson might not get the facts that she expected to uncover, she receives answers from a wide range of sources that help her piece together a picture of Edith that is truly fascinating. “I’m always interested in human complexity and no one is entirely a victim,” conceded Anderson. “Crappy, horrible things happen to all of us in life. Some things happen for no good reason. Other things happen because we’ve gone on a certain course and we weren’t entirely watching our own back… Edith had her own troubled emotional course that she had to go through. And it was unfair what happened and tragic. But I’m most interested in her humanity and the why of it.”

Still, Anderson hopes that the documentary isn’t the end of her search for information about Edith. The whole team behind Packed in a Trunk, is prepared to continue to keep the expedition alive. “We’re hoping that we might hear from people who will maybe find some of her work that they didn’t even know was anything. It’s been hanging on their grandmother’s wall,” remarked Boyaner. “Or we’re hoping we might hear from Fanny’s family. We’re hoping for things like that to just start to materialize. By no means is the book closed. We had to finish the film but the story continues as to what we may still find out. So we’re all completely addicted to trying to fill in still as much as we can.”