Adrian Wilson Brings the Heat with His All Consuming Fire 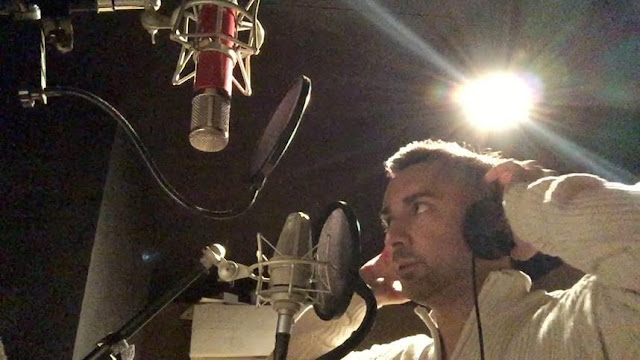 Ask any artist and they will tell you that the road to success is often fraught with pitfalls and unexpected twists and turns. Such has been the case for Adrian Wilson, the Bronx-born singer and actor who overcame great obstacles to become the success he is today.

Raised by his single mother, Wilson was the youngest of four. It was a very simple beginning, not many opportunities for education,” he recalls. “But the thing that was very clear was that I loved school, I loved reading and I loved words. I just wanted to make something of myself despite the odds that were stacked against me.”

When he was six years old, Wilson knew that he wanted to perform. Inspired by the variety shows that he saw on television, he remembered, “I saw a lot of flash and I thought, ‘That is it. I have to do that.’” And that is exactly what he did.

In church, Wilson gravitated toward the music. At school, he joined the glee club. At an equity theater company, Wilson spent the summer as a 13-year-old production assistant and soon got the acting bug, as well.


By the time he was 16, Wilson made his off-Broadway debut and started to put together his own nightclub act. Wearing sequined costumes he sewed himself, Wilson would actually perform at underground clubs — although his mother thought he was just out with friends having fun. Wilson recounted, “Here was a nightclub with club music but I was doing pop songs in the break. And the only other acts besides me were drag queens.”

By the time he was 18, Wilson was fully immersed in his entertainment career. He studied with William Hickey, acted at the Herbert Berghof Studio, recorded demos and even packed a theater with 700 people at his debut headlining concert.

But there was a bigger issue that drove Wilson’s ultimate decision. “The big clincher was that I was gay and I was clearly not willing to hide that,” Wilson revealed. “I had never done it. I had lived in a bubble, I guess, growing up in theater, and I just thought that the relationship that an artist had with an audience has to be an honest one.”

Wilson risked everything and turned down the label’s offer. “It was a really scary thing because you know that a lot of people in the industry, and actors as well, hid it,” concedes Wilson. “But I just thought, ‘It’s just not going to be worth it to me.’ I would have rather walked away than to have lived a life of misery. What kind of career was that? It would have been a fake career.”

But an event that changed the world would also redefine Wilson’s course. Living in New York on September 11, Wilson saw the Twin Towers collapse out his apartment window. Within days, Wilson organized and led a candlelight vigil at Columbus Circle. “The songs that I was singing were spiritual in content but they were pop songs like John Lennon’s ‘Imagine’ or Bob Dylan’s ‘Blowing in the Wind,’ Bette Midler’s ‘The Rose’ — inspirational type-things.”

Moving in that direction musically, Wilson moved to Los Angeles where he found a progressive church that was all-inclusive. As a result, he spent a decade singing in churches across the country doing Christian and pop music and developing his own point of view creatively. “I got a better gauge of who I was. I became a better artist,” Wilson admitted. “Christian music taught me how to get out of the way and let the spirit or inspiration come through.”

In recent years, Wilson decided to get back into pop music. He returned to the studio with producer Kevin Leach and had one major requirement — he was only going to record songs he loved.

His latest release is the title track from his upcoming pop album “All Consuming Fire.” Calling the track “an ode to where I came from,” Wilson says, “we made it into a pop radio format but it happens to be a song about God.”

Next up in October is a cover of Lee Ann Womack’s #1 hit “I Hope You Dance.” Of course this updated version will have Wilson’s spin. He explained, “It’s Lee Ann’s song and I couldn’t touch it unless I thought I could bring something to it. I felt a huge responsibility to do that. What we did is a male take on it… I’m singing from the counterpoint of where Lee Ann Womack sang… We flip it and make it a response.”

The other eight songs that will appear on the full-length album are all originals by Wilson. Clearly this is a chance for him to express himself in a way he wouldn’t have been able to under the watch of that big label deal he turned down all those years ago.

And as Wilson sees it, he has one group to thank for the fact that he has this opportunity today — the record company itself. “Today I’m in gratitude because I see completely a different scenario,” Adrian stressed. “Today I see that my goals went from going for the fame or going for the big contract to wanting to be really good and wanting to be a great artist. So because of that, when I let go of everything to do with the fame, when I let go of all of that, then everything started happening and everyone started calling. By letting go, I was able to get to where I was destined to be anyway.”

To find out more about Adrian Wilson and All Consuming Fire visit his official website.