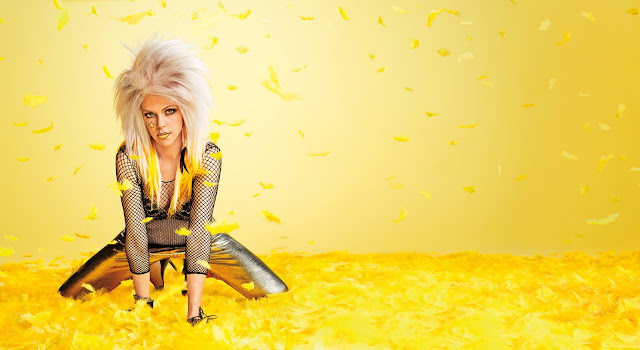 For seven seasons viewers have tuned in week after week to watch the gang on FX's It's Always Sunny in Philadelphia. In spite of the fact that this group of underachievers will lie, cheat, steal, and turn on one another to reach completely inane goals, people love them. Kaitlin Olson plays Sweet Dee Reynolds, the twin sister of Dennis, daughter of Frank and friends, if you can call them that, of Rob and Charlie. In a recent conference call Olson spoke about the evolution of Sweet Dee and keeping her likable.

It's Always Sunny was created by the show's stars Rob McElhenney and Glenn Howerton, who shot the pilot on a shoestring. They starred in the short film along with Charlie Day. When the series was picked up by FX, Olson joined the cast to play Dennis' twin sister. Initially Dee was conceived as the voice of reason within the immoral group, but she quickly became one of the gang.
Olson commented on Dee's evolution, "When I came on board we didn't really know each other that well and so those guys were writing a show for themselves and they wanted a female character. They definitely wanted to bring in somebody who was going to be able to hold her own, the character, in terms of being a part of the gang, but they said to me, 'We don't really know how to write for a woman.'"

She continued, "I said, 'Well please don't think about it in terms of writing for a woman because what you're writing for yourselves is really funny and that's what I want to do. So just write what you think is funny, and I'll bring the female aspect to it.'"

She admitted that in the first few episodes they were finding their groove. But she recalled that the more they got to know her, her sensibilities and her comedic chops "they started writing more for me and giving me bigger story lines and more ridiculous characteristics. That was more fun for me, and I was having more fun doing it. So I think I was doing a better job of it. It has evolved in that way so now I feel like we're all pretty equal and every character has their own selfish qualities, but I think they're all just as ridiculous, which is so much more fun to play than the voice of reason or 'the girl.'"

The rest of the gang feels no qualms about dismissing Dee and making it perfectly clear that they don't like her. As far as this aspect of the relationship Olson remarked, "I love it. It's hilarious. One thing I loved this season, too, in the 'Frank's Little Beauties' episode where we're all standing in the back office. I'm talking about how I used to do pageants, and Frank is saying how ugly I was, and I would really try and put on a lot of makeup, and I take that as a compliment."

She continued, "I love moments like that where they're just completely making fun of me because normally my character's really upset by it, but I love it when it's just so normal that I don't even really hear it anymore."

Of course Sweet Dee is no angel either. No one takes pity on her that the boys don't treat her well. Still despite the fact that even her own Gangmates don't like her she is adored by the fans.

Olson explained, "She doesn't see herself as reprehensible. She thinks that she's a lovely person who just hasn't been given opportunities in life. The reason that I love her, the character I've ended up turning her into, is that she's just so insecure. Ultimately she's just desperately trying to get these guys to acknowledge her as part of their group and that's so sad to me and so funny. It just disarms her a little bit. There's something about that that forgives all of the despicable acts because she's just so clueless and needy and just wants to fit in ultimately… And I that's at the root of most people… I find something very endearing and funny about desperate, insecure people, I guess."

It's Always Sunny in Philadelphia has been picked up for two more seasons. To find out more about the show visit the official website.