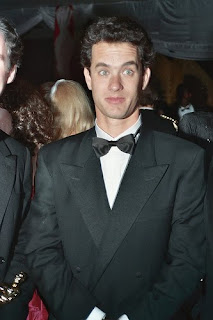 This weekend Matthew Perry is "17 Again." Oh, right -- no one really cares that the ex-"Friend" plays the grown man who returns to high school in this sure-to-be-box-office winner. This weekend ZAC EFRON is "17 Again." But we have to ask: Does the world really need another movie where an old guy swaps bodies with a teenage boy, or where a woman goes back in time to relive her youth? There have been some great age-switching movies through the years as well as some real stinkers. Here are the best and worst of the genre.

How could there an age-swap movie without the oldest actor in the history of the industry -- George Burns? In this version, 81-year-old Jack wishes he was a teenager and gets to switch bodies with his 18-year-old grandson, David. Really bad news for David, because not only is he trapped in an elderly man's body, said elderly man happens to be in a coma. Great news for the then-92-year-old Burns: all he had to do was lay around in a hospital bed for the majority of the film.

No one ever has or ever will play a boy trapped in a man's body better than Tom Hanks in "Big." We dare you to argue. The subtleties in his performance are mind-boggling: the naive crooked smile when Elizabeth Perkins invites him for a sleepover; the silly string romps with his 13-year-old best friend, Billy; the innocent kid spitting caviar into a napkin. It's rumored that Hanks had David Moscow (the kid who played the 13-year-old Josh Baskins) act every scene for him, so he could see how a tween would really behave. But we think it was more mastery than mimicry that made Tom so believable.

We have to admit, Jennifer Garner is undeniably adorable in this movie. We usually wouldn't recommend a flick with one cheesy sing-along scene, let alone two, but its slumber-party scene, where the girls warble "Love Is a Battlefield," and the big "Thriller" dance number are actually kind of fun. Stop rolling your eyes -- they really are. Just wait until a rainy Saturday afternoon, put on your PJs, make some popcorn, and let yourself be 13 again.

This one's so good they made it twice (three times, actually, if you count the 1995 made-for-TV movie with Shelley Long). And although we're partial to the 1976 Barbara Harris/Jodie Foster original, Jamie Lee Curtis rocks in the 2003 remake. Lindsay Lohan, though shockingly not horrible, doesn't hold a candle to Foster. If we could break open a fortune cookie, wish for time travel, and make actors switch bodies, we'd like to see Jamie Lee Curtis and the 13-year-old Foster in the ultimate "Freaky Friday" mash-up.

It's 1987. You're casting an age-swapping movie. Clearly, you need Kirk Cameron, from TV's "Growing Pains." He's a superstar. The Sean Penn of his generation... maybe? (Suspend your disbelief and stay with us, OK?) So, who should play the hot, young actor's dad? Hmmm. He must have a talent equal to Cameron's genius. Aahhh, of course -- Dudley Moore! But would this star-studded film win the smack-down of age-swapping films that went head-to-head-to-head at the box office within the space of a year: "Like Father Like Son" vs. "18 Again!" vs. "Vice Versa"? It sure would! While "Vice Versa" grossed $13.6 million in the U.S. and "18 Again!" came in at an embarrassing $2.6 million domestically, "Like Father Like Son" seemed like a blockbuster with a $34.4-million take.

Not a lot of surprises here. Father (Judge Reinhold) and son (a "Wonder Years"-era Fred Savage) switch bodies and walk in each other's shoes for a few days. Father goes to high school and deals with bullies and hockey games. Kid goes to work and screws up dad's career. But wait. There's a twist, after all! The two were able to make their body-swapping wish come true thanks to an ancient Chinese skull that Dad accidentally acquired on an overseas trip, and the skull's rightful smuggler owners arrive to steal it back. Body-swapping with intrigue. This one has it all!

This 1986 fantasy dealt a daring twist to the age-swap genre. Rather than having a younger actress play Kathleen Turner's part as a teenager, the filmmakers let the then-32-year-old Turner play that role herself. Let's just say we found it uncomfortable (the Academy found it Oscar-worthy, but we don't always agree with them). Still, this creative choice was not the worst part of "Peggy Sue Got Married." The low point for us was Nicolas Cage's insanely distracting, over-the-top caricature of Peggy Sue's high school boyfriend, Charlie, which Cage later told Conan O'Brien he based on Gumby's clay-horse pal, Pokey. Shades of bad Cage performances to come.

Talk about a nightmare. Why would a well-respected actor like Jason Robards agree to be in an age-swap movie with Corey Feldman? We have no idea. But he did. The fact that the film also starred Corey Haim must have been icing on the cake for Robards. Needless to say, he didn't return for the sequel, "Dream a Little Dream 2," which focused on Feldman and Haim, whose characters could manipulate each other's body movements while wearing magical sunglasses. And we wonder why their friendship fell apart?