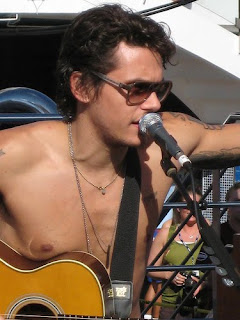 Are we the only ones who were blown away when we saw Kathy Griffin's super-hot bikini body at the 2009 GLADD awards?

Kathy herself has admitted to body issues. She's had plastic surgery, and we've watched her exercise and try to eat right on her reality show, "Life on the D-List." But clearly, Kathy is finally doing something right.

So as we prepare to slip into our swimsuits for the first time this summer (and believe us, we expect to be sadly STUNNED by what we see in the mirror), we decided to look back at some of our favorite swimsuit shockers from Raquel Welch to John Mayer.

Photo gallery: See some of the most shocking swimsuit looks through the years.

We highly doubt that this is what Betsy Ross had in mind when she sewed those original stars and stripes. But we know this look made a lot of guys stand up and salute.

Never before or since has a "bathing suit" fallen more squarely into the "too much information" category. At least Sacha Baron Cohen got paid good money to don this suit in his uproariously funny film.

John Mayer, however, just thought he was being funny when he threw on a replica of Borat's mankini for fans during his Mayercraft Cruise in 2008. Sometimes it hurts too much to laugh.

39-year-old Demi Moore blew people's minds when she rose out of the ashes of what used to be her Hollywood career (OK, she hadn't appeared onscreen in a big studio movie in six years, but by Tinseltown standards, that's a loonnngg break) and reemerged triumphantly with a bikini body to rival that of her much younger "Charlie's Angels: Full Throttle" co-stars, Cameron Diaz, Drew Barrymore, and Lucy Liu.

Goldie Hawn on "Rowan and Martin's Laugh In"

Which would you rather have watched on TV in the late '60s: "The Doris Day Show" or some ditzy blonde in a micro-bikini covered in tattoos? We go with Goldie all the way.

Hank Azaria in "Along Came Polly"

Set aside your thoughts on the tiny white Speedo and Fabio hair; we were stunned when we saw that Phoebe's timid "scientist guy" from "Friends" and the voice of Moe Syzlak on "The Simpsons" was a totally beefy stud.

Bo Derek's flesh-colored swimsuit was truly as close to being naked as a corn-rowed girl could be while still wearing clothes. No wonder everyone thought she was a perfect "10."

Diana, the Princess of Wales

Princess Di sure shattered the stuffy, pillbox-hat-and-matching-purse image of the Royal Family as she frolicked in this eye-popping orange number.

We know it wasn't nice, but can you blame people for spreading the word that ultra-skinny Nicole Richie had an eating disorder when photos of her beyond-boney body started surfacing? Even Nicole must have been freaked; she denied being anorexic or bulimic but reportedly sought help from both a nutritionist and a therapist.

This isn't the only time Cheryl Tiegs shocked people in a paper-thin white bathing suit. She was infamously photographed in a way-too-revealing, wet fishnet number while posing for the Sports Illustrated Swimsuit Issue in 1978. This lingerie-looking suit is demure by comparison.

We're not saying that a woman of 45 is too old to wear a bikini, and Melanie's body is aging just fine with clothes on. But we have to point out that she's a mother of three, and all we can say to her is, "Mel, no child wants to see photos of their mom in a leopard-skin bikini." Can't you buy one of those suits with a skirt like our mom used to wear to spare your kids the humiliation?

We were more shocked that Washington's least romantic couple were dancing in the sand than we were by the way they looked in bathing suits. But still, we wonder if this shot would have jeopardized our standing as the most powerful nation in the world if it had fallen into the wrong hands.

We know she's a cartoon character, but we couldn't believe that our favorite dowdy drawing would even dare to step into this midriff-building getup.

Posted by Pop Culture Passionistas at 10:34 AM