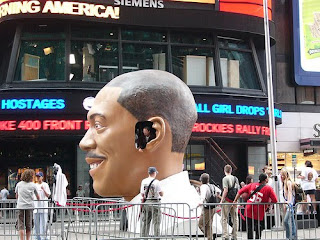 It's a big month for Eddie Murphy fans. Not only did he celebrate the 25th anniversary of his groundbreaking stand-up film "Delirious" with a special-edition 2-DVD set, but his new family-friendly flick, "Imagine That," is opening in theaters June 12. We're still amazed the once-edgy young comedian (whose influences included the very adult Richard Pryor and Redd Foxx) in the red leather jumpsuit has grown into a kids-movie megastar, thanks to such fare as "The Nutty Professor" and "Dr. Doolittle." But then again, Eddie's always been full of surprises. Join us as we track the very strange turns he's taken since he hit the scene on "Saturday Night Live."

Eddie not only dreamed of being in showbiz as a kid, he also started his stand-up career when he still was one -- at the age of 15. And despite enrolling in Nassau Community College (to appease his mother), he continued working the New York comedy-club circuit through his late teens. But by 1980, the then-19-year-old was no longer satisfied with that, so he placed a call to "Saturday Night Live" talent coordinator Neil Levy. After a bit of begging and six auditions, Eddie finally secured a spot originally slated for Robert Townsend, who -- unfortunately for him -- had not yet signed a contract.

Eddie wasn't an overnight sensation; he joined the show as a featured player and didn't become a regular until later that year. But when he finally got the chance, he made an impression. It was a lackluster season for "SNL," and virtually everyone in the cast (including Charles Rocket, Gilbert Gottfried, and Denny Dillon) was let go, except Eddie and Joe Piscopo, who both returned in the fall of 1981. And, well, the rest, as they say, was history.

He Went Behind the Camera -- Once

In a typical case of celebrity self-indulgence, Eddie leveraged his star power to go behind the lens in 1989 to make his directorial debut, "Harlem Nights." The period gangster comedy teamed him onscreen with his stand-up idols, Richard Pryor and Redd Foxx. Although the film has some laughs, it failed with critics and didn't measure up to Murphy's other box-office successes, like "Beverly Hills Cop" and "Coming to America." Sure, it scored an Oscar nomination... for Best Costume Design, which it lost. But it was a "winner," in a sense, when Eddie was handed a Golden Raspberry for Worst Screenplay. The Pryor connection doesn't end there. Murphy's in talks to reteam with "Dreamgirls" director Bill Condon to portray the late comedian in a biopic, "Richard Pryor: Is It Something I Said?"

He Wanted to Be a Pop Star

In another typical case of celebrity self-indulgence, Eddie used his superstar status in 1985 to launch a music career. The result: a significantly lame single called "Party All the Time" (as in, "My girl wants to party all the time, party all the time, party all the ti-ime"), produced by Rick James, that actually made it to #2 on the Billboard Pop chart. The track appeared on the forgettable "How Could It Be," which peaked at #26 on the Billboard 200 and #17 on the R&B/Hip-Hop Albums charts. A follow-up, "So Happy," was released four years later. Thanks to the #2 R&B single "Put Your Mouth on Me," that album hit #22 on that chart. In '93 Eddie inflicted more musical pain with "Love's Alright," the "highlight" of which was a little single called "Whatzupwitu," featuring Michael Jackson. This time out he didn't even hit the charts.

His Brother's Funny Too

After making his film debut in "Harlem Nights," Eddie's older brother Charlie kept on acting. He's appeared in "Mo' Better Blues," "Lovesick," and "Night at the Museum." Besides being related to Eddie, Charlie is best known for his semi-autobiographical sketches on "Chappelle's Show," in which he reenacts the good times he enjoyed in Eddie's posse during the comedian's glory years. In classic skits, he took on a "Purple Rain"-era Prince and the Revolution on the basketball court and recalls a Studio 54 run-in with "habitual line-stepper" Rick James. Since the series' end in 2006, Charlie's continued to act in films like "Norbit" and "Frankenhood" and tour the stand-up circuit."

There are a couple of theories about why Eddie wasn't in "Ghostbusters," even though the role of Winston Zeddemore was written with him in mind. Some say that the movie needed a straight man, not another comedian, so director Ivan Reitman decided against casting him. Others say that Eddie turned down the part and tried to get Reitman to hire his buddy Arsenio Hall instead. Either way, the part went to Ernie Hudson. Coincidentally, Hudson auditioned for the voice of Winston in "The Real Ghostbusters" cartoon. He didn't get the gig. That one went to Arsenio.

When Redd Foxx clutched his chest during a break on the set of his new sitcom "The Royal Family" in 1991, co-star Della Reese and the crew thought he was joking around, reprising his legendary "I'm coming, Elizabeth!" bit from "Sanford and Son." But sadly, the comedian suffered a real heart attack and died. He was nearly destitute. In a tribute to his idol and "Harlem Nights" costar, Eddie paid for Foxx's Las Vegas funeral but did not join Lola Falana, Gladys Knight, and roughly 600 other guests to pay his respects in person. Instead, he sent a tribute that was read on his behalf.

Spike Lee is NOT a Fan

Spike's mother must never have imparted that sage advice from Thumper's dad to her son: "If you can't say somethin' nice, don't say nothin' at all." He's been criticizing people for years. He didn't like that Clint Eastwood made two films about World War II and didn't cast African-Americans. He spoke out against Jesse Jackson after the activist accidentally made disparaging remarks about then Presidential candidate Barack Obama into a live mike (which Jackson thought was off). And he wasn't too pleased with Snoop Dogg bringing his whole pimp lifestyle to the mainstream in Chrysler ads. Lee found fault with Eddie back in 1991, telling Playboy that the comedian/actor didn't get enough "black people hired at Paramount." He felt that Eddie should have used his billion-dollar box-office clout to provide more opportunities at the studio for African-Americans. Maybe that's why Spike plans to make his upcoming James Brown biopic with Wesley Snipes in the lead instead of some people's #1 choice: Murphy, who was Oscar-nominated for his fictional version of Brown in "Dreamgirls."

He's a Lover, Not a Fighter

Despite being married for 13 years to his now-ex, Nicole Mitchell, Eddie's found time to date or have moments with some of Hollywood's hottest and, in at least one case, most unusual women. His little black book includes Robin Givens, Whitney Houston, Halle Berry, and Mariah Carey. Along the way he's also managed to have a run-in with a transvestite prostitute named Atisone "Shalomar" Seiuli (who he insists he was just helping out with some spare cash and a ride), to get Spice Girl Mel B pregnant (which he denied until a paternity test proved otherwise), and to "wed" girlfriend Tracey Edmonds in an unofficial ceremony in Bora Bora. The marriage lasted 13 days.

He Hails the King

"Fans of "Delirious" will remember Murphy's spot-on impersonation of Elvis Presley. It turns out Eddie's a big fan of the King, of whom he's said, "That's my idol, Elvis Presley. If you went to my house, you'd see pictures all over of Elvis. He's just the greatest entertainer that ever lived. And I think it's because he had such presence."

Everyone remembers that when Eddie lost the Best Supporting Actor Oscar to "Little Miss Sunshine's" Alan Arkin in 2007, the "Dreamgirls" star left the ceremony in a huff. But Eddie needs to remember he's been a winner in the past. There's his Golden Globe for "Dreamgirls"; the Academy of Science Fiction, Fantasy & Horror Films Saturn Award for his multiple characters in "The Nutty Professor"; his Annie Award for giving voice to "Shrek's" Donkey; and a whole bunch of People's Choice and Kids' Choice honors. But Eddie also holds a record no one's ever achieved. He's the only person to win Actor, Supporting Actor, and Supporting Actress awards, all for the same movie. Unfortunately for Eddie, the "honor" came from the Golden Raspberry Foundation, which gave him statues for all three categories for the parts he played in 2007's "Norbit."

Written by by Amy & Nancy Harrington

Posted by Pop Culture Passionistas at 10:35 AM