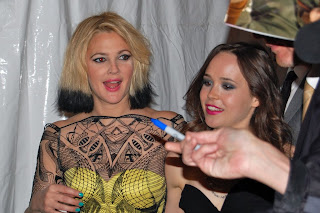 We love Drew Barrymore so we were really hoping that her directorial debut, "Whip It," would be a huge success. After all, she's been in the movie business for almost 30 years – we figured she'd have picked up a lot of skills over time. But not only did Drew fall short on her opening weekend, but she came in sixth place – way behind "Cloudy with a Chance of Meatballs" (which had been out for three weeks) and "Toy Story/Toy Story 2 (3D)" (films that came out over ten years ago). The total box office for the roller derby disaster’s opening weekend? A meager $4,650,812. Talk about getting whipped.

The movie isn't the first big screen flop and it won't be the last. But hopefully it won't go down in history with "Howard the Duck," "Glitter," and "Gigli" as one of the biggest big screen fiascoes of all time.


Dune (1984)
Fans of Frank Herbert's 1965 sci-fi novel "Dune" had been waiting almost 20 years for a big-screen version of the story of Paul Atreides. First, a David Lean adaptation was derailed by the unexpected 1973 death of producer Arthur P. Jacobs. The next director hired wanted to co-direct with a team he called his "seven samurais." This group of filmmaking warriors included Orson Welles, Salvador Dalí, and Hervé "da plane, da plane" Villechaize. Needless to say, that fell apart. Ridley Scott stopped by in 1979 but moved on to direct "Blade Runner" when his older brother passed away and he realized spending two-and-a-half years of his life on "Dune" probably wasn't the best idea. And then David Lynch, hot off "The Elephant Man," was hired. He had never read the Herbert novel. So imagine fans' disappointment when they finally saw the 1984 film, a confusing and gory two-hour-plus romp in the sand with a then-unknown named Kyle MacLachlan and the always boring (whether singing or acting) Sting. The soundtrack by Toto, of all bands, did not help. The film earned just over half of its $45 million budget back at the box office.

Ishtar (1987)
It seemed like a home run on paper: dashing star Warren Beatty teamed with lovable everyman Dustin Hoffman in a film directed by comedy legend Elaine May. A Hope/Crosby-esque road movie for a new generation. But production ran amok, and the budget rose to an estimated $55 million. Unfortunately, the film only made $14 million at the box office. Frankly, the movie isn't that bad. So what happened? The legend goes that David Puttnam, who came onboard as head of Columbia Pictures midway through production, spread negative stories about the film to the press prior to its release because he had personal problems with Beatty and Hoffman.

Hudson Hawk (1991)
Proving that some people are better off in front of the camera, Bruce Willis used his celebrity power to not only star in but also co-write the story for "Hudson Hawk," an over-the-top slapstick action movie. But the constant rewrites and plot changes during production showed on the screen. Add to that the bad and confusing marketing campaign that pitched the big-screen comedy in the Willis-style "Die Hard" tradition. The $65 million film pulled in only $17 million. Luckily for Bruce, his John McClane movies have done much better -- and he's been smart enough since to not write another screenplay.

Soldier (1998)
You'd think after releasing "The Postman" (Kevin Costner's post-apocalyptic "dude in a desert" flop) in 1997, Warner Bros. would have learned its lesson. But just one year later, they put out "Soldier" (Kurt Russell's post-apocalyptic "dude in a desert" flop). Kurt's main character speaks 79 words during the 99-minute movie (11 are "sir" -- he is a soldier, after all). That's about one word every 1.25 minutes. A total of 24 lines of dialogue, the longest being "Affirmative, two, report to nine and commence firing." Powerful stuff. The film reportedly cost $75 million and opened at about $6.5 million. That's about $82,500 per word.

Wild Wild West (1999)
It seems almost impossible to make Will Smith un-charismatic. Especially, one would think, if you put him in a remake of one of the most entertaining and imaginative TV shows of the '60s, "The Wild Wild West." But the Will Smith we love got lost somewhere amid a bad screenplay, overblown visual effects, and a villain with only a torso (it was, in reality, Kenneth Branagh's talent that got cut off at the waist). Even Kevin Kline and Salma Hayek couldn't help save the train wreck. Although the film cleared more than $200 million worldwide, it reportedly cost $170 million to make -- not a worthwhile profit margin by Tinseltown standards when you add in marketing costs -- and it was a critical disaster. And another movie-franchise dream died in Hollywood.

Battlefield Earth (2000)
Universally considered one of the worst films of all time, "Battlefield Earth" starred John Travolta as a lumbering, Frankenstein-like alien with dreadlocks. Heard enough? It gets worse. Scientologist Travolta's passion project was based on the first half of a novel by Scientology founder L. Ron Hubbard. But it was such a major flop that the planned sequel (which covered the book's second half) was never made. Oh, and the fact that its production company was sued for padding the budget by $31 million and went bankrupt didn't help matters. So even though the $75 million film actually cost only $44 million, its $21 million U.S. box-office tally was still not good news.

The Adventures of Pluto Nash (2002)
The outer-space comedy had been in development for about 15 years. That should have been the first warning sign. Then it sat on a shelf for two years after filming was completed. Bad sign #2. The film's star Eddie Murphy seemed to walk through his role, and his performance was painful, the ultimate red flag for a movie flop. The results? The $100 million picture earned a total of about $8.9 million worldwide. In absolute terms, "Pluto Nash" suffered the greatest financial loss of any film ever made. Its embarrassment was otherworldly.

Planet of the Apes (2001)
OK, so it made almost $363 million worldwide (and only cost $100 million), so by Hollywood standards it was technically a success. But to us personally it is one of the greatest mistakes in filmmaking history. We were genuinely excited when we heard our favorite childhood movie was going to be remade by one of our favorite directors, Tim Burton. Let's face it, the only thing better than a monkey movie is a TALKING monkey movie. We ordered our tickets in advance. We got in line for the best seats and excitedly devoured our popcorn before lights out. Then came Tim Burton's "Planet of the Apes." It lacked not only the charm of the original but also the charm of every other Tim Burton movie ever made. 20th Century Fox clearly agreed. Despite the film's box-office success, the previously discussed sequel never saw the light of day.

Speed Racer (2008)
We'd like to think that "Speed Racer" is proof that the Wachowski Brothers are truly overrated. Yes, yes, yes, we know they made the sci-fi bible of the new millennium, "The Matrix." But we don't have to remind you that they also made its ultra-disappointing sequels, "The Matrix Reloaded" and "The Matrix Revolutions," AND they wrote "Assassins," the Sylvester Stallone/Antonio Banderas flop that would have made this list had anyone had any expectations for it. Their $120 million "Speed Racer" made only $97 million worldwide and tainted the image of one of the greatest animated TV shows of all time. The allegations of animal mistreatment didn't help, either. Chim-Chim should have taken the blue pill.

Kevin Costner: Film Flop Poster Boy
OK, it's not a movie, it's a man. Kevin Costner, the poster boy of major motion picture disappointment. First there was "Waterworld." Then he followed his Oscar-winning directorial debut, "Dances With Wolves," by helming "The Postman," which was little more than "Waterworld" in the desert. And when it finally looked like he was going to earn some indie cred, he starred in "3000 Miles to Graceland." The three films earned a total of 14 Golden Raspberry Award nominations. And Costner? He earned a Razzie nom for Worst Actor of the Century for his body of work, including "The Postman," "Waterworld," " Robin Hood: Prince of Thieves," and "Wyatt Earp."


Written by Amy & Nancy Harrington
Originally for GetBack.com
Posted by Pop Culture Passionistas at 10:03 AM