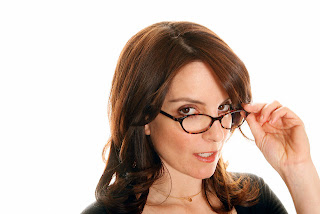 In the new Tina Fey cover story for this month's Harper's Bazaar, Tina proclaims Botox is not for her and working out is selfish. We always we knew we liked Tina Fey. She's our kind of girl. And her blatant dis of Hollywood's vanity driven lifestyle choices got us asking that age-old question, why can't people just be happy with what God gave them? Why is a nose with a bump in it so much worse than a button nose? When did everyone decide that lips had to be big and puffy to be sexy? It's hard not to blame Angelina Jolie, isn't it?

And while some celebs have had their "deviated septums" repaired (wink-wink, nudge-nudge) with tasteful results, others have taken it so far they barely have a nose left at all.

These days so many older stars hardly look their age, it seems obvious that they've spent a lot of money on improvements, even if they deny going under the knife. Other celebrities, however, have owned up to at least some of the work done on their faces over the years, especially when they've been unhappy with the results.

So from least to most tasteful, we give you the best and worst of celebrity plastic surgery (and yes, collagen and Botox DO count).


Jennifer Aniston
Jennifer Aniston admitted in 2007 that she did, in fact, have rhinoplasty to correct a deviated septum. She denies doing it for cosmetic purposes, and we almost believe her, because her nose seemed perfectly fine and not really in need of any renovations.

Kathy Griffin
Kathy Griffin makes no bones about the fact that she's had plastic surgery, including an eye-lift, a face-lift, and liposuction. In fact, she includes it as part of her stand-up act. But, Griffin says, since the physical changes didn't really boost her career, she's decided to come to terms with her body as is and keep the rest of herself intact. We think it's funny that despite all that work she doesn't really look that much different now than she did then.

Janet Jackson
Janet is the only Jackson to come out and admit that she's actually had plastic surgery. She confessed in 2006 that she had a nose job when she was 16 years old. All the while, she denies that she had a rib or two removed to have a smaller waist.

Jennifer Grey
No one should underestimate what a little facial character can do for a career. Are we right, Jennifer Grey? In the early '90s Jennifer had a botched nose job that required a second corrective surgery. The result: a perfectly beautiful button nose. The problem? No one recognized the once charmingly cute actress we loved in "Dirty Dancing." Even Jennifer admits it was a mistake that took her from stardom to anonymity.

Kenny Rogers
Lots of stars resort to plastic surgery in the hopes of finding the fountain of youth. A self-proclaimed "Bionic Man" who has had work done all over, Kenny Rogers says he regrets changing his looks so drastically, missing the "warmth" once present in his eyes. Don't forget, Kenny, sometimes you need to know when to walk away, know when to run.

Janice Dickinson
When your whole existence is based on looks, it's hard not to obsess about them. So it's not surprising that a supermodel like Janice Dickinson admits to being addicted to plastic surgery. What price beauty? Well, Janet has reportedly spent about $100,000 on procedures. And that eats up a lot of time: she flies to Dallas every six months for Botox injections.

Lisa Rinna
As with most indulgences, it's easy to slip into the "too-much-of-a-good-thing" category. That's what happened to Lisa Rinna. What started as a little bit of Botox here and there, escalated to an injection of Juvaderm in her cheeks. The results left even Rinna admitting that she looked like "a freak." She's vowed never to do anything that changes the shape of her face again and to stick to the fresh look she feels she gets from Botox. We're just left wondering what's up with her lips.

Mickey Rourke
This is a tricky one because, honestly, a lot of the damage done to Mickey Rourke's once-handsome face is the result of his short-lived boxing career. While in the ring he suffered numerous cuts and bruises, two broken noses, and a shattered cheekbone. No wonder Mickey had to resort to plastic surgery. Clearly, his first mistake was stepping into the ring at all, but that tragedy was compounded by Mickey's choice of surgeons, who he admits in hindsight wasn't very good. Mickey, you're lucky you were a good actor and not just another pretty face.

Priscilla Presley
Priscilla Presley was such a beautiful young girl that she landed the most eligible bachelor in history: Elvis Presley. For a long time she seemed to be aging gracefully; if she had work done, it was tasteful. But in 2003 Priscilla went to see "Doctor" Daniel Serrano, who had a new beauty secret he claimed was better than Botox. His secret? Injecting Hollywood elite -- including Priscilla, Shawn "Mrs. Larry" King, and Lionel Richie's wife, Diane -- with a low-grade silicone similar to the one used to lubricate auto parts in his homeland of Argentina. YIKES! Oh, did we mention that Serrano wasn't actually a doctor after all? Serrano went to prison, and Priscilla was left to go through corrective procedures.

Joan Rivers
Joan Rivers has had nine plastic surgeries, and she's not afraid to say so. So not afraid, in fact, that she has made it the subject of her new book, "Men Are Stupid... and They Like Big Boobs: A Woman's Guide to Beauty Through Plastic Surgery" (cowritten with Valerie Frankel). Chapters in the book include "Botox, Baby!," "Plump It Up: Lips," and "Filler Up: Wrinkles." But the real draw to the book, however, is Joan dishing about other celebrities who've gone under the knife. Beauty can be so ugly.

Written by Amy & Nancy Harrington
Originally for GetBack.com
Posted by Pop Culture Passionistas at 11:50 AM