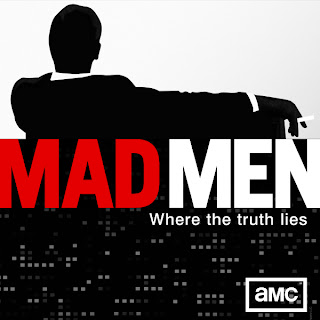 We know that ads can be sexy, but we never realized how sexy ad men could be until we met Don Draper. Usually by season three of most shows we’re getting bored with the same old thing. But we truly feel like the already acclaimed “Mad Men” is truly hitting it’s stride in season three and has never been better. We just can’t get enough of the cigarette smoke-filled, martini-soaked drama.

Yes, Don Draper is mmmm-mmmm good. And he certainly has come up with some great advertising campaigns. But is he the greatest TV ad executive in entertainment history? Take a look at our other favorite TV ad men and women and decide for yourself.


Mason and Conner on "Trust Me"
Nothing will rip up a creative partnership faster than a promotion, especially when one half of the team becomes the other half's boss. Such was the case on 2009's short-lived quirk-fest "Trust Me." We had high hopes for the show that starred the two title character dudes from "Will and Grace" and "Ed," and we quickly became attached to them in their new roles as Mason and Conner. But their character branding from their old shows was just a little too effective: viewers didn't seem to buy them as edgy ad men.

Donny Deutsch on "The Big Idea with Donny Deutsch"
Advertising is in Donny Deutsch's blood. The real-life ad exec-turned-talk show host's father founded Deutsch, Inc., and Donny ultimately became chairman of the small company, helping it grow into one of the top 10 ad agencies in the U.S., with such clients as Johnson & Johnson, DirecTV, and IKEA. So it's no wonder he found success on own his CNBC talk show, where he sold viewers on the "roadmap to the American Dream."

Lynette Scavo on "Desperate Housewives"
When "Housewives" premiered in 2004, Lynette Scavo was desperate to escape the stresses of raising four kids with a workaholic husband who was never home. So when she got a chance to go back to work at an ad agency in Season Two, she jumped at it. Only problem was that balancing a career and family proved to be a full-time job in and of itself. Still, that paled in comparison to what was to come for Lynette: a battle with Hodgkin's lymphoma, a cheating husband, and a family start-up.

Ned Dorsey on "Ned and Stacey"
Ned Dorsey's boss wanted to promote a married man (we can't explain the logic behind that one). Ned was so determined to move up at the agency that he fulfilled the requirement for promotion by marrying a stranger. She, of course, wed Ned because she needed a place to live and loved his apartment. Seriously, does anyone EVER do this kind of stuff in real life? A weak plot perhaps, but we've always had a soft spot for Thomas Haden Church, who played Ned in the midst of his very rocky career transition from sitcom stardom on "Wings" to his role in the acclaimed film "Sideways." He struggled through a series of really bad roles along the way, but now he's back on top.

Amanda Woodward on "Melrose Place"
We don't know if Amanda Woodward was any good at her job at D&D Advertising. We do know that she was insanely manipulative, seductive, and liked to wear really, really short skirts. The bottom line is that in the world of nighttime soaps, if you look like Heather Locklear, no one's likely to criticize your job performance.

Miles Drentell on "thirtysomething" and "Once and Again"
David Clennon's portrayal of sleazy ad man Miles Drentell was so compelling that TV producer Ed Zwick asked him to play the character on two different shows. Miles was introduced as Michael and Elliot's cut-throat, partnership-destroying boss at DAA on "thirtysomething" (you can see them in happier times on the recently released Shout! Factory DVD) and was resurrected as Rick and David's cut-throat, partnership-destroying client on "Once and Again."

Angela Bower on "Who's the Boss?"
Of course, ad exec Angela Bower needed some support at home. She was a single working woman, who was also trying to raise a son and wrangle a promiscuous mother. So Tony Micelli and his daughter, Sam, moved in. The extra help gave Angela the time she needed to start her own agency in Season Three and keep all the hungry sitcom mouths fed.

Henry Desmond and Kip Wilson on "Bosom Buddies"
Henry Desmond and Kip Wilson were best friends and creative partners, working for the often-credit stealing Ruth Dunbar at Livingston, Gentry, and Mishkin. But Henry, the copywriter, and Kip, the art director, were mysterious about what they did after work, because at night they dressed as women to get cheap rent at the Susan B. Anthony Hotel (and so Kip could be close to the beautiful Sonny Lumet). The talented boys struck out on their own in Season Two to form Sixty Seconds Street, with Ruth as a (kind of) silent partner and their buddy Amy at the reception desk.

Larry Tate and Darrin Stephens on "Bewitched"
Larry Tate and Darrin Stephens were ad men in the age of the two-martini lunch. Not the dark, angst-ridden world of "Mad Men," but the light-hearted, swinging-'60s, my-wife's-a-witch-and-no-one-notices sitcom world of "Bewitched." Larry was unfazed by the Dick York/Dick Sargent swap-out of his employee Darrin, probably because he found himself constantly having to explain away inexplicable occurrences. He may not have understood what was happening around him, but somehow he'd just plow through magic-riddled client meetings until he could get his hands on his next cocktail.