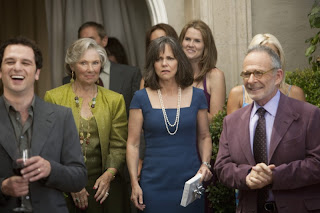 Every Sunday night we watch "Brothers and Sisters" and have our weekly cry for two reasons. One, because the show's emotional story lines always get us where it hurts. And two, because it makes us a little homesick for our own brother and sisters who live far away. Coming from such a close family, we've always been drawn to TV shows that revolve around siblings. And so, here's a look back at some of our favorites.


Donny and Marie Osmond on "Donny & Marie"
He was a little bit country. She was a little bit rock ’n’ roll. We were way into the real-life brother-and-sister team of Donny and Marie. The big white teeth. The groovy matching outfits. The purple socks. And, most importantly, the schmaltzy songs ("Paper Roses," indeed). What more could your average '70s suburban kids ask for in a TV show?

Ross and Monica Geller on "Friends"
Ross, Rachel, Chandler, Monica, Phoebe, and Joey were all so close it was hard sometimes to remember that the two Gellers were actually brother and sister. In fact, the siblings brought the whole crew together. And even during the most intense foosball and touch-football throw-downs, Monica and Ross truly proved that the family that plays together stays together.

Zan and Jayna (aka, the Wonder Twins) on "Super Friends"
Sure, they seemed like two average teenagers from Exxor with a pet space monkey (Gleek rocks!) and snazzy suits. But when Zan and Jayna touched rings and activated their Wonder Twin powers, anything was possible. Well, anything that involved water and an animal. Luckily for humanity, most super-villain plots could be thwarted with an ice cube and an elephant. Whoda thought?

Hilda and Betty Suarez on "Ugly Betty"
Two sisters couldn't be more different on the surface. Hilda is pretty and sexy, totally focused on looks and fashion. Betty is, well, ugly. And despite her job at Mode magazine, she could care less about trendy clothes and hairstyles. But what bonds the Suarez sisters is their deep connection to family and their love for each other.

Rhoda and Brenda Morgenstern on "Rhoda"
Rhoda Morgenstern was TV's ultimate pudgy, funny, single girl on "The Mary Tyler Moore Show." But when she got her own spinoff and had to slim down and get married, the future spinsters of America turned to her sister, Brenda, as their new poster girl. The only thing better than one less-pretty best friend with an attitude: two of them, especially sisters. Rhoda and Brenda helped THESE two sisters get through many a dark day.

Laura and Mary Ingalls on "Little House on the Prairie"
Life was tough on the prairie, and, frankly, there wasn't much fun stuff to do. You could listen to Pa play the fiddle, take a walk down to the creek, or hang at Oleson’s Mercantile if Nellie didn't get you down. But luckily for Laura and Mary Ingalls, they had each other, which was a real blessing, considering their only neighbors were miles away and their other two sisters (who we don't think even had names) weren't the most glowing conversationalists.

Wally and Theodore “Beaver” Cleaver on "Leave It to Beaver"
They were the quintessential TV brothers. Sure, they fought, and the Beaver had to put up with the likes of Eddie Haskell. But deep down, even when Wally and the Beav had beef, they were best friends who were still able to mess around. That's not too crummy.

Gob, Buster, and Michael Bluth on "Arrested Development"
Michael found brothers Gob and Buster pretty frustrating. After all, their bizarre antics made it even more difficult to keep his head straight and run the collapsing family business. But between Buster's affair with Lucille 2 and the loss of a hand to a run-in with a seal and Gob's shaky magic routines and Segue excursions, the Bluth brothers are the funniest TV siblings of all time.

Willie and Buddy Lawrence on "Family"
Willie Lawrence was a good big brother. He never teased his little sister, Buddy, and he stood by her as she blossomed into womanhood during some very special episodes. But the nicest thing about Willie? He never called Buddy by her real name, Letitia.

Christine Campbell and Matthew on "The New Adventures of Old Christine"
Christine and Matthew are siblings, roommates, and best friends. And they don't let silly things like being involved with the same woman get between them. They weren't even shaken by the fact that Matthew briefly dated Christine's best friend, Barb, and that Christine married Barb to keep her in the country. Clearly, their mother taught them how to share.

Written by Nancy & Amy Harrington
Originally for GetBack.com
Posted by Pop Culture Passionistas at 11:47 AM