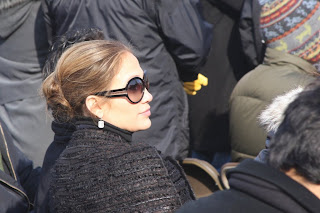 In a not so surprising shark jumping career move, Jennifer Lopez seems to be giving herself a new nickname… Lola. But you’d think the woman who fought so hard for so long to shake the monikers J.Lo and Bennifer, would take the more sophisticated route and not hang her hopes on another gimmick… let alone maybe try to record a good song worth listening to. But to some degree we guess it’s unavoidable, it seems like the biggest stars always have nicknames. Some use their Sasha Fierce aliases to rebrand themselves, while others come up with their own alternate identities they use when making reservations and checking into hotels. A lot of these names are pretty clever and funny, so we present to you -- and Lola -- some of our favorite celebrity nicknames and alleged aliases.


Ben Affleck and Jennifer Lopez
Before there was Brangelina or TomKat, there was Bennifer, J.Lo’s most paparazzi fueled alter ego. It's hard to remember when Ben Affleck and Jennifer Lopez were the "It" couple and the first to be bestowed with the combined celebrity nickname. They split, of course, and Lopez went on to marry singer Marc Anthony. Affleck happened to fall in love with another Jennifer -- Garner -- so he can still use "Bennifer" from time to time, if he feels like it.

Conan O’Brien
Conan O'Brien was just getting settled behind his brand-new desk on his second "Tonight Show" when very special guest Tom Hanks dubbed him "Coco Christopher," a play on O'Brien's first and middle name. Much to the host's chagrin, the nickname has stuck and audiences chant the moniker on a regular basis. Hoping to ditch the handle, Conan recently asked the king of nicknames, Snoop Dogg, to help him come up with something cooler. Snoop suggested that Coco simply add Loc at the end, but only after going on a confusing digression about the Cocoa Puffs cuckoo-bird pitchman (who, it seems, the rapper didn't realize was named Sonny) and something about Conan being crazy, or "Loc." So, Coco (with Loc, if you prefer) it is.

Snoop Dogg
Cordozar Calvin Broadus, Jr., was a little boy when his mother nicknamed him "Snoopy" because she thought he looked like Charlie Brown's beagle. When he became a rapper, he decided to go with the stage name Snoop Doggy Dogg (how could he not?) but shortened it to the more mature Snoop Dogg when he moved from Death Row to No Limit Records in 1996.

Courteney Cox
Conan isn't the only Coco in Hollywood. Former "Friends" star Courteney Cox has been called CeCe since she was a little girl, and her mother was known as Mama Coco. When husband David Arquette's family expressed concerns about naming their newborn daughter Courteney after her famous mom (a no-no in Jewish tradition), CeCe and David went with a compromise and named their little girl Coco.

Mariah Carey
Mariah Carey finally felt she'd come into her own and could finally be herself in 2005. So she released a new album, "The Emancipation of Mimi," exposing the longtime nickname that had only been used by her closest friends and family.

Kevin Federline
Britney Spears' husband, Kevin Federline, did not give himself the nickname "K-Fed," as some people suspect. In fact, he told MTV that he wasn't a fan of the moniker. Still, it must have seemed great in comparison to what he was called after his split from Brit: Fed-Ex.

Madonna
Madonna has been called many things during her 25-plus-year career, from the Material Girl to, well, the unprintable. But when she packed up and moved to England to be with her new love, Guy Ritchie, the British press dubbed her "Madge." The pop star reportedly didn't like the new name at first, until she learned that it was short for "Your Majesty." Not bad for a middle-class girl from Michigan.

LL Cool J
At 15, James Todd Smith had big visions for both his music career and love life. He knew he needed a stage name, and he must have thought he'd be a hit with the girls, so he came up with LL Cool J, which stood for Ladies Love Cool James. His music career took off just one year later, in 1984, when he was discovered by legendary record producer Rick Rubin. As for the ladies, at least one took a liking to him. He's been married to Simone Johnson since 1995.

Bruce Springsteen
It's pretty ironic that the icon of the blue-color working man is nicknamed "The Boss," and rumor has it that Bruce Springsteen didn't like it for years for that very reason. But he got the alias early in his career while working in clubs. He was the one who handled all his band's business dealings, collecting and handing out the hard-earned cash.

Sean Combs
Sean Combs has more nicknames than one guy should be allowed to have. His friends dubbed him Puffy when he was little because he would huff and puff when agitated. Then he became Puff Daddy, then P. Diddy, then Puff and Puffy (although he never recorded under the last two tags), and, finally, Diddy. Unless of course he's performing in New Zealand or the U.K. there he's still known as P. Diddy, after London-based DJ/producer Richard "Diddy" Dearlove slapped him with an unfair-competition lawsuit, claiming the hip-hop star's new nickname caused confusion with his own. What were the odds?

Kate Beckinsale
Kate Beckinsale just blurted out the check-in alias "Sigourney Beaver" one day when asked her name by a hotel clerk. She attributes it to her appreciation for fellow actress Sigourney Weaver.

Brad Pitt and Angelina Jolie
Since hooking up with Angelina, Brad Pitt really needs to be discreet while traveling, so rather than draw attention with their own names, Brad and Angie have been known to go incognito as Bryce and Jasmine Pilaf. When he's on his own he signs in as Carl Con Carne, while she prefers names like Miss Lollipop or Miss Manners.

Paris Hilton
Clearly, Paris Hilton must know her way around the hotel system, so she's savvy enough to check in under a pseudonym. But does she really believe she'll fly under the radar using the name of her beloved Chihuahua, Tinkerbell? Highly unlikely.

Johnny Depp
Eccentric actor Johnny Depp chooses highly conspicuous check-in names when he travels. His past noms de guerre have included Mr. Drip Noodle, Mr. Stench, and Mr. Oddpong. He says he likes to hear the bizarre aliases when he gets his early morning wake-up calls.

George Clooney
Clooney once had fun taunting hotel staff when he signed in as Arnold Schwarzenegger, forcing uncomfortable employees to refer to him by a name they clearly knew was not his.

Huey Lewis
Life on the road can be tedious for musicians, so they find ways to break things up and infuse a little humor. That's probably why Huey Lewis conceals his real identity and checks in as Jacques Strapp.


Written by Amy and Nancy Harrington
Originally for Getback.com
Posted by Pop Culture Passionistas at 11:42 AM