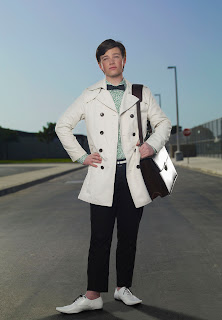 Today marks the 30th anniversary of the historic first March on Washington for gay rights. We've certainly come a long way since the late '70s, when Anita Bryant's anti-gay campaign and Harvey Milk's assassination sparked outrage and helped fuel the movement in support of gay civil rights. Same-sex marriage is now legal in several states, and even the "Newlywed Game" is now gay friendly, as George "Mr. Sulu" Takei and his partner, Brad Altman, take part as the first gay married couple to compete on the show.

While TV broadcasters can't take all the credit for the growing mainstream acceptance of gay marriage, they generally do consider how shows will play in Middle America. So we're taking a look at some of our favorite characters who've helped shape the portrayal of gays on TV. And we're not talking about the no-holds-barred, anything-goes world of cable — we're talking about the-censors-are-watching, prime-time network TV.


Kurt Hummel (Chris Colfer) on "Glee"
Kurt Hummel on "Glee" might possibly be our favorite gay TV character of all time. Maybe we're biased because we're such huge fans of the show, but we thought that Kurt's coming-out episode was a truly poignant TV moment. Kurt had joined the William McKinley High School football team so that his dad (played by Mike O'Malley) would think he was tough — but then he persuaded the whole team to perform Beyonce's "Single Ladies" during a game. After their underdog win, Kurt admitted he's gay to his dad, who replied, "I've known since you were three." In what is becoming a signature of the series, the tender scene between the two characters served to provide believable emotions amid the over-the-top musical productions.

Mitchell (Jesse Tyler Ferguson) and Cameron (Eric Stonestreet) on "Modern Family"
We admit it: "Modern Family's" Mitchell and Cameron don't do much to advance the breaking down of stereotypes, but they do make us laugh — a lot. Last week's trip to Costco, where snobby Mitchell discovered the glory of the super-sized, bargain-shopping mecca was hilarious. And we still giggle every time we think about the adorable baby with the two cream puffs. Although on the surface Mitchell and Cameron seem like cliches, they also have an understated, genuine quality in their relationship that keeps them from being gay caricatures.

Mark St. James (Michael Urie) on "Ugly Betty"
Over the course of three seasons on "Ugly Betty," Mark St. James has grown from being Mode editor Wilhelmina Slater's always loyal, constantly devious, and flamboyantly gay partner-in-crime to become Betty Suarez's sometimes tender, partially conflicted, flamboyantly gay co-worker with a heart. While on the exterior Mark and his cohort Amanda appear to be shallow and catty, always making fun of the fashion-challenged, in the last few seasons we've seen hints of Mark's compassion poking through — and we liked it. This dichotomy adds a level of reality to a potentially stereotypical character. We look forward to seeing what Mark has in store for Season 4.

Kevin Walker (Matthew Rhys) and Scotty Wandell (Luke Macfarlane) on "Brothers and Sisters"
2008 gave us network TV's first gay wedding between major characters in a drama series. Yes, there have been other gay TV weddings, but this time the commitment ceremony occurred between two main characters, not just series regulars who come and go. And Kevin and Scotty are the most realistic, natural gay couple ever to appear on network TV. They kiss, they hold hands, they sleep in the same bed — they're portrayed exactly the same way the straight couples on the series are. "Brothers and Sisters" is not a show about gay people or straight people. It's a show about family, and Kevin and Scotty take their roles well beyond all stereotypes seen in prime time until now.

Ellen Morgan (Ellen DeGeneres) on "Ellen"
Some still consider it the biggest milestone in gay TV history: Ellen DeGeneres came out of the closet, both in real-life and on her show "Ellen," as she became the first openly lesbian actress to play a gay woman on a sitcom. DeGeneres famously appeared on the cover of "Time" magazine under the headline, "Yup, I'm Gay," and then her character, also named Ellen, admitted to Laura Dern into an airport terminal microphone that she was gay. The episode drew criticism from conservative groups as well as sponsors, many of whom (including Chrysler, Mazda, Wendy's and JC Penney) withdrew their ads from the show. But we've been fans of Ellen's ever since.

Will Truman (Eric McCormack) and Jack McFarland (Sean Hayes) on "Will and Grace"
With Ellen paving the way, the nation was ready for a sitcom featuring an openly gay character (or two) at the forefront of the action. Enter Eric McCormack and Sean Hayes on "Will and Grace." Even though the show rarely included public displays of affection between men (Grace had numerous love interests, while Will and Jack had only a few during the show's eight seasons), the series made great strides in audience acceptance of gay story lines on mainstream TV.

Jack McPhee (Kerr Smith) on "Dawson's Creek"
In what is believed to be the first gay male kiss in a drama on a prime-time network series, Jack kissed his crush, Ethan (Adam Kaufman), on "Dawson's Creek." And although some complained it was more of a peck than a kiss, Jack redeemed himself the following season with a much more passionate lip-lock with Tobey (David Monahan). "Dawson's Creek" fans cheered, knowing the painful history Jack had facing his sexuality, beginning with his involuntary outing by an English teacher who made him read a private and very revealing poem aloud in class. It was one of the most gut-wrenching scenes ever in TV history, not just gay TV history.

Rickie Vasquez (Wilson Cruz) on "My So-Called Life"
1994's "My So-Called Life" probably captured the angst of high school better than any other TV show before or since, right down to Rickie, TV's first openly gay teenager. Rickie — who struggled with an abusive, unsupportive family, girls with crushes on him, and unrequited love — was not just the subject of a "very special episode" (as a gay kid would've been on most teen shows), but instead he was an integral part of the daily existence of the students at Liberty High.

C.J. Lamb (Amanda Donohoe) on "L.A. Law"
In 1991 "L.A. Law" took one small step for Amanda Donohoe and one giant leap for lesbian-kind when C.J. Lamb (Amanda Donohoe) kissed a very shocked and very straight Abby Perkins (Michele Greene) after helping her get a raise. The first lesbian kiss on prime-time TV did not go over well with advertisers, many of whom threatened to pull their commercials. But we were hooked and proud to be viewers of the groundbreaking show.

Jodie Dallas (Billy Crystal) on "Soap"
Jodie on "Soap" was the first openly gay character (in a supporting role) on a network series and TV's first gay dad. Billy Crystal played the cross-dresser who dated a pro football player and wanted a sex-change operation. Audiences were warming up to a role like this, but only to a point. Over the seasons, Jodie was portrayed more as a bisexual man, and eventually his character was linked romantically to women to get him just a little closer to viewers' comfort level.