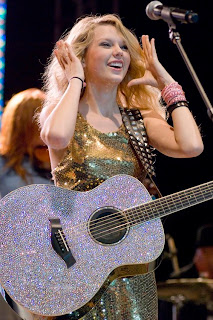 "Saturday Night Live" was on shaky ground for us last season. Once the post-election season kicked in, there wasn't a whole lot to laugh about on the late night show. But we were willing to go into a new year with an open mind.

So far the legendary sketch comedy show has been underwhelming due, in large part, to the less than stellar hosts that have been gracing the stage at 30 Rock. If Meagan Fox is the best pick you can make to start the season, clearly there’s some dubious casting choices a foot. And, even Drew Barrymore (who set the record last week as the woman who has hosted the most), didn’t have a single memorable moment.

Now there’s news that Taylor Swift has signed on for the November 7th episode. Oh boy. The obvious Kanye West joke aside, she doesn’t strike us as a treasure trove of comic gems and we find it impossible to believe that she's going to go down in history as one of "SNL's" best hosts ever. Wondering who does make that illustrious list? Well, here are our picks.
Steve Martin
Comedian and "Wild and Crazy Guy" Steve Martin is so ingrained in the fabric of "Saturday Night Live" that some people mistakenly believe he was once a Not-Ready-for-Prime-Time Player. Not true. But Steve has hosted "SNL" more than anyone else, 15 times so far. Aside from the Festrunk Brothers, Martin's memorable "SNL" moments include a sublime dance number with Gilda Radner and a fully costumed performance of his novelty song masterpiece, "King Tut." Don't think Steve's the best? Well, ex-cccuuuuuuusssssseeeeee us.

Alec Baldwin
Until we saw him on "Saturday Night Live" for the first time in 1990, we always thought of Alec Baldwin as the serious, handsome Jack Ryan he played in "Hunt for Red October." Sure, he'd been in some comedies, such as "Beetlejuice" and "Working Girl," but he wasn't particularly funny in those roles. At the real-life 30 Rock, he clearly found a place he could cut loose and let his inner comedian shine through. If you haven't seen him as Charles Nelson Reilly on "The Actor's Studio" skit with Will Farrell as James Lipton, prepare yourself. His performance is "scrumtrulescent."

Paul Simon
Singer-songwriter Paul Simon brought his low-key comedy stylings to "SNL" four times as host (he appeared seven more times as a musical guest). And while you might not remember many of the skits he was in, his one iconic moment makes him a must for any "SNL" host list. Dressed in a turkey suit, Simon started to sing his hit tune "Still Crazy After All These Years," only to storm off the set in disgrace and confront his dear friend and show creator, Lorne Michaels.

Christopher Walken
When we think of Christopher Walken and "SNL," we always think of these five words: "I gotta have more cowbell!" But in Walken's seven hosting slots, he's had some pretty great skits, including the Walken family reunion, in which the entire cast — black and white alike — did their best impressions of the edgy actor. CW hasn't appeared on the show since April of '08, and we're really hoping he shows up again before the year is out. We got a fever, and the only prescription is more Christopher Walken on "SNL."

Justin Timberlake
Justin Timberlake has hosted "SNL" three times, but there are so many hysterical skits in those shows that it seems like he's done the job more than Steve Martin. He's a riot on the comedy show, and we're not the only ones who think so. The Grammy-winning singer has actually received two Emmy awards for his "Saturday Night Live" turns. The first came in 2007 when he and "SNL" castmember Andy Samberg won an Outstanding Original Music and Lyrics statue for their Digital Short "D*&k in a Box." Earlier this month, he won another. This time, more than just his musical talents were recognized (although he was also nominated for writing "SNL's" "Motherlover" and "I Love Sports" from the ESPY awards), the pop star took home Emmy gold as Outstanding Guest Actor in a Comedy Series.

Buck Henry
Ten-time "SNL" host Buck Henry was a staple on the show between 1976 and 1980, making an annual tradition of MCing the final episode of each season. He also built a stable of recurring characters along the way. Among them were Howard the stunt coordinator; noogie master Todd DiLaMuca's father, Marshall; and creepy Uncle Roy. But it was in his most memorable role that Buck really took one for the comedy team. As the straight man to John Belushi's Samurai Futaba, Henry stood by as the unpredictable comedian wielded a real Samurai sword in skit after skit. In a 1976 sketch, Buck was struck by Belushi's blade in the Samurai Stockbroker's office. He didn't let the cut stop him. He did the rest of the show with a bandage on his head. Never ones to miss out on a joke, the whole cast joined in and did the rest of the episode with bandages on their heads, too.

Tom Hanks
Everybody loves Tom Hanks, and everybody loves Tom Hanks on "SNL." The eight-time host has created some of the show's most memorable moments. We'll never forget his turn as one of the skirt-chasing, head-bobbing Roxbury Boys or as Rachel Dratch's sweaty workout partner Teddy at Claremont Yoga Center. But his greatest contribution to "SNL" history had to be his portrayal of an Aerosmith roadie during their "Wayne's World" appearance. "Sibilance, sibilance."

Neil Patrick Harris
Neil Patrick Harris seems to be the man of the hour, following his tour de force hosting gig at this year's Emmy Awards. But we wonder if NPH would've had that shot if he hadn't hosted the Tonys. And we're pretty sure that he wouldn't have landed the Tony gig if not for his performance last season on "SNL." Proving that his years of experience on TV, films, and on Broadway have paid off, Neil Patrick showed versatility as he jumped from a "Today Show" skit to the "Doogie Howser" theme song digital short to Fran, the air traffic controller with the long fingernails. Now if we could get him and Justin Timberlake to cohost, it would be a flawless show.

Candice Bergen
Candice Bergen has cred in the "SNL" host world not only because she was the first woman to MC the show, but because she also was the first person of either gender to be asked back to do the gig a second time (just five weeks after her first appearance). And she was funny to boot — pitching an Instamatic camera that dispenses cheese slices instead of photos, hanging with a killer bee, and imploring fans to adopt John Belushi for the holidays because he had no place to go. Shades of Murphy Brown's comedic timing to come.

John Goodman
John Goodman has hosted "SNL" 12 times — including MCing the show once a season for 11 years in a row. The burly sitcom star immortalized a lot of roles, considering he was never a series regular. There was Pat Arnold, a Mike Ditka-obsessed fan of "Da Bears" (his part was originated by Mike Myers, but he took it over when Myers left the show, explaining the difference in appearance as weight gain). And, of course, there was his turn as "Mighty" Mack McTeer — John Belushi's "Blues Brothers" replacement — a part he would continue to play in live shows and in the film "Blues Brothers 2000." But his most infamous role had to be his appearances as Linda Tripp from the Monica Lewinsky scandal days.

Jon Hamm
Jon Hamm blazed his way onto the TV scene with 2007's hit drama "Mad Men." But the strikingly handsome actor proved there was humor tucked inside his buttoned-up, retro ad man when he took to the "SNL" stage in 2008. He left us wanting more with skits like Don Draper’s Guide to Picking Up Women and a commercial for Jon Hamm's John Ham ("the ham you can eat in the bathroom"). Soon after he dazzled us on "SNL," he had booked a gig as Tina Fey's boyfriend on "30 Rock."