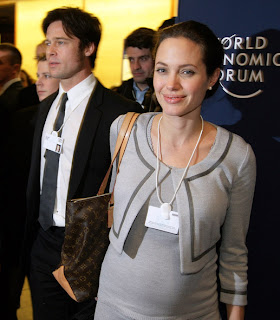 We were surprised to learn recently that almost 40 percent of the babies born in the U.S. in 2007 were delivered by unwed mothers. Frankly, we're bored with the lack of controversy. Celebrities like Angelina Jolie and Nicole Richie are making it acceptable to have kids out of wedlock. And just this week Jude Law's new baby (at least according to the DNA tests) was on the cover of Hello magazine. We miss the good old days of the scandalous celebrity love child. So we decided to relive some of the better baby-mama scandals of the past and present.

Mel Gibson and the Hitchhiker
Mel’s had a few rocky years, from the DUI arrest, to hanging with new BFF Britney Spears, to the latest news that his wife of 28 years has filed for a billion-dollar divorce and he's dating a 24-year-old Russian pop singer. Almost lost amid the flurry of tabloid goodies: a 29-year-old Australian woman came forward in 2006 to claim Mel was her real father. According to Carmel Sloane, the future Hollywood superstar, then an orange-juice factory worker, picked up her hitchhiking mother in 1976 and seduced her in his wagon. Carmel might never have gone after Mel if he was still making O.J. Down Under, but she seemed more than happy to pursue her famous celebrity "dad" to accept her as his own. Mel's reps said he has denied any knowledge of Sloane's mother or memory of the alleged fling.


Steven Tyler and the Model
Back in the '70s, model Bebe Buell had an on-again/off-again love affair with quirky rocker Todd Rundgren. While they were together, she had dalliances with other rock deities — David Bowie, Mick Jagger, and Steven Tyler among them — but she always remained with Todd. In July 1977, Bebe gave birth to a daughter, Liv Rundgren. But when nine-year-old Liv met Tyler's daughter, Mia, and noticed a resemblance, the truth came out. Liv was, in fact, Bebe and Steven's love child. Buell said she’d kept their daughter’s paternity secret because the Aerosmith vocalist was too addicted to drugs when Liv was born. But one quick look at those lips and no one could hide the truth.

Anna Nicole Smith and the Crazy Mob
After Smith's untimely death in 2007, guys were coming out of the woodwork to claim fatherhood of her illegitimate child, Dannielynn. Among the former suitors stepping up: Anna's attorney (and accused enabler) Howard K. Stern, who was listed as the dad on Dannielynn's birth certificate; Zsa Zsa Gabor's very unique husband, Prince Frédéric von Anhalt; and Anna's former personal trainer/chef/bodyguard, Alexander Denk. But the oddest person to step up to the baby-grabbing plate? O.J. Simpson. The Juice told documentary filmmaker Norm Pardo that HE might be the father of his "Naked Gunn 33 1/3: The Final Insult" co-star's little girl. Why all the love for the troubled star's bundle of joy? Could it be that Dannielynn stands to inherit Anna's piece of the $1.6 billion fortune of her deceased husband, J. Howard Marshall? What, too cynical?

Naveen Andrews and the College Student
"Lost" star Naveen Andrews had been dating Barbara Hershey for three years when they briefly separated in 2005. He started seeing an acting student, Elena Eustache. And although he originally denied he was her baby's father, DNA tests proved otherwise and a bloody custody battle ensued. With Hershey back by his side, Naveen was awarded sole custody. Seems Elena accused Naveen and Hershey of using witchcraft to influence the dispute and poison their child, so the courts thought maybe little Naveen Joshua would be better off in Dad's hands. Interestingly enough, it wasn't the actor’s first love child. When he was just 16, he fell in love with his 31-year-old math teacher and they had a son, Jaisal. And you thought things were weird on the island.

Heath Ledger and the Older Woman
Just two months after Heath Ledger’s death in 2008, a rumor circulated — thanks to press reports quoting the late actor’s family members — that as a 17-year-old, Ledger impregnated his then-25-year-old girlfriend and fathered a love child. Heath's uncle quickly stepped forward to say he’d been misquoted, and the woman’s current husband vehemently denied the story. The mother, he said, would be happy to submit her kid to a DNA test so they could put the whole mess behind them. And that was the end of that.

Eddie Murphy and the Spice Girl
Eddie Murphy sure is a hopeless romantic — his late-night run-in with that call girl/guy, the two-week marriage to Tracey Edmonds, and a split from his then-pregnant girlfriend, Mel B. Eddie and the former Spice Girl had been dating for seven months when they had a very public breakup. Eddie allegedly told the host of the Dutch TV show "RTL Boulevard" that he wouldn't know her child’s paternity until after a blood test. Well, that happened, and Eddie was officially declared the father. SURPRISE! As of 2008, Eddie still hadn't met his baby girl, Angel, but he has a reason. He believes he was tricked into having a baby. So he's waiting until Angel is 18 and he can see her without interference. If Eddie made a movie with a plot that good, he'd have another hit on his hands.

Robin Gibb and the Housekeeper
Who'd have thought the baby-bird-like Robin Gibb would be able to land one woman, let alone wind up in a love-child love triangle? But it turns out that the Bee Gee had a little fling with a live-in housekeeper, which resulted in the birth of Snow Evelyn Robin Juliet Gibb. The weirdest part: Robin and his wife, Dwina (a former Druid priestess), had an open relationship, so Robin was free to do pretty much whatever he wanted with whomever he wanted without bumming her out. Almost anything. Dwina wasn't thrilled when she got the proverbial baby announcement.

Steve Bing, the Super Model, and the Mogul's Wife
We image it would be hard to get over Hugh Grant (humiliating prostitution bust and all), especially after being with him for 13 years. So when Grant and Elizabeth Hurley split in 2000, it's not surprising that she picked a dashing rebound guy with a lot of cash: producer Steven Bing. But when Hurley got pregnant in 2001 and named Bing as the father, he quickly distanced himself, claiming they hadn’t been exclusive and therefore, he wasn't necessarily the daddy. That same year entertainment mogul Kirk Kerkorian hired a private investigator, the now-infamous Anthony Pellicano, who dug around Bing's trash for his dental floss — this time to prove that Bing was also the father of Kirk's ex-wife (from a 28-day marriage) Lisa Bonder’s baby. DNA was not Bing's friend. Tests showed he’d fathered both Hurley's boy, Damian Charles, and Bonder's daughter, Kira Rose.

Gavin Rossdale and His Best Friend
Gwen Stefani is one of those girls we wish we could hate. She's pretty, she's talented, and she has a hot husband. Still, we can't help but like her. So we felt badly when we heard that her fairy-tale romance had an emerging dark secret. Seems when her husband, Gavin Rossdale of the rock band Bush, was 23, he had a fling with his friend, Pearl Lowe. She had a boyfriend at the time, so when she became pregnant, she assumed the baby belonged to her dietician beau and asked Gavin to be the godfather. But as the little girl, Daisy, matured, she didn't seem to have any of the dietician's characteristics. However, she did seem to share some similarities with Gavin. So a paternity test was done. Even Pearl was shocked that Gavin wasn’t JUST her daughter's godfather. There was probably a lot of hollering back in the Stefani/Rossdale house when that news broke.

Michael Lohan and the Other Woman
Sometimes you have to wonder how Hollywood kids can go so far astray. Is it the fame? Is it the money? Well, in some cases, it seems to simply be the gene pool. Clearly, Lindsay Lohan started at a major disadvantage with a dad like Michael. But even Lindsay was surprised in 2008 when she learned her dad had a 13-year-old love child. She was so shocked she felt the need to blog about the alleged infidelity on her MySpace page. Not surprisingly, Lindsay's had some very public relationship problems of her own lately. Looks like Sam Ronson might have dodged a major bullet.

Written by Amy & Nancy Harrington
Originally for GetBack.com
Posted by Pop Culture Passionistas at 10:04 AM