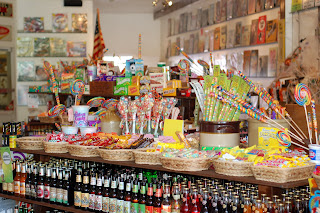 We recently discovered a new store called Rocket Fizz. It sells a trillion (pretty sure that's an exact inventory) different kinds of soda pops like root beers and saraaparillas. While that's cool, we're not really fancy beverage girls. What we do totally love, though, is candy. And the first time we walked into Rocket Fizz, we thought we had been transported back in time to the summer we spent at a lake cottage and had to take a boat to the local store. Inside they had hundreds of kinds of penny candy. And so does Rocket Fizz. Although it costs a little more than a penny, it's still a considerably cheap thrill to buy a candy necklace or some wax lips and relive a little yesteryear.

Rocket Fizz currently has four locations (Camarillo, California; Burbank, California; Lincoln, Nebraska; and Las Vegas, Nevada). But if you're not lucky enough to live near any of them, here are some other places to buy yourself a nostalgic sugar rush.