Stars Who Got Their Start in Horror Movies 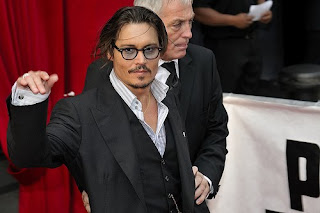 It's that time of year when little witches and goblins ring our doorbells for free candy and every creak we hear in the night freaks us out just a little bit more than usual. True, we're easily spooked. That's why we'll be watching "Celebrity Ghost Stories" during the day on Sunday.

But you know what's really scary? Some of the career choices that now mega-stars were forced to make in their early acting days. It's hard to remember a time before Johnny Depp was Johnny Depp. But back in the day, Captain Jack Sparrow had to take a job in "A Nightmare On Elm Street." Check out Johnny and some of the other stars who started in cheesy horror flicks before they became household names.

Another "Nightmare" alum, Johnny Depp has gone on to be one of Hollywood's biggest stars. Johnny debuted in the first film of the "Nightmare" series, playing one of Freddy Krueger's victims. "Elm Street" led to "Jump Street" and teen idol status for Johnny. When the series ended, Depp vowed to pursue a career based on rich characters and meaningful scripts, like "Cry-Baby," "Ed Wood" and "Edward Scissorhands" — and left the "Tiger Beat" magazine world behind. But as hard as he tried, he was destined for mainstream commercial success with the "Pirates Of The Caribbean" series. Johnny became a superstar, but on his own terms.

Before she was sleeping with a dead guy on "Grey's Anatomy," before she wore 27 bridesmaid dresses, and before she got "Knocked Up," Katherine Heigl got her big break as Jade in "The Bride of Chucky." It was not her first film, but it did lead to her work on the sci-fi TV drama "Roswell," which opened the door to her current role as Dr. Izzie Stevens. Rumors keep swirling that Heigl is leaving the show, but "Grey's" producers insist she's sticking around. Maybe if they add an animatronic killer doll as her next love interest she'll be compelled to stay.

By 1993 Jennifer Anniston had done some bad TV shows (namely "Molloy" and the short-lived "Ferris Bueller," based on the hit movie), but her first film, "Leprechaun," was so horribly panned by the critics that Jen considered walking away from show biz. Then she got an audition for a sitcom called "Friends," and the rest is Hollywood history. In her pot of gold: ten years on a top-rated show, one of the highest-paying TV gigs ever, a few Emmy nominations and one win, a lucky ticket to some choice movie roles, and a famous husband (oh well, you can't win 'em all).

This was Patricia Arquette's very first acting gig. Not a bad way to break into the business — the lead role in a successful horror franchise. She has worked consistently through the years in such films as Flirting With Disaster" and "Ed Wood," but major success has always eluded her. Until now. Check her out on the NBC hit "Medium." Looks like she's at her best right where she started — in scary stories from beyond the grave.

The same year Tom Hanks landed the role of Kip/Buffy Wilson on ABC's "Bosom Buddies," he made his acting debut with a bit part in the horror flick "He Knows When You're Alone." We're guessing the TV hit had a little more to do with Hanks' hugely successful movie career than the part of a guy whose engaged friend is stalked by a serial killer who only targets brides. Doesn't sound like a character that gave him insight into the future roles of "Forrest Gump" or Andrew Beckett in "Philadelphia," but you never know what past experiences an actor draws from for his "craft."

From 1978 to 1982, Jamie Lee Curtis starred in seven horror movies, earning her the title of film's Scream Queen. She debuted in one of the most beloved horror movies of all time, the original "Halloween," as Michael Myers stalkee. Then came "The Fog," "Prom Night," "Terror Train," and a few "Halloween" sequels. But starting in 1983, Jamie Lee had a string of hits ("Trading Places," "A Fish Called Wanda," "Dominick and Eugene") that proved she could be far more than a slasher film star. Still, horror is in her blood (after all her mom, Janet Leigh, was the "Psycho" shower victim), and she reprised the role of Laurie Strode in 1998's "Halloween H20: 20 Years Later" and 2002's "Halloween: Resurrection." These days she spends most of her time writing kids books and selling Activia (just a tiny bit horrifying, really).

The same year Paul Rudd had his break-out role in "Clueless" he also appeared in "Halloween: The Curse of Michael Myers." He had been acting in the TV series "Sisters" for a few seasons in a recurring role, but the two films put Rudd on the map. Still, for the next nine years Rudd only landed bit parts, usually as the "best buddy." Then NBC's "Friends" cast him as Phoebe's fiancé/husband, the lovable Mike Hannigan. This prime-time role led to a string of comedies in which Paul was FINALLY cast as... the lovable best buddy. At least now he's playing not-the-leading-man in front of bigger audiences in such films as "Anchorman: The Legend of Ron Burgundy," "The 40 Year Old Virgin," and "Role Models."

OK, sure, Kevin Bacon's film debut was "Animal House" in 1978. But, for the next two years the offers were not exactly pouring in. Then along came "Friday the 13th," and he was on a roll. "Diner." "Footloose." "She's Having A Baby." Bacon revisits the horror/suspense genre periodically with great films like "Tremors," "The River Wild," and "Stir of Echoes," but his most scary role to date? Singer/guitar player in The Bacon Brothers. We're very, very frightened. Are you scared? You should be scared.

Josh Hartnett was born the year the first "Halloween" movie was released. So it seems fitting he got his start in the franchise. "Halloween H20" was his first film role, playing the son of Jamie Lee Curtis' Laurie Strode. And though his character John Tate does a lot of looking over his shoulder for Michael Myers, Josh has never looked back. Films like "Pearl Harbor," "Black Hawk Down," and "The Black Dahlia" have earned him a spot as a Hollywood leading man... and all at the tender age of 30. Are there more horror movies in his future or was he just "entitled to one good scare"?

By 1994 Reneé made some TV appearances and had some very small film roles, but it was her lead in "Texas Chainsaw Massacre: The Next Generation" that was career-changing. Her costar Matthew McConaughey told her about another film, "Love and a .45," which led to another — "The Whole Wide World" — that was seen by director Cameron Crowe, who offered her a part in "Jerry Maguire." She beat out established stars Cameron Diaz, Winona Ryder, and Marisa Tomei for the part of Tom Cruise's single-mom love interest. Reneé has steered clear of the horror genre since then, but we think she owes a little bit of gratitude to Leatherface and the clan.

Posted by Pop Culture Passionistas at 10:32 AM