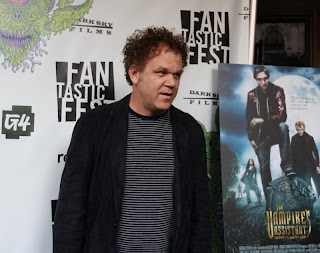 Halloween’s just a few days away, and the latest vampire movie "Cirque Du Freak: The Vampire's Assistant" hits theaters today. And while we are big fans of the fanged creatures, even we have possibly hit our threshold for the night stalkers. Still, we couldn’t resist sitting down with a glass of red wine and sinking our teeth into some great vampire flicks. Here’s our list of the top 20 bloodsuckers, past and present:


20. Nicolas Cage in "Vampire’s Kiss"
This is the least creepy Cage has ever been onscreen. If you want Nic to freak you out this Halloween, you’re better off renting The Weather Man or the video from his wedding to Lisa Marie Presley.

19. James Marsters in "Buffy the Vampire Slayer"
This vampire was so smooth he turned his archenemy, Buffy the (TV) vampire slayer, into his girlfriend. That doesn’t suck.

18. Eddie Murpy in "Vampire in Brooklyn"
Many consider this the movie the put the nail in Eddie Murphy’s career coffin (pun intended), but if you’re looking for a good guilty-pleasure-vampire-action-comedy, this is definitely the way to go.

17. Jim Carrey in "Once Bitten"
Carrey narrowly escapes the clutches of a vampire cougar played by Lauren Hutton. Sure, it set his career back a few years, but it’s a great rainy Saturday afternoon movie.

16. Richard Lawson in "Scream Blacula Scream"
This sequel to the 1972 blaxplotation film Blacula features a vampire in a rainbow wig. Run, don’t walk, to the video store.

15. Gary Oldman in "Bram Stroker’s Dracula"
Seems like Oldman was born to play the caped count — seductive in an intensely creepy way.

14. Leslie Nielsen in "Dracula: Dead and Loving It"
Mel Brooks tried to do for Dracula what he did for the monster’s creator in Young Frankenstein, and while it wasn’t even close to being as good, Leslie Nielsen plays the batty vampire. How could that not be worth watching?

13. Paul Reubens in "Buffy the Vampire Slayer"
His arrest for indecent exposure a year earlier just made Pee-Wee’s 1992 movie vampire all the more edgy.

12. Reggie Nalder in "Salem’s Lot"
The BEST cheesy vampire movie ever! Stephen King and Lance Kerwin (that’s James At 15, 15, 16 to you). Glowing red eyes. Greenish gray skin. Fangs in the middle of the mouth rather than off to the side. Nice twist.

11. Tom Cruise in "Interview with the Vampire: The Vampire Chronicles"
Imagine Tom Cruise sucking the life force out of you. It happened to Brad Pitt in this film, and it seems to be happening to Katie Holmes now. Very scary, indeed.

10. Bela Lugosi in "Dracula" (1931)
The grandfather of all bloodsuckers. It would be criminal to list the best and not mention Bela. He will always be the vampire king.

9. Martin Landau in "Ed Wood"
OK, so Martin Landau is only playing the guy who played Dracula, but Ed Wood is such a great movie and we love him so much he had to make the cut.

8. Willem Dafoe in "Shadow of the Vampire"
While we’re at it, this is another movie about a dude playing a dude who plays a vampire. The most shocking thing about the movie: Willem Dafoe actually had to wear make-up for the part despite his normally sunken features and jagged teeth.

7. Robert Pattinson in "Twilight"
We admit, with all the hype last year before the cult teen vampire story hit the screens, we took our time going to see it. But as soon as we did, we went to the dark side and we're counting the says until " The Twilight Saga: New Moon" (28 if you want to join us).

5. Chris Sarandon in "Fright Night"
The very suave Sarandon attempts to seduce a very naïve teenage girl with a really dorky boyfriend (Brreewwwster), all while Roddy McDowall is hunting him down. Our favorite fang-in-cheek ’80s comedy by far.

4. David Bowie in "The Hunger"
Chris Sarandon’s ex-wife, Susan, stars in this modern urban vampire tale. David Bowie plays a young clubbing vamp who is suddenly tossed aside by his dark mistress and ages rapidly. Seems like the real-life Bowie is still playing vampire games — he looks just as young now as he did in 1983.

3. Kiefer Sutherland in "The Lost Boys"
Teen angst turns deadly when Kiefer gets thirsty in this double-Corey (Haim and Feldman) classic.

2. Frank Langella in "Dracula" (1979)
We think it was his eyes that made Langella the most captivating cat from Transylvania. Dating Whoopi Goldberg in the late ’90s sucked a little bit of the sexy out of his veins, but try to block that from your memory and give Frank a chance.

1. Stephen Moyer in "True Blood"
Just when we were about ready to give up on the tired old blood-sucking genre, this guy swoops in with vampire speed. Pale, brooding, sunken-cheeked. Yummy. And he’s really nice to his human girlfriend. Exactly the kind of vampire a girl dreams of meeting.

Written by Amy & Nancy Harrington
Originally for GetBack.com
Posted by Pop Culture Passionistas at 10:03 AM