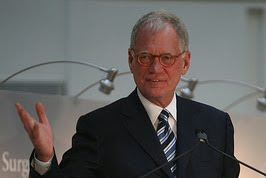 Last night marked one of the oddest moments in David Letterman's long TV history. If we thought Joaquin Phoneix and Andy Kaufman set a bizarre tone, nothing prepared us for Dave's long and detailed tale of extortion and intra-office promiscuity that led to grand larceny charges against CBS employee, Robert J. Halderman. The latest odd "Late Night" moment for sure but certainly not the only. We just couldn't resist creating a list of the "Top Ten Most Insane Letterman Interview Moments."


10. Demi Moore - November 8, 1995
Six months before Demi Moore's Razzie Award-winning film "Striptease" was released, the star did a different stripping act... on Letterman. To help Dave present the "Top Ten Least Popular Stripper Names‚" she came out in a skimpy outfit made out of Dave's blue index cards. One by one, she stripped off the cards as the Top Ten were revealed, until she was left in just her bikini. Our favorite names? "Ginger Vitis," "Stripper Gore," and "Mrs. Charlie Sheen."

9. Cybill Shepherd - May 7, 1986
One week before Cybill Shepherd was scheduled to appear on "Late Night With David Letterman," the dress she planned to wear arrived at the studio. Dave used the gown as a gag to promote the spot. Good sport that she is, Cybill took the joke one step further; when she arrived to do her segment, she skipped the dress and came out in just a towel. But have no fear, it was a designer towel for the fashion icon!

8. Drew Barrymore - April 12, 1995
In what we're guessing might be one of Dave's favorite interviews ever, Drew Barrymore came on Letterman's show as part of her comeback tour. Partying at Studio 54, drugs, and rehab were behind her. She'd posed for Playboy and was getting rave reviews for "Boys on the Side." Then, after discovering it was Dave's birthday, she gave him a little impromptu birthday present. She hopped up on his desk, did a sexy little dance, turned her back to the camera, and pulled a "Girls Gone Wild" breast flash. Dave could not have been more delighted.

7. Madonna - March 31, 1994
If the FCC freaked out about Janet Jackson's Super Bowl wardrobe malfunction, we can only imagine how they were feeling on March 31, 1994. That night, Madonna appeared on the "Late Show With David Letterman" and uttered the F-word 13 times (she threw in a bunch of other four-letter bombs and Beevis & Butthead-level double entendres too). The episode still holds the record for being the most censored in American network talk-show history. Her excuse for her poor manners: she was making a statement about censorship. Madge, it's only a statement if people get what you're saying. To show there were no hard feelings, Madonna and Letterman reunited five months later, when he escorted her onstage during the MTV Video Music Awards.

6. Andy Kaufman - July 28, 1982
Talk show hosting can be dangerous business, a lesson Dave learned during a 1982 interview with unpredictable stand-up comedian Andy Kaufman and pro-wrestler Jerry Lawler. Months earlier, Andy had been injured when he entered the ring with Lawler. He was the first man Andy had taken on after going head-to-head with women and becoming the self-proclaimed "Inter-Gender Wrestling Champion." Kaufman was on "Late Night" demanding an apology and wearing a brace to protect the broken neck he had suffered from the Lawler pile-driver five months earlier. After an escalating exchange of quips, Lawler slapped Kaufman in the face and knocked him out of his chair. After the break, Andy went into a frenzy, screaming four-letter words, jumping up and down like an angry chimp, and slamming his hands on Dave's desk before throwing a cup of coffee in Lawler's face. A theory surfaced that the two men were actually friends, staging the smack-down as an elaborate publicity stunt. The question remained unanswered for years after Andy's death, but the theory was confirmed in the Kaufman biopic "Man on the Moon," when Lawler played himself and reenacted the hoax.

5. Rod Blagojevich - February 3, 2009
When former Illinois Governor Rod Blagojevich appeared on "Late Show with David Letterman" to defend himself against accusations of bribery, Dave went for the jugular. He started with the oh-so-welcoming question, "Why exactly are you here?" In answer to G-Rod's response, "I've been wanting to be on in the worst way," Letterman replied, "Well, you're on in the worst way, believe me." Throughout the interview, Blagojevich seemed strangely happy, telling really bad prepared jokes and acting like he was there to promote an upcoming movie, even setting up an alleged bribery conversation audio clip. Dave showed no mercy, asking repeated questions about Blago's guilt, the impending criminal charges, and whether or not he shampooed AND conditioned his hair. More seasoned journalists had hammered on the fallen Governor for days, but no one revealed the level of his insanity to the degree that Dave did.

4. Cher - May 22, 1986
After waiting four years to land her as a guest, David Letterman finally welcomed Cher to "Late Night with David Letterman" on May 22, 1986. But why had it taken her so long to chat with the talk-show star? Because, as she so eloquently put it, she thought he was an "a$$hole." So what made Cher change her mind? She wanted the show to pick up her expensive NYC hotel tab. They didn't cover the whole bill, but they probably shelled out enough cash to take care of the mini-bar charges. Cher clearly warmed to Dave during the interview and must have had a good time. She returned to the show the following year, reuniting with ex-husband Sonny Bono for their first public appearance together in eight years.

3. Farrah Fawcett - June 5, 1997
After appearing on the cover of Playboy in 1997, Farrah went to visit Dave. What transpired was a less-than-coherent interview. When Dave asked her why she had a difficult time getting to the show, she said it was because of "the people... lots of people." Then she went on to describe an incident with fans, involving a wall and a thing in Central Park. When she finally remembered the term "embankment... a very high embankment," we started to wonder who else was very high.

2. Joaquin Phoenix - February 11, 2009
The gloves were off when Joaquin Phoenix appeared this week on "The Late Show" to promote his new film, "Two Lovers." Dave landed his first punch by making fun of Phoenix's beard. Then he pummeled him with comments like, "What can you tell us about your days with the Unabomber" and "Joaquin, I'm sorry you couldn't be here tonight." Phoenix gave one-word responses to questions and fidgeted uncomfortably from behind rock star shades, ultimately sticking his gum under Dave's desk, while the audience succumbed to bouts of nervous laughter. It wasn't the first time Joaquin had acted odd on Letterman -- he made another painfully awkward appearance in 2000 to promote "The Yards" as well. Still, this time around he seemed even more out of it. Were we witnessing an actor in the middle of a nervous breakdown? Was Phoenix high on some drug that clearly no man should be taking? Or was it all part of an elaborate prank: the rumored mocumentary directed by brother-in-law Casey Affleck to document Phoenix's fake move from acting to hip-hop music? We're predicting it's a combination of the three.

1. Crispin Glover - July 28, 1987
In 1987 Crispin Glover, previously best known as George McFly in "Back to the Future," went on "Late Night with David Letterman" dressed in striped, high-water bell-bottoms; platform shoes; and a long-haired, scraggly, crooked wig. His appearance and excited, nonsensical stammering gave the impression he might just possibly have taken an illicit substance. He ranted about the press trying to make him "sound weird" (doesn't seem like he needed much help there). And then he tried to arm wrestle Dave and came close to karate-kicking him in the head. In a highly unusual move, Dave walked off the set, and after a commercial break called Glover a "goofball and a dork." Not pretty. Glover later claimed he was developing a character for the yet-to-be-filmed "Rubin and Ed" (1991). In fact, his character, Rubin Farr, wears the EXACT same costume in the movie and karate-kicks at the drop of a hat. Hopped up on something or true artistry at work? You be the judge.


Written by Amy & Nancy Harrington
Originally written for GetBack.com
Posted by Pop Culture Passionistas at 10:54 AM