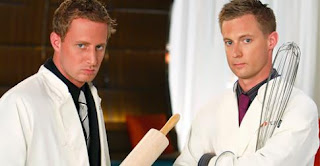 As sisters, we're especially interested to watch the "Top Chef" competition dynamic unfold between brothers Michael and Bryan Voltaggio — or as we like to call them, the High-Voltage Chefs — who've been the clear front-runners since Day One. Between them, they've won six of the 11 elimination challenges (three each). Michael has been in the top group nine times, and Bryan seven. And of the two, only Michael has fallen into the bottom three on one occasion.

But their lack of support for each other in the kitchen is obvious. Every time one of them wins a challenge, the other is clearly more disappointed with himself for losing than he is happy for his brother's victory. Will their sibling rivalry get the best of them or will the friendly competition drive them right over the finish line?


The Voltaggios have that age-old Lennon-McCartney thing going. Put two geniuses together, and they will constantly push the other to be better. Bryan (the elder, at 33) started cooking first. When Michael was 15, he got a job in the restaurant where his older brother was already a sous chef. In a "Top Chef" video diary, he said that "the competition started on that day."

Seems little bro spent quite a while standing in his sibling's shadow, and now he's finally coming out from behind. It also might explain his egotistical, arrogant, "I'm the best chef on the planet" attitude. He's been nothing but condescending toward his opponents (except for that one out-of-character moment when he split his $10,000 prize with his whole team). That episode, which Tom Colicchio called the "best restaurant war restaurant [challenge] we've had in six seasons," proved the power of the pair when they team up and work together: unstoppable.

This week, once again, the brothers dominated. As usual, they didn't win the breakfast-in-bed for Padma and Nigella Lawson Quickfire (Bryan ended up in the bottom two for his vanilla-drenched four-minute egg). But they fought back hard in the elimination challenge. Bryan's Mandalay Bay shark reef-inspired halibut and Michaels' tribute to the New York firefighters, a reworking of the traditional spicy buffalo wings, put them both in the top three one more time.

If neither of the brothers wins Season 6, it could be the biggest upset in "TC" history. Kevin is the only opponent who's giving them a run for their money. In fact, Kevin has won more Elimination Challenges than the brothers individually (four to date), and he's also won four Quickfires. We think last night's judges' table was a foreshadowing of what we'll see at the finals: Bryan, Michael, and Kevin, standing side by side to hear the ultimate verdict. If the final challenge involves pork, Kevin just might kick some Voltaggio butt.