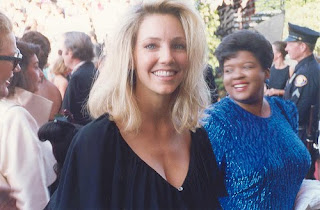 It's a great time to be a fan of nighttime soap operas. First the CW rolled out a new version of "90210," and then they launched a reimagining of "Melrose Place." Both shows are really bad, but like the originals, that's what makes them so good. We loved the mix of old and new on "90210," with original castmates Jennie Garth, Shannen Doherty, and soon Tori Spelling walking the halls of West Beverly High. And were thrilled that alumni like Laura Leighton, Thomas Calabro, and Josie Bissett were moving their boxes back in to the poolside apartments on "Melrose Place" - even if they weren't signing three year leases. See who's already moved in (and out) and who's due to fill a vacancy in our "Melrose Place:" Then and Now.

Heather Locklear as Amanda Woodward (1993-1999): Then
Heather Locklear was already producer Aaron Spelling's "good-luck charm" when he cast her as Amanda Woodward in "Melrose Place," having previously appeared in his hit shows "T.J. Hooker" and "Dynasty." Amanda got lucky as well -- a lot, in fact -- on "MP," as she jumped from man to man. But her greatest love affair, by far, was with Dr. Peter Burns, played by Jack Wagner.

Heather Locklear: Now
After leaving "Melrose Place," Heather went on to have another hit TV series, "Spin City," and star in the short-lived show "LAX." But she's become more famous in recent years for her own real-life soap opera. After she and husband Richie Sambora split, he dated her former friend Denise Richards, who had been married to her former "Spin City" costar Charlie Sheen. Heather then dated David Spade, but that didn't last, and she ended up in the arms of former "MP" lover Jack Wagner. Tonight marks Heather's return to "Melrose" - can she work her TV magic and save the fledgling show?


Thomas Calabro as Michael Mancini (1992-1999): Then
Thomas Calabro had been doing bit parts on TV for a few years and even had the lead in the short-lived series "Dream Street" when he joined the cast of "Melrose Place" as Michael Mancini. Calabro was the only member of the "MP" cast to stick with the show for its entire run, and who could blame him? Sure, he started off as the nicest guy in the apartment complex, but he became quite the villain -- manipulating Jane, marrying her sister, getting all wrapped up with that crazy Dr. Kimberly. Juicy stuff.

Thomas Calabro: Now
Calabro never quite rebounded from playing the despicable Michael Mancini. Since leaving the show, he's made guest appearances on such series as "Nip/Tuck" and "Greek," but he hasn't had that post-"Place" breakout role -- which made him incredibly available for the "Place" reboot and gave him the chance to be the only actor to appear in all seasons of both shows. He's still wickedly good as the conniving Michael.


Marcia Cross as Kimberly Shaw (1992-1997): Then
Marcia Cross was fresh off a run on "Knots Landing" when she was cast in "Melrose Place." She was only supposed to be on for one season, but she was so popular in the role of psychotic Dr. Kimberly Shaw that producers asked her to stick around. She stayed on the show for six seasons.

Marcia Cross: Now
Along with former "Melrose Place" costar Doug Savant, Marcia joined the cast of "Desperate Housewives" in 2004. While her character, Bree Van de Camp, is way less crazy and way more buttoned-up then Dr. Kimberly, she still manages to get wrapped up in the occasional murder mystery and extramarital affair.


Grant Show as Jake Hanson (1992-1997): Then
Grant Show had been working steadily on TV, appearing on "The Love Boat," soap opera "Ryan's Hope," and the "After School Special: Cindy Eller: A Modern Fairy Tale," when Aaron Spelling cast him as Jake Hanson. Jake first appeared as the object of Kelly Taylor's affections on "Beverly Hills, 90210," and the rest is spin-off history.

Grant Show: Now
After "Melrose Place" Grant Show continued to pop up on TV, making regular guest appearances on "Six Feet Under" and "Dirt." But he finally returned to leading-man status when he was cast as the airline pilot with an open marriage in 2008's "Swingtown." Sadly, the show didn't last long, but Grant's still going strong. Last season he had a recurring role on "Private Practice" and now he's Jenna Elfman's sleazy ex on the sitcom "Accidentally On Purpose."

Courtney Thorne-Smith: Now
After leaving "Melrose Place" Courtney Thorne-Smith joined the hit show "Ally McBeal." But the pressure of staying thin (in a cast that included Calista Flockhart and Portia de Rossi) was too much for her. Choosing health over fame, she left the show, landing a job with a much more robust costar: Jim Belushi, on "According to Jim."


Doug Savant as Matt Fielding (1992-1997): Then
"Melrose Place" was Doug Savant's big break in TV (unless you consider a random episode of "The Facts of Life" or "Jake and the Fatman" a big break). But Savant's Matt Fielding, one of TV's first openly gay lead characters, didn't get to have as much fun as his apartment-dwelling neighbors. While Matt had his share of relationships, he missed out on the steamy soap drama that Amanda, Jake, and Michael enjoyed.

Doug Savant: Now
After leaving the apartment on "Melrose Place," Doug Savant married former costar Laura Leighton (who had been linked to their "MP" castmate Grant Show before marrying Savant). He worked his way through the network TV circuit, appearing in "JAG" and "24" before he moved into a new home on Wisteria Lane. Doug plays Felicity Huffman's ex- ad exec, ex-pizza-making, current college student husband, Tom Scavo, on "Desperate Housewives."


Josie Bissett as Jane Mancini (1992-1997, 1998-1999): Then
Josie Bissett was fresh off the Valerie Harper/Jason Bateman sitcom "Valerie" (aka "The Hogan Family"), when she was cast as Jane Andrews Mancini. The same year she joined "MP" as the resident married good girl, she wed actor Rob Estes in real life. Estes would join the MP cast the following year playing restaurateur Kyle McBride.

Josie Bissett: Now
Josie took a break from acting after "Melrose Place" and turned her attention to raising a family and writing the parenting books "Making Memories" and "Little Bits of Wisdom: A Collection of Tips and Advice from Real Parents." On the heels of her divorce from fellow "MP" alum Rob Estes, she went back to TV, starring as Kathleen Bowman in "The Secret Life of the American Teenager." Her turn as Jane on the new "MP" left us wanting to see more of Bissett on the prime time soap.


Daphne Zuniga as Jo Reynolds (1992-1997): Then
When she joined "Melrose Place" in 1992, Daphne Zuniga was a movie star who'd played opposite some of the '80s hottest leading men: John Cusack in "The Sure Thing," Matthew Modine in "Gross Anatomy," and Rick Moranis in "Spaceballs" (OK, maybe "hot" is the wrong word). But none of these roles or leading men could prepare her for playing Jo Reynolds on "MP," the aggressive, off-putting murderer who fakes her own baby's death and has a five-year on-again off-again relationship with Jake.

Daphne Zuniga: Now
Since leaving "Melrose Place" Daphne Zuniga has been a regular on several series, including "American Dreams," "Beautiful People," and "One Tree Hill." This year she'll return to the big screen in the feature "The Scene," reprising the role she originally created onstage. It seemed like the odds that Daphne would be joining the new series were slim since she said she felt she was in a different place and would only sign on if it meant she got to make out with Grant Show one more time. Zuniga appeared in the seventh episode of Season 1 - reprising her role as photographer Jo Reynolds.


Andrew Shue as Billy Campbell (1992-1998): Then
Before he was Billy Campbell on "Melrose Place," Andrew Shue played soccer in Zimbabwe and had a few uncredited acting gigs, including ones in his sister Elizabeth's movies "The Karate Kid" and "Adventures in Babysitting." Shue would spend eight years having onscreen love affairs with Courtney Thorne-Smith, Kristin Davis, Brooke Langton, and Alyssa Milano.

Andrew Shue: Now
Andrew Shue moved out of the "Melrose Place" apartment building -- and out of Hollywood. He left acting behind and founded Do Something, a nonprofit group that inspires teens to give back to their communities through volunteering. Shue also created the Website ClubMom, a support network for mothers. But if you need a little dose of Shue on-screen, rent "Gracie," the 2007 film he made with sister Elizabeth and brother-in-law Davis "An Inconvenient Truth" Guggenheim, a drama inspired by the death of their brother, William, in 1988.


Kelly Rutherford as Megan Lewis (1996-1999): Then
Kelly Rutherford was a latecomer to the "Melrose Place" cast, joining the show in Season Five. She had already starred in the short-lived dramas "Homefront" and "The Adventures of Brisco County, Jr." But Michael Mancini needed yet another wife, so enter Megan Lewis.

Kelly Rutherford: Now
Following "Melrose Place," Kelly Rutherford kept plugging away, looking for another hit series and playing roles on "The District," "Threat Matrix," and "E-Ring." But it would take another teen soap opera, "Gossip Girl," to introduce her to a whole new generation of drama addicts. Her new marriage to Rufus will probably keep her to busy to return to the courtyard swimming pool any time soon.


Jack Wagner as Peter Burns (1994-1999): Then
Jack Wagner came to "Melrose Place" from daytime soap "General Hospital," where he had shot to fame as Andrew "Frisco" Jones and launched his tween-fueled singing career with the super-sappy hit "All I Need." Wagner joined "MP" to be the ultimate love interest and foil for Heather Locklear's Amanda Woodward, but off-screen he was married to his "GH" love, Felicia Jones (Kristina Malandro Wagner).

Jack Wagner: Now
Jack Wagner returned to daytime soaps in 2003, joining the cast of "The Bold and the Beautiful." Although his marriage to Kristina Malandro ended in 2006, Wagner found off-screen love with his former "Melrose Place" girlfriend, Heather Locklear. Now the question remains, will he follow her back to the apartment?