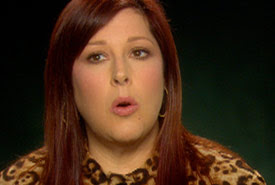 Have you been watching "Celebrity Ghost Stories" on BIO? We have and we LOVE it. But we can't watch it live in its Saturday night timeslot. We have to record it and play it back in broad daylight with the curtains open. Then we immediately follow it up with something fluffy and mindlessly entertaining, like "Ace of Cakes" or "Leave it to Lamas." If we don't take these precautions, we see "Bloody Mary, Bloody Mary, Bloody Mary" in the bathroom mirror while we brush our teeth and have nightmares for days. OK. So, we're not the bravest souls around. But this stuff is freaky.

There are many skeptics out there who say that these stars are just a bunch of C-list (at best) celebs looking for a career boost. Plus, they're actors, so they should tell a convincing tale. Even we confess that some of the stories could easily be extremely vivid dreams, incidents explained away by wild night of partying, or a case of wishful thinking after a traumatic ordeal. But for the most part, "Celebrity Ghost Stories" turned us into believers.


This week on "CGS," Carnie Wilson was back. The singer and Beach Boy offspring was in an episode earlier in the season talking about the night her sister Wendy showed up with a ghost in tow. Apparently the younger Wilson had been followed by evil spirits for years, but neglected to tell Carnie until the night she came to stay over and inadvertently brought an otherworldly companion. Both women independently woke up in the middle of the night to the sight of the spirit — a lanky, faceless, man in a black overcoat and stovepipe hat.

Frankly, that tale left us wanting to hear from Wendy so we could find out more about her years of terror, but instead, we got another story from Carnie. Not that it wasn't a good one. The ghost of a suicidal, alcoholic barber who had offed himself in the basement of the place she was staying, visited the singer and gave her a frightening wake-up call. She went home, joined a twelve-step program, and has been sober ever since. Was it a sign from beyond or a few too many glasses of wine? Either way the apparition scared her straight.

We're not sure if Carnie has any more ghost stories up her sleeve. But if you want more of the woman famous for getting her stomach stapled live online, tune in to "Carnie Wilson: Unstapled" on GNS in January. She'll try to lose 50 pounds of baby weight she gained while pregnant with her second child. We've heard an obese ghost comes back and padlocks her refrigerator, but we're pretty sure that's just a rumor.