"America's Next Top Model": Where Are They Now? 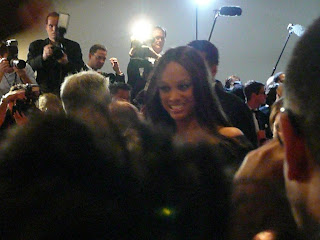 The 2009 season of "America's Next Top Model" ended with a surprisingly unexciting winner (the incredibly forgettable Teyona Anderson) and controversy among the judges. Tyra Banks' supermodel search has been through 12 cycles, and as both Anderson and judge Paulina Porizkova leave Tyra for the dog-eat-dog world of fashion, we wonder what happened to the show's previous catwalk victors and arbiters.


Paulina Porizkova, Judge: Cycles 10 through 12
Last week Paulina went on a media blitz to announce her dismissal from "ANTM" due to budgetary constraints, which seems understandable in these difficult economic times. Porizkova, however, wasn't buying it. Putting the "cat" in "catwalk," she couldn't help but take some swings at her former co-star and boss, Tyra Banks. The jilted supermodel told "Access Hollywood's" Billy Bush that she'd expressed her frustration over the host's chronic tardiness and apparent lack of respect for her co-judges, and was fired as a result. Have the severed ties affected the pair's off-screen friendship? According to Porizkova, Banks never spoke to her unless cameras were rolling. Now that's fierce.

Twiggy, Judge: Cycles 5 through 9
Four years before Porizkova got the ax, fashion icon and judge Twiggy vacated her own seat. The world's first supermodel had been with the show for five cycles, but she left due to "scheduling conflicts" when a production move to New York was announced. Right, that old excuse. Was Tyra more than Twiggy could handle? We'll never know. The super-classy supermodel hasn't dished on the real reason she left. Instead, she's focused on her modeling career through the Models 1 agency, the Sepia Records release of an album, "Heaven in My Eyes" (a collection of 1979 recordings produced by Donna Summer and Juergen Koppers), charitable work for the Fashion Targets Breast Cancer campaign, and the publication of her book, "Twiggy: A Guide to Looking and Feeling Fabulous Over 40.''

Janice Dickinson, Judge: Cycles 1 through 4
When Janice Dickinson, "Model's" resident Simon Cowell, left the show after four seasons, she initially said she was moving on to VH1's "The Surreal Life." That sounded like a lame career choice and a bad cover-up. Turns out it was. The outspoken Dickinson later revealed that she had, in fact, been fired by Tyra. Always wanting to get the last word, she said of Banks, "Tyra's no walk in the park. Tyra's really righteous." Crazy as she is, Janice has done just fine. After "The Surreal Life," she decided to give Tyra a run for her money with her own runway reality shows, "The Janice Dickinson Modeling Agency" and "Abbey & Janice: Beauty & the Beast." Most recently she came in second in the British version of "I'm a Celebrity… Get Me Out of Here!" and will join the American cast of the series when it returns in June.

Kimora Lee Simmons, Judge: Cycle 1
Originally, Kimora sat with Janice Dickinson and Tyra Banks as "Model's" oh-so-gorgeous judges. But tensions ran high between Kimora and Janice, and the former left the show at the end of the first season. The move didn't harm Simmons' fashion career any. She continues to run the Baby Phat clothing label with her ex-husband (music mogul Russell Simmons), has her own reality show on the Style Network ("Kimora: Life in the Fab Lane"), and spends a lot of time just looking good alongside her Oscar-nominated actor boyfriend Djimon Hounsou, with whom she is expecting their first child.

Adrianne Curry: Cycle 1 Winner (2003)
Adrianne is "Model's" first and most recognizable winner, despite the fact that she's been disowned by Tyra and was never mentioned on the program after Cycle 6. Curry upset her mentor by stating that she never received one of her grand prizes, a print-ad campaign. Despite the drama, her modeling career took off. She signed with the Wilhelmina Models Agency, hit the catwalk for celebrity designers like Jamie Pressly and Pamela Anderson, and posed for Playboy. But Curry's life completely changed when she joined the cast of VH1's "The Surreal Life" and met Christopher Knight (aka Peter Brady). She landed Knight and a reality show, "My Fair Brady," which chronicled their rocky romance and ultimate walk down the aisle in 2006. These days she can be heard (but not seen) on her weekly NowLive network radio show.

Yoanna House: Cycle 2 Winner (2004)
Proving the superiority of a pretty face and industry savvy over a killer runway walk, House defeated Mercedes Scelba-Shorte for the "Model" title in 2004. And while she enjoyed some immediate runway success, her spokesmodel career really took off: first with a spot for the "Declare Yourself" voting campaign and then as "the face" of the CW network. Her hosting career is even hotter; she replaced Elisabeth Hasselbeck on "The Look for Less" when the latter left for "The View" in 2005. She also helmed the reality series "Queen Bees."

Eva Pigford: Cycle 3 Winner (2004)
Eva did NOT steal fellow competitor Amanda Swafford's crystals, but she DID steal "Model's" Cycle 3. Having built an impressive portfolio with such companies as CoverGirl and Avon and booking spreads in Elle and In Touch magazines, Eva did what any ascending supermodel would do. She fired her managers (in this case, Tyra Banks and her partner, Benny Medina) and changed her name from Eva Pigford to Eva Marcille, her middle name. OK, we get the name change on an emotional level, but her reasons behind it seem more super-ego than supermodel. Apparently, she didn't want her industry success to influence her ability to find acting gigs. She wanted to earn her roles on talent not fame. To which we ask, "How many people really know who Eva Pigford the model is?" Oddly, the move might have worked. After a string of bit parts, Eva joined the cast of "The Young and the Restless" and was made a series regular, playing, coincidentally, a character named Tyra.

Naima Mora: Cycle 4 Winner (2005)
Not your typical top model, the shy girl with the Mohawk compensated for a lackluster season with a killer performance in her "final exam" (the runway show), according to Tyra Banks. Mora graduated to working-model status in print for Radar, Fuego, and Teen People magazines, and on the runway for Christopher Deane, Carlos Miele, and Walmart. She's also done shoots with her sisters (including her twin, Nia). And since reality show stars often collide these days, it seemed inevitable that Naima would hit the catwalk for "Project Runway" designer Joe Farris in 2008. Proving she's more than just a pretty face, Naima fronts the band Chewing Pics, which released the "Tarantula" EP in 2008.

Nicole Linkletter: Cycle 5 Winner (2005)
At the tender age of 19 years and nine months, Linkletter was "America's Next Top Model's" youngest winner. She's currently doing print work for magazines, including "Women's Health and Fitness," and cosmetics campaigns for CoverGirl. She's also walked the runway for bebe and alice + olivia. But like so many of her "ANTM" alum, Nicole's moved into video, hosting Fashion Week highlight clips for VH1, appearing in a PlayStation commercial, making appearances on "The Tyra Banks Show," and sitting in the judges chair at the 2006 Miss USA pageant.

Danielle Evans: Cycle 6 Winner (2006)
During Cycle 6, the judges debated Evans' possibly career-damaging Southern drawl. After all, she'd have to shoot CoverGirl commercials. But her strong portfolio and killer walk won her the prize. Turns out all the worrying about her accent was a waste of time. Since winning "Top Model," Danielle has not only done print and runway work, but she's also starred in several CoverGirl commercials, including a series called "My Life as a Cover Girl," which ran on the CW during the fall of 2006.

CariDee English: Cycle 7 Winner (2006)
CariDee's "ANTM" stint had its highs and lows. She won the acting challenge and appeared on "One Tree Hill," she ticked off "Model" judge Nigel Barker by joking about the stick up his butt, and she made out with a male model in Barcelona despite having a boyfriend back home (you can decide for yourself if that one's a high or a low). Besides print and runway work, CariDee is hosting her own Oxygen show, "Pretty Wicked," which gives personality makeovers to girls who use their good looks to their advantage. A psoriasis sufferer herself, she has become the spokeswoman for the National Psoriasis Foundation, raising awareness and encouraging people to seek treatment. Always the competitor, CariDee played in the Seventh Annual World Poker Invitational at the Commerce Casino in Commerce, California, in 2009. Unlike "ANTM," however, she did not win the grand prize.

Jaslene Gonzalez: Cycle 8 Winner (2007)
The Puerto Rican-born Gonzalez was a solid Cycle 8 contender, so her title victory isn't surprising. She's rounded out her portfolio of magazine and catwalk work with international Spanish-language CoverGirl commercials. As a former survivor of domestic violence, she became part of the "Love Is Not Abuse" campaign that focuses on teen-dating violence. And in true supermodel fashion, she's appeared in a music video, for Ryan Leslie's "Addiction." One of "ANTM's" most popular contestants, Gonzalez was up for one other prize in 2007: the Teen Choice Award for "Female Reality/Variety Star." This time she lost, to Lauren Conrad of "The Hills."

Saleisha Stowers: Cycle 9 Winner (2007)
Controversy surrounded Stowers' participation. According to the rules, contestants cannot have modeled in national ad campaigns for five years prior to their series stint. Saleisha had been in a Wendy's commercial, but the producers deemed that it wasn't technically modeling experience, so she was cleared. But plenty of fans called foul anyway, especially when they learned that Saleisha had gone to Tyra's Camp T-Zone and made appearances on "The Tyra Banks Show," as well as Cycle 6 of "America's Next Top Model." Was she a legitimate contestant or a plant from Tyra's team? Who knows? Regardless, Saleisha won Cycle 9 and embarked on a solid magazine and runway career.

Whitney Thompson: Cycle 10 Winner (2008)
Thompson was "ANTM's" first plus-sized winner. The judges overlooked her seemingly fake personality and pageant-y ways to crown her the runway queen. After leaving the show, Whitney signed with Elite Model Management, has appeared in "Seventeen" and "In Touch Weekly" magazines, and walked the runway for JCPenney, Little in the Middle, and House of Deréon.

McKey Sullivan: Cycle 11 Winner (2008)
Thanks to the legendary "Top Model" makeovers and a Cycle 11 cast that had two Brittanys already, Brittany Sullivan went from a forgettable redhead to McKey Sullivan, a stunning short-sheared brunette. The transformation made her the season frontrunner with a series of impressive shots for her portfolio. McKey has since kicked off her new career on the cover of "Forest & Bluff" magazine and in runway shows for Mada van Gaans, Ready to Fish, and G-Star. But her biggest style honor since "ANTM"? Being named one of "People's" Most Beautiful of 2009.

Teyona Anderson: Cycle 12 Winner (2009)
After a less-than-impressive CoverGirl commercial turn, an underwhelming final photo shoot, and a Barbie-doll stiff catwalk, Teyona Anderson overtook bug-eyed, nosebleed-loving pixie Allison Harvard to become "America's Next Top Model." Will she find success? If she channels whoever she was in this "embody the color yellow" photo shoot, she might stand a chance.