"The Biggest Loser" Pulls out the Big Gunn 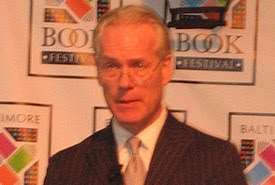 If we had to pick one reality TV personality to be our all-time favorite, it would have to be Tim Gunn. The fashion guru, style counselor, and all-around sweetheart came into television consciousness as the mentor on "Project Runway," and this week our reality worlds collide as he takes on "The Biggest Loser."

For the third season, he'll offer fashion advice to the final six competitors on our favorite episode of each season: the makeovers. Understandably, most of these contestants have a lot of issues when it comes to shopping and accepting their new selves. But Tim takes them by the hands, leads them into Macy's, and helps them find their inner confidence to match their new outward appearance.


We've become accustomed to this kind, compassionate Tim on "Project Runway," where he advises the designers during their creative process. He said in a recent interview that he never criticizes something he knows the contestants can't change; instead, he looks at what they have and encourages them to "make it work."

We look forward to Tim's words each week, and even though we're not designers (we don't even own any designer clothes), he somehow comforts us as he makes his rounds and encourages the "PR" competitors. At the risk of sounding extreme, we wish Tim Gunn were our dad‚ (or at least a very eccentric, supportive uncle) who could guide us through life’s twists and turns with a sympathetic nod or a caring and astonishingly helpful suggestion.

We warned you: we're a bit over the top for Tim.

Imagine our glee when he got a show of his own, "Tim Gunn's Guide to Style." Bravo describes the show as one where he "leads fashion-challenged women on an emotional journey to unearth their personal style." Now as mentioned, we fit the first category to a T. We're not that into fancy clothes. We don't get worked up about makeup or accessories. We're not very girly girls. And even though we're personally not too fond of "emotional journeys," we would kill for a chance to let Tim Gunn make us over. We'd let him turn our measurements into a computerized 3-D rendering of our less-than-perfect physiques. We'd agree to go bra shopping and to toss out every garment in our closets to be able to spend one day with the most sensitive, endearing man on the planet.

So, we think that "The Biggest Loser's" final six — Liz, Allen, Tim, Rebecca, Rudy, and Amanda — are the luckiest folks around. Last season, Tim's time on the show was too short. We're hoping they expand his role and give us a little less of the harsh, Gordon-Ramsey-of-hairstylists, Tabitha Coffey from "Tabitha's Salon Takeover" and "Shear Genius," who reworks the contestants' hair and makeup. This time, we'd like to see in detail the guidance he offers them during this crucial stage of their transformations. In an interview with "The Insider," he said, "They haven't been able to wrap their brains around the new size. They don't know how to dress it, so to be able to be with them and to nurture and guide them, is an honor."

We look forward to see what Tim has in store for the "Losers" tonight. We predict Amanda will achieve the best results, but you never know what tricks Tim Gunn has up his sleeve for all of them. And we know that they will all feel like a million bucks when he's finished.

Written by Amy & Nancy Harrington
Originally for Sodahead.com
Posted by Pop Culture Passionistas at 2:00 AM