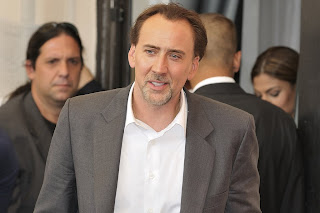 News broke recently that Nicolas Cage owes $6.3 million in back taxes and that he's suing his business manager, Samuel J. Levin, for incompetence that caused him the huge tax liabilities and "catastrophic financial losses." It's pretty common knowledge that Cage is a brilliant actor ("Raising Arizona," "Moonstruck," "Adaptation") who has made more than his share of missteps, both professionally ("The Weather Man" and "Bangkok Dangerous") and personally (Lisa Marie Presley and some of those hairdos). But that's just scratching the surface of the Oscar-winning star. We've unearthed the strange ways he's dedicated himself to his acting craft, his eccentric passions and possessions, and his dangerous family background. Get to know Nicolas Cage a bit better by checking out these weird facts about the man and his career through the years.
Eating Bugs Was His Idea
Always the consummate method actor (or maybe just plain crazy), Nic once ate a real cockroach in a movie. Actually, he ate a trio of real cockroaches, because it took three takes to get it just right. While filming 1989's "Vampire's Kiss," Nic did his own stunt eating and swallowed the crusty insects. Still, he has no one to blame but himself. The script had his character eating raw eggs, but Cage didn't think that would be weird enough.

He Once Had a Pet Octopus
Nic has been known for owning exotic animals. He admitted once to having a pet octopus, claiming that studying beings that are totally different helps him with his acting. Guess that also explains the salt-water sharks, the lizard, and the crocodile. For a time, he even had two pet King Cobras (Moby and Sheba) that he would observe for hours from a specially constructed cell in his home, with a glass of wine in his hand and a bottle of poison antidote very nearby. One night he mentioned his pets on "The Tonight Show With Jay Leno," and his neighbors immediately began fighting to get the poisonous reptiles removed. Cage donated them to a local zoo a short time later.

His Home Is His Castle
Nic is an avid buyer of real estate. He has been known to own up to 15 properties at one time, but he still seems to suffer from a serious case of castle-envy. Even though he once lived in a fake castle on the outskirts of Los Angeles, it has been reported that he always wanted to import an authentic castle from overseas. In July of 2006 he bought the 500-year-old Schloss Neidstein, a mini castle ("mini" in this case meaning 28 rooms, including ten bedrooms and five bathrooms) in the Bavarian village of Etzelwang. Sadly, he sold this property when his recent financial hardships began. But in 2007 he also bought Midford Castle near Bath, England. Maybe this historic edifice will be disassembled and reassembled in the States for Nic? Let's hope he has the sense to leave it be.

He Owned the Shah of Iran's Lamborghini
Nic once said that he sees beautifully designed cars as art. That might explain his insanely huge rare car collection. Over the years he has owned, among many others, a $140,000 Ford GT (which he donated to the Universal Technical Institute shop class), a $100,000 1989 Porsche Sportster (that ended up dumped in a lake after some two-bit car thieves ripped out the stereo), and a 1973 Triumph Spitfire 1500 (that he bought while he was still a ticket-taker at a movie theater, sold because it cost too much money to maintain, and repurchased years later to refurbish). But the most interesting car that Cage has owned is a Lamborghini Miura SVJ. Built for Prince Ali-Reza Pahlavi, the Shan of Iran, the car was confiscated from the Imperial garage in the 1979 revolution and was sold at a 1995 auction. Cage bought the car in 1997 for $500,000 and kept it until 2004.

He Proposed to Patricia Arquette the Day They Met
The story goes that Nic told Patricia on the day they met that he loved her and was going to marry her. She then gave him a scavenger-hunt list of impossible tasks to prove his love. When he returned with several of the items she requested (including reclusive author J. D. Salinger's autograph), Arquette fled, frightened by the intensity of his enthusiasm. It wasn't until they met again eight years later that they fell in love and wed. Guess Patricia should have listened to her gut the first time. The couple separated after nine months, though their divorce was not finalized for another four years.

Nic Is Obsessed with Comic Books
Most people know that Cage starred in 2007's "Ghost Rider," a Marvel comic movie. He also has a new Marvel comic movie coming out, "Kick-Ass"; this time he plays a cop, not the superhero. But did you know that he once had the biggest celebrity comic book collection ever, which sold at auction for $1.68 million? Or that Cage and his older son, Weston, wrote a comic book series called "Voodoo Child"? In fact, Cage loves comics so much that his stage name was taken from a comic book character, Luke Cage, and his son with his third wife, Alice Kim Cage, is named after none other than Superman himself, Kal-el.

He Goes a Long Way for a Good Collectible
There must have been an easier way to get a behind-the-scenes tour of Graceland, but in August 2001, Nic decided to take the exclusive walk-through by wedding the King's daughter, Lisa Marie. Although not as creepy as her previous union with Michael Jackson, this marriage was odd because of Cage's obsession with Elvis. On top of the shrine to the King that he kept in his house, Cage based his character in "Wild at Heart" on him, and he donned a white-spangled jumpsuit in the Elvis-riddled "Honeymoon in Vegas." Not surprisingly, the marriage lasted only four months.

Don't Make the Coppolas an Offer They Can't Refuse
Forget the ex-wife melodrama, Nic Cage (born Nicolas Kim Coppola) is the first to admit that his own family is surprisingly similar to the one featured in his uncle's legendary series of "Godfather" movies. In addition to Oscar-winning director Francis Ford Coppola, Cage's clan also includes his Oscar-winning grandfather, Carmine Coppola (composer of "The Godfather: Part II") and Oscar-winning cousin Sofia Coppola (director of "Lost in Translation"). But they have more than just their talent in common, according to Cage. "It's a family that's loaded with grudges and passion," he explained. "We come from a long line of robbers and highwaymen in Italy, you know. Killers, even." Good genes to have in the cutthroat world of Hollywood.

Written by Amy & Nancy Harrington
Originally for GetBack.com
Posted by Pop Culture Passionistas at 9:16 AM