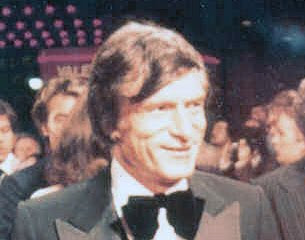 Burlesque star Dita Von Teese is baring it all for the December issue of German playboy. Posing in stockings and suspenders, as well as PVC boots, the star certainly lives up to her sex symbol status.

But Von Teese's cover is just one in a long list of stars that have graced the famous men's magazine. And if anyone knows a thing or two about sexy stars, it's Hugh Hefner!

Many of his girls have gone on to fame and fortune after gracing the cover of his magazine. And conversely, some of Hollywood's biggest stars have boosted Playboy's sales with alluring, enticing cover shots. There are even those celebrities who are so rich and famous that only minimal skin was required to join the party.

Here's our list of our favorite celebrity cover models over the years. Sexy or not, here they come.

10. Barbra Streisand, October 1977
Love was ageless and evergreen for Babs in 1977: "A Star Is Born" earned her an Oscar, a Golden Globe, numerous Grammys, a Barbara Walters interview, and a Playboy cover. Her pose was mildly alluring, but we're guessing the inside photo spread of a nude Nureyev with Michelle Phillips was a little more Hef's speed.

9. Madonna, September 1985
The cover might not be anything to make the Material Girl blush, but the nude pics inside brought Madonna to court. Seems the photographer who she posed for before she was the Queen of Pop sold the photos to Playboy and Penthouse. Madonna had not consented. What she did eventually consent to was the huge amount of free publicity that helped propel her to superstardom.

8. Sally Field, March 1986
Mention the name Sally Field and sexpot is not necessarily the first word that comes to mind (think Gidget, The Flying Nun, Brothers & Sisters). But back in the day, Sally had it going on. In 1986 she was between films, but she got a little career boost, Hef-style, with her cover pose in bunny tail, fishnets, and all.

7. Burt Reynolds, October 1979
Burt has been on the cover of Playboy only once, fully clothed. But from 1973 to 1983 he was featured seven times in Playboy's famous annual "Sex Stars" pictorials. Still, probably his best-known spread isn't in Playboy at all; it's that unforgettable Cosmo shot on the bearskin rug.

6. Joan Collins, December 1983
Joan was 49 when she posed for a 12-page pictorial and the cover of Playboy. That same year she starred in a made-for-TV movie called Making of a Male Model, in which she seduces a young man half her age. At the time she was often called "The World's #1 Sex Symbol." Today we'd just call her a cougar.

5. Farrah Fawcett, December 1978
It's probably not as well known or as scintillating as her famous bathing suit poster, but we're sure this cover was the favorite of many a teenage boy when it appeared in '78. Still, despite the sexy cover, Farrah refused to pose nude for the pages of the magazine at least until 1995. That issue became the best-selling one of the '90s, selling four million copies.

3. Sharon Stone, July 1990
Until 1990 Sharon Stone was not a household name. But after "Total Recall" with Arnold Schwarzenegger and a cover and nude photo spread in Playboy, Sharon was off and running to major Hollywood stardom. But was it her acting prowess or the buff bod from all those hours in the gym that did the trick? Since Playboy listed her in the "Top 25 All-Time Sexiest Stars of the Decade," we're guessing the latter.

2. Ann-Margret, October 1983
The same year that Ann-Margret made a TV movie playing a dying mother of ten children, she posed for her Playboy cover. Now there's two ends of the spectrum for you. She won the Emmy for Who Will Love My Children?, and we're guessing she won a few hearts for this cover.

1. Raquel Welch, December 1979
Welch's career might have been waning in 1979 (her career highlight that year? A two-part guest appearance on Mork and Mindy), but her sex appeal was still at an all-time high. The cover headline read, "A Celebration of the Decade's Most Desired Women." Raquel definitely tops our list.


Written by Amy & Nancy Harrington
Originally for GetBack.com
Posted by Pop Culture Passionistas at 10:26 AM