These Globetrotters Know How to "Race" 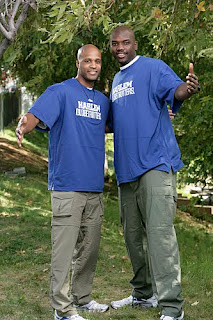 Let us be very clear about something from the get-go. We LOVE reality TV. Pretty much all of it. From "Survivor" and "I Survived a Japanese Game Show" to the "Real World" and "The Real Housewives of Atlanta." Competition. Docudrama. Design and cooking shows. We dig them all.

But as the Emmy committee consistently reminds us every year, "The Amazing Race" is the greatest reality show of all time. Not only is it almost impossible to produce (try shoving your backpack in a sardine-like Indian train car, let alone your cameraman and sound guy), but the casting is perfect every year. There's always the weird-family-dynamic pair, the whiny-girl duo, and the clearly-not-meant-for-each-other couple. The formula may be predictable, but it's always entertaining.
Still, this season we've been introduced to a new kind of racer: The Globetrotter. Sure, there have been other celebrity contestants before (if you're into reality TV as much as we are, you consider Rob and Amber from "Survivor" celebrities). But Flight Time Lang and Big Easy Lofton are especially cool because they're actually part of the legendary comic basketball team the Harlem Globetrotters.

As a result, they bring a unique skill set to the competition. Obviously, they are big and strong and they're used to the time zone changes and cramped cabins of relentless air travel. But they're also insanely competitive. Just a few weeks ago, they mercilessly taunted the height-phobic Mika at the top of a water slide with comments like, "Don't do it! It's a long way up here." Yet they are still somehow funny and charming (we defy you to watch a clip of their "Soul Train"-inspired Dutch drag folk dance and not get a tiny crush on them). This is a balance of warrior and comedian clearly passed down from such Globetrotter greats as Meadowlark Lemon and Curly Neal.

So we're putting our money on Flight Time and Big Easy to win "The Race." Last night may have been only the second time that they were the first team to arrive at the pitstop mat, but we still think if it boils down to a sprint to the finish (which the contest so often does), they're unbeatable. Have you seen how long their legs are?

In Sunday's episode they showed they have good eye-hand coordination — easily tossing the ring on the red pointy hat to win their Travelocity Harlem Gnome. They proved that they were strong — tossing sand bags around like sugar packets in the explosion challenge. And they were once again lucky. Considering that in the notorious Season 6 hay-bail challenge it took one team eight hours to NOT find a flag, Big Easy uncovered the proverbial needle in a haystack pretty quickly. He scored that first place spot and a sweet Turks and Caicos birthday present for his buddy Flight Time while he was at it.

They've overcome obstacles before "The Race," too. Flight Time gets his nickname for making his first dunk when he was just a junior in high school and only 5' 10".  And following Hurricane Katrina, Big Easy saved 13 members of his family and friends when he and a couple of his buddies pushed the group in a pickup truck from the projects, where many of them lived, to a nearby church. Once there, they were able to get help and evacuate to Houston.

Still want the beauty queen and her boring husband to win?

Originally for Reality Bites at SodaHead.com

Posted by Pop Culture Passionistas at 12:09 AM