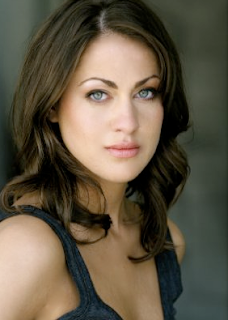 We love reality TV, and we love a good family drama. But we do not like when these worlds collide.

Needless to say we were a little bit taken aback recently when Kevin and Scottie decided to have Scottie's friend Michelle McCormack be their surrogate on "Brothers and Sisters." Now the actress playing Michelle is competent — totally in keeping with the high quality performances we're used seeing on the show. But there was something unsettling about the brunette playing the former party girl. We'd seen her somewhere before, but we couldn't quite put our finger on it. Then it clicked: she's Whitney Port's new friend Roxy on "The City."


Now, we don't blame Roxy Olin for exploring other options. After all, her part on the MTV diva-drama so far has been that of the whiny, boring friend of the one character we thought couldn't get any whinier or more boring herself.

Even though she's been set up as the Season 2 backstabber, frankly, she hasn't caused nearly enough commotion to go down in docudrama history, like Speidi and Kristin Cavallari on "The City's" sister show, "The Hills." There are only so many times Roxy can feel rejected because Sammy doesn't like her. And, frankly, the tension could've been cut with a butter knife when she confronted Whitney's fleeting love interest Freddie Fackelmayer (clearly the greatest name on TV EVER) about whether or not he had a girlfriend. And if you want to see what it looks like when two monotone reality stars get into a fight, watch last night's episode to see Whitney and Roxy's ho-hum "drag-out" backstage at Miami Fashion Week.

But still, Roxy of "The Hills," our Roxy — dare we say America's Roxy? — is not an aspiring actress. She's a young, single girl, living in Manhattan, working at the fashion public relations firm People's Revolution. She's not a surrogate mother for a gay couple looking to start a family.

So how did Roxy get the acting gig? Well, her mom is Patricia Wettig, who plays Holly Harper on "Brothers and Sisters," and her dad is Ken Olin, who not only co-stars as David Caplan but produces and directs the show as well. (If you don't spend your Sunday nights watching the familial weep-fest, you might remember Patricia and Ken as Nancy and Michael on "thirtysomething.")

Now both shows are on thin ice for us. The lines are blurred in that "You've got chocolate in our peanut butter, you've got peanut butter in our chocolate" kind of way. We'll just have to hold out hope that Kevin and Scottie won't go through with this pregnancy — the writing's already on the wall. And we can have the old reality BFF Roxy back, all to ourselves.
Posted by Pop Culture Passionistas at 9:29 AM